15 Things to Do in Seward, Alaska 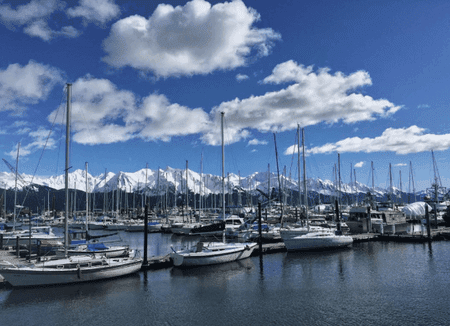 A charming harbor, quirky Alaska bars, world-class hiking trails, jaw-dropping scenery – that’s just a taste of what Seward, Alaska has to offer those who visit the coastal city. Here are just 15 of the many things to do while there.

Right on the shore of Resurrection Bay, the SeaLife Center is Alaska’s only marine mammal rehabilitation center, often taking in injured or orphaned sea animals (in the last year alone it’s taken in a walrus calf and a baby beluga). Check out the educational exhibits and sea animals including harbor seals, sea otters, fish, marine birds and be sure to investigate the touch tank.

We respond to marine mammals in need all along the coast of Alaska. You can help Alaska's marine wildlife too! We operate a 24-hour hotline for the public to report stranded marine animals. You are encouraged to call us if you find a stranded or sick marine animal. Avoid touching or approaching the animal, call first! 1-888-774-SEAL #alaskasealifecenter #thealaskalife #akliving #travelalaska #alaska #alaskan #ak #seward #visitseward #wildlife #aquarium #alaskaliving #alaskamade #alaskalove #aza #associationofzoosandaquariums #ringedseal #seals #marinemammals

Each Fourth of July, men and women from across the globe compete in Alaska’s most famous footrace – racing from downtown Seward up nearly 3,000 feet to the Mount Marathon summit and descending the scree-covered backside of the mountain back to downtown. It’s a 3.1 miles round trip and runners often cross the finish line muddy and bleeding. If you do the trail on any other day, don’t feel like you have to hurry, though. The sweeping views of the city and Resurrection Bay are worth checking out while you catch your breath.

Walk around the small boat harbor

Long-lingers, purse-seiners, gill-netters – the Seward boat harbor is home to 100-plus charter fishing boats and dozen of tour boats. Check out the various vessels’ flair and try to find the ones with the punniest names. Keep an eye out for sea otters swimming and snacking nearby.

Take a selfie with the Benny Benson Memorial

The story goes that in the late 1920s, 30 years before Alaska achieved statehood, a contest was held for children in grades seven through twelve to submit their design ideas for Alaska’s flag. An orphaned 13-year-old Alaska Native boy named Benny Benson submitted the winning design: eight gold stars, forming the Big Dipper and the North Star on a dark blue background. That design can be seen on a humble memorial to Benny at the corner of Seward Hwy and Dairy Hill Lane.

Trek out to Exit Glacier

Part of the Kenai Fjords National Park, Exit Glacier is one of the most accessible glaciers in Alaska – you can drive right up to it in summer months. There is a network of trails that spider around and above the glacier, too.

Have a flight of beers at Seward Brewing Company

Open only during the summer months, Seward Brewing Company has a solid selection of flagship beers and tasty brewpub fare. Bonus: the whole building is an exercise in Seward history. Originally opened as a bar in 1904, it was turned into a theater during Prohibition, then an Elks Club and a dinner club, before finally becoming Seward Brewing Company in 2012. Many of the relics within show that history, including the original Seward Theater seats and Alaska Steamship Logo.

Where else can you paddle within inches of impressive glaciers and scope out marine animals in their natural habitat? There are several shops within Seward that rent kayaks, as well as provide water taxis and offer guided tours.

We've had kayaking on the mind this week as we work to update our various kayaking webpages. Apparently, @jamieetrapp has been thinking about kayaking too. Here's their view of Northwestern Glacier from a trip last summer. 📷: @jamieetrapp #Repost #findyourpark #ocean #kayak #kayakalaska # #kayaking #fjord #glacier #NorthwesternGlacier #kenaifjordsnationalpark #kenaifjords #alaska #alaskanps #nationalpark #FjordLife #fjord

Stay in a public-use cabin

Alaska has oodles of public-use cabins that can be reserved for those looking to be at one with nature. The rustic cabins and yurts are reachable by hiking, paddling, or float planes. Some of the best are within miles of downtown Seward.

Change your perspective by staying overnight in the park this summer! Imagine listening to a tidewater glacier calve while sitting on the deck of your cabin. Make it happen at the Aialik and Holgate Public Use Cabins, now open for reservation for the summer 2018 season. Visit our website to learn more. #cabin #cabinlife #publicusecabin #tidewaterglacier #FjordLife #fjord #alaska #alaskasplayground #alaskanps #kenaifjords #kenaifjordsnationalpark #nationalpark

Participate in the Silver Salmon Derby

The Silver Salmon Derby is one of the oldest and biggest fishing derbies in Alaska (which is saying something in a state whose lifeblood is made up of salmon). Anglers from around the world compete to snag the biggest Silver Salmon, though prizes are offered for the top 5 heaviest, the 49th-heaviest (because this is the 49th state), tagged fish and more.

Groove to the jams at the Seward Music and Arts Festival

After a long summer of hosting out-of-state tourists the Seward locals need to unwind. The Seward Music and Arts Festival caps off the season with a weekend of music and dance performances, handicrafts, and food vendors.

We are very pleased to share the winning logo design for the 2018 Seward Music and Arts Festival! Thank you to Rob Ammerman for your amazing Rockwell Kent inspired design and to everyone else who submitted work!

Pin a dollar to the wall at Yukon Bar

It’s hard to not notice the Yukon Bar if you’re walking in downtown Seward. It’s the go-to place for live music in Seward, with a pint-sized, multi-level stage for musicians to cram onto and one the the many bars in Alaska that uses the dollar bills of customers as wall decor. Write your name on a single, affix it to one of the the walls or one of the lifesavers suspended from the ceiling. Top off your night with a Duck Fart, a shot that is said to have originated in Alaska.

Back at The Yukon tonight! See y'all there. We're talking to you Seward, AK.

Go on a whale-watching cruise

There are an abundance of tour-boat cruises that travel through Kenai Fjords National Park every day, ranging in length from three to nine hours. Cruise guests may be lucky enough to see several species of whales surfacing and breaching, sea otters snacking on clams, sea birds, and more.

Located in on old church, this sweet little coffee shop not only dishes out caffeinated beverages and sweet treats, but also showcases the work from local artists. Bring a newspaper to read or enjoy the people-watching.

Board the train going north

Seward is the terminus of the Alaska Railroad Coastal Classic. It’s possible to drive from Seward to northern cities like Anchorage – hundreds of people do just that every day. Not everybody gets the chance to ride the train from Seward, though. The train gets away from the road, going into the mountains where from the blue and gold train car riders are rewarded with views of alpine meadows, wildflowers, glaciers, and wildlife.