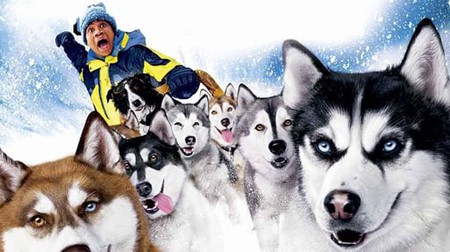 Alaska has long been a popular setting for movies, thanks to its natural beauty and dramatic wilderness. From feel-good animal adventures featuring bears or sled dogs to dramatic thrillers, here are just some of the many movies set in the 49th state.

Balto is a live action/animated adventure drama loosely based on the real life story about the lead sled dog of the same name who helped transport live-saving serum to the diphtheria-ridden town of Nome in 1925. Kevin Bacon voices Balto, who is ridiculed by the other huskies for being half-wolf, until he proves that his wolf sense and speed gives him an advantage during the serum run.

Liam Neeson, true to form, plays the hard, badass alpha male in this thriller about a group of plane crash survivors stranded in the Alaska wilderness. They fight the bitter Alaska elements, a pack of intelligent and hungry wolves and, ultimately, each other.

Cuba Gooding Jr. plays Ted, a goofy Florida dentist who unexpectedly finds out that he’s a) adopted and b) that his birth-mother has passed away, leaving him seven huskies and a border collie in a remote Alaskan town. Incredibly out of his element, Ted tries to learn about his family history and become the alpha of his dog pack.

In this Disney animated comedy, a young Native Alaskan named Kenai kills the bear that killed his older brother, Sitka. The Spirits turn Kenai into a bear in retribution. Kenai has to enlist the help of a talkative bear cub and a pair of dopey moose to help him amend his wrongdoings and travel to where the Northern Lights touch the earth so that he can become human again.

This biographical film (and the book of the same name) about the story of Christopher McCandless, an idealistic college graduate who wanders underprepared into the wilds of Denali National Park in an effort to shrug off the material world, but ends up dying in an abandoned bus, is a polarizing one among Alaskans. For some, McCandless is a visionary pilgrim who encompasses the untamed spirit of Alaska, for others, he’s someone who met his end because didn’t respect Alaska’s wilderness.

One of Christopher Nolan’s earliest works, this psychological thriller is set in the fictional fishing town of Nightmute, Alaska. Al Pacino plays a sleep-deprived detective working on a murder investigation. The round-the-clock summer sunlight in northern Alaska makes the detectives sleep problems worse and warps his sense of reality.

In this romantic comedy set in Alaska, Sandra Bullock plays a difficult executive who is about to be deported for having an expired visa. She bullies her employee, Ryan Reynolds, into giving her a green card marriage so she can stay, but to convince the authorities of the “legitimacy” of their love she must spend time with his family. While the move was set in Sitka, Alaska, it was really filmed in Rockport, Massachusetts.

Based on the true story of Operation Breakthrough, Drew Barrymore and John Krasinski play a Greenpeace volunteer and a news reporter who try to save a group of gray whales that are about to be trapped in the rapidly forming winter sea ice near Point Barrow, Alaska.

When the small (fictional) town of Mystery, Alaska is chosen to host a hockey game against the New York Rangers of the National Hockey League after an article appears about their weekly Saturday night games in Sports Illustrated the townspeople get a little… overexcited.

Based on the Jack London novel of the same name, Ethan Hawke plays a California gold prospector who comes to Alaksa to take up his deceased father’s mining claim and the wolf/dog hybrid named White Fang that he befriends along the way.