Where To Eat Out In Auburn, Alabama

Perhaps best known internationally as the home of the American football team, The Auburn Tigers, Auburn in Alabama has much to discover. Aside from football this delightful town near the foothills of the famous Appalachian Mountains, is also a cultural and culinary hot spot. We introduce you to ten of the best restaurants in the area. 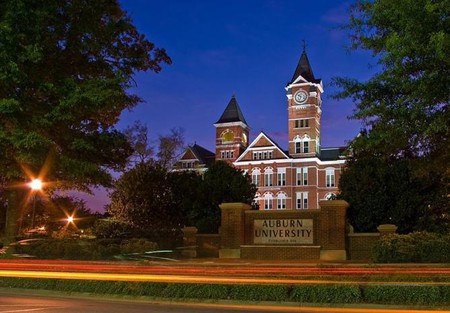 The trending Amsterdam Cafe is deeply indebted to Vincent Van Gogh. The menu is predominantly southern fare, with dishes including seafood and steak. You’ll find classics such as bisque and burgers and the lobster rolls are particularly noteworthy. As an added bonus for football fans, the cafe is well within walking distance of Auburn stadium, perfect for a pre or post-game treat.

Cafe, Coffee, Tea , Vegetarian, American, $$$
Facebook
Email
Twitter
Pinterest
Copy link
Share
Map View
As the name might hint, Crepe Myrtle specializes in crepes with a variety of fillings, savory and sweet, to suit any time of day. The cafe itself is airy and light, with a relaxed, creative vibe. The next door garden provides fresh plants which are dotted about the cafe. When you have finished eating, top off your visit with a visit to the nearby market, which sells locally made products as well as standard farmers market fare.
Open In Google Maps
1192 South Donahue Drive, Auburn, Alabama, 36830, USA
+13348870887
Give us feedback

The family owned Hound bills itself as offering ‘American classics, top shelf bourbon, and 28 craft beers on tap’ with an atmosphere modeled on a smoky hunting lodge, focusing on ‘bacon, bourbon, community, and family’. With this all-American sentiment comes a barn-like interior with long benches, good beer, and excellent food. Reviewers have praised the atmosphere and the excellent burgers and brunches.

The upscale Maestro 2300 specializes in Mediterranean and Spanish fare. Its story starts several years ago, with owner Allen Harris’s business commitments taking him frequently to Europe. When he returned to Alabama, he couldn’t stop thinking about the food of the Mediterranean. People have flocked to Maestro 2300 ever since, praising excellent food, service and music.

Bar, Restaurant, American, Beer, Wine, Cocktails, $$$
Facebook
Email
Twitter
Pinterest
Copy link
Share
Map View
Moe’s Original BBQ is the result of 25 years of passion for good old American BBQ and the fervor for southern soul food is clearly evident in this much loved restaurant. Though part of a chain of region-wide BBQ venues, each location feels just like an independent store and Moe’s in Auburn is no different. The home-made feel of the interior is complimented by gloriously aged benches and fantastical carvings which are sure to amuse children from four to 94. The food itself has been consistently praised, with the smoked wings a particular favorite.
Open In Google Maps
125 East Magnolia Avenue, Auburn, Alabama, 36830, USA
+13348211430
Visit Website
Give us feedback

Restaurant, American, Fast Food
Facebook
Email
Twitter
Pinterest
Copy link
Share
Map View
Mrs Story’s is a local favorite, where residents go when they crave a good hotdog or a tasty shake. Like many community favorites, this is a small affair. There’s no official website, no seating, and definitely no email. The fact that the current owner-operators are the third generation of the Story family to run the place since its opening in 1952 is testament to the venue’s success. The food served is as consistently delicious as when Mrs Story’s was first established.
Open In Google Maps
1900 Pepperell Parkway, Opelika, Alabama, 36801, USA
+13347491719
Visit Facebook page
Give us feedback

The American drug store was a staple of the United States in the mid-20th century. Drug stores such as Toomer’s were the place for young adults to hang out drinking milkshakes. Toomer’s continues this fine tradition of Americana into the 21st century. Theses days there’s more on the menu than just milkshakes, with all-American food on offer such as burgers, fries and hot sandwiches galore.

Cafe, American
Facebook
Email
Twitter
Pinterest
Copy link
Share
Map View
This small and cozy, French-inspired Ursula’s Museum Cafe is part of the Jule Collins Smith Museum of Fine Art at the University of Auburn and both are well worth a visit in their own right. There’s a lunch menu as well as tapas, beer and cocktails on offer.
Open In Google Maps
901 South College Street, Auburn, Alabama, 36849, USA
+13348441484
Visit Website
Give us feedback

Off the beaten path and closer to the nearby city of Opelika, Warehouse Bistro is without a doubt worth searching for in the industrial area where it has been located since 1993. The menu features a mix of continental and American cuisine, accompanied by an award-winning wine list. Warehouse Bistro is casual fine-dining with an affordable price tag.