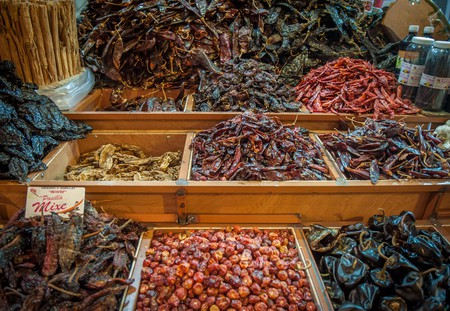 Yucatán’s ancient Maya history is still strongly evident in the region’s food and the methods used to prepare meals. These roots have resulted in one of the most creative (and delicious) regional cuisines in Mexico.

Yucatán is rich with ancient Maya history, lush tropical rainforest, cool cenotes (natural freshwater sinkholes) and mouthwatering cuisine that is different from what one would typically think of as Mexican food. How and what Yucatecos (the name for residents of the state) eat has been greatly influenced by the area’s Maya roots.

According to Silvia, manager of the restaurant Emara Antojitos Yucatecos, “Food means everything to Yucatecos, from the preparation, to dining, to relaxing together at the table after the meal. It is a time to do what they love, which is spend time with the family.” Silvia’s restaurant was founded by a Yucatecán family 40 years ago. She adds that“Mexican food is well known internationally and Yucatecán cuisine stands out because of its unique combination of flavors and the traditional way it is prepared.”

The Maya migrated to the peninsula during the Preclassic period around 2500 BC and originally settled in the area that is now Quintana Roo. They built cities in the region that is now Yucatán between AD 300 and AD 900, including New Wonder of the World, Chichen Itza. Their diet consisted of beans (including cocoa beans) squash, tomatoes, corn, avocados, chili peppers and various fruits like papaya, guava, bitter orange, saramuyo (sugar apple), nance, pitahaya (dragon fruit) and mamey. They also ate seafood and some meat, including turkey, which is native to Mexico. However, corn was the most common ingredient in the Maya diet and was eaten at most meals. In fact, in the Popol Vuh, a record of Maya myths, cosmology and religious beliefs – which was written before the arrival of the first Spaniards – it states that the first men were created by the gods from ground-up corn.

Corn is the main ingredient in tortillas, which are utilized in one of Yucatán’s most popular specialties, panuchos. Panuchos are made with a refried tortilla that is stuffed with refried black beans (combining beans and tortillas was also a common practice of the Maya) and topped with shredded chicken or turkey, tomato, avocado, pickled red onion and jalapeño pepper. Salbutes is another dish that also incorporates tortillas – in this case a puffed, deep-fried version that is topped with similar ingredients. 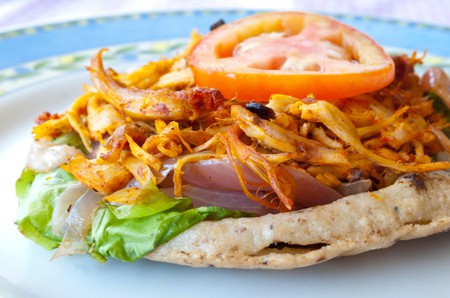 Tamales are also prepared with cornmeal, stuffed with pork, chicken, egg and sometimes other ingredients like ground pumpkin seeds, a spinach-type leaf called chaya and xpelón beans. The tamales are then wrapped in banana leaves and cooked. Although these days most tamales are steamed, the ancient practice of cooking tamales was in a pibil, or pib, which means ‘hole in the ground’ in the Mayan language. The hole is lined with stones and filled with wood and kindling, which is then lit on fire. Larger rocks are then placed inside the hole to conduct heat. Turkey is often still prepared this way in Yucatán, as well as mucbi pollo (also known as pib), an enormous tamale that is traditionally eaten for the Maya version of Day of the Dead, Hanal Pixan. Silvia says that “cooking underground using a pib is the most important Maya practice that is still used to this day.” 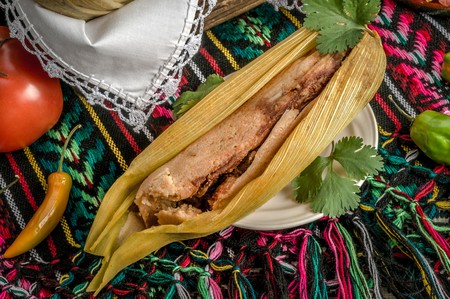 Tamales are made with cornmeal and often meat, and are wrapped with a corn husk | © AGCuesta Images / Alamy Stock Photo

Achiote, a seed from a bush endemic to the region, was used by the Maya to flavor dishes. It was also used as a colorant, because of its reddish tint. These days achiote is used in some of Yucatán’s most well-known dishes, including tacos al pastor and cochinita pibil, a pulled pork dish that is eaten on tacos, tortas (small baguettes) or with rice. Cochinita pibil, or cochinita, which it has affectionately been nicknamed, is also made with naranja agria (bitter orange). The Maya frequently used naranja agria in both food and medicine. Another common Yucatecán recipe that includes both achiote and naranja agria is tikin xic fish (a whole fish wrapped in banana leaf and cooked in a pib). 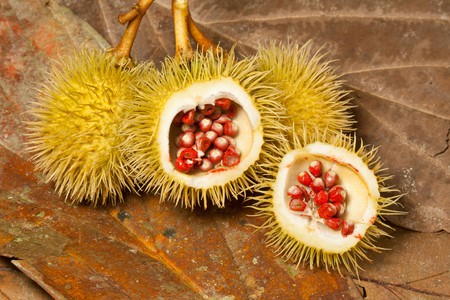 Just like modern day Yucatecáns, the Maya loved their chilies . They added them to food and drinks, including their version of hot chocolate, made from cacao beans. They also used chilies for medicinal purposes. Habanero is the spiciest chili in all of Mexico, and habanero salsa is added to many Yucatecán dishes, including cochinita pibil, salbutes and panuchos. The most popular preparation is a simple yet tasty mixture of chopped habanero, chopped red onion, vinegar or lime, salt and pepper. Xcatic chilies are native to Yucatán and are used to prepare soups and cream sauce. These chilies are also used in recipes for pavo en escabeche (a spicy, smokey turkey dish) and tikin xic fish. 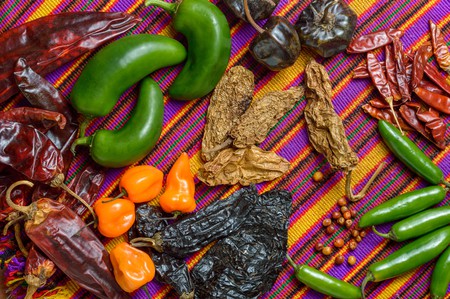 Chili peppers have been used for centuries, even in hot chocolate | © Robert Briggs / Alamy Stock Photo

Maya influence on Yucatecán cuisine is what makes it stand out from other Mexican food. To try authentic Yucatecán food in Cancun, visit Emara Antojitos Yucatecos near Market 28 in downtown.