Your Essential Guide To The XV De Rubí, Mexico’s Most Viral Meme 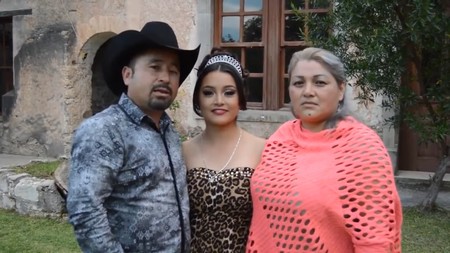 After a long and trying 2016, Mexico has pulled through and saved the day by birthing the meme to end all memes. The XV de Rubí invitation video has been picked up by international news outlets, attracted the attention of several brands, been spoofed by celebrities and prompted millions to say they’ll attend, but what exactly is it? Here’s everything you need to know about the XV of Rubí Ibarra García, Mexico’s most famous soon-to-be 15-year-old.

In Mexico girls traditionally celebrate their 15th birthday with a fiesta de quinceañera, otherwise known as a XV or simply quinceañera. However, one Mexican family have recently raised the bar for all XVs to come. The Ibarras from San Luis Potosí created a video invitation for the XV of their daughter Rubí, in which they stated that ‘everyone was welcome’ to attend. In hindsight, that may have been a mistake because the internet of course took this literally and began to RSVP to the event on Facebook. To date, there are over 1.3 million attendees.

Since the video went viral, many brands have understandably jumped on the XV de Rubí bandwagon, given that the event promises to be Mexico’s biggest and best party of the year when it eventually takes place this December 26th. She’s been offered a trip to Valle Del Bravo by the Governor of the State of Mexico, Eruviel Ávila Villagas, Spotify have created their own XV de Rubí playlist featuring songs such as Tiempo de Vals and Payaso de Rodeo, and the Mexican airline Interjet have offered discounts for those travelling to San Luis Potosí. Even the condom company Prudence claimed they have the ‘balloons’ for the XV de Rubí, positioning themselves as the official sponsor of the after party. Two of Mexico’s largest TV networks, TV Azteca and Televisa, are also supposedly at war over who will get exclusive rights to cover the event.

Brands aren’t the only ones who’ve caught on to the moneymaking potential in this XV party either (which Mexican newspapers estimate will cost the family more than MXN$30,000). Stars such as Gael García Bernal have spoofed the original video, reggaeton singer Maluma has offered to sing three songs at the XV de Rubí, Larry Hernández claimed he’d like to attend and El Komander also registered his interest.

Rubí and her parents have also appeared on several Mexican TV shows and been interviewed by numerous news outlets. When she was featured on ‘Hoy’, the telenovela ‘La Rosa de Guadalupe’ offered Rubí a guest role on the show, while her appearance on ‘Las Tardes con la Bigorra’ cemented her status as Mexican meme royalty. After dancing with her father, she accepted the equally viral star #LadyWuuu (also known as #LadyMenudo) as her godfather. If you don’t know who #LadyMenudo is either, click here to watch the video that made him a viral sensation – you won’t regret it, trust us.

However, the viral video has also gone global. The BBC have their own English-language coverage of it, as do the French press and practically every country in Latin America knows the name of Rubí Ibarra García. Her father Cresencio Ibarra himself readily admitted on ‘Despierta America’ that ‘it’s out of control. Our aim was to host a traditional, regional party. This wasn’t what we expected.’ Although the original video has since been removed from Youtube at the request of the family, there are still various ways to see the invitation.

And of course, this was also the video that launched a thousand memes, several of which pay homage to the now infamous chiva reference. While chiva can also mean ‘goat’, on this occasion it actually refers to a MXN$10,000 prize that the winner of a traditional horse race will be awarded at the XV. However, Rubí’s mother, Anaelda García, states that her favourite meme so far is the one showing Donald Trump and the president of Mexico, Enrique Peña Nieto, coming to an agreement that would allow undocumented Mexicans in the US to return for the party.

In preparation for the estimated 100,000 people that are going to descend on the tiny rural town of La Joya, phone companies have even been looking into installing antennas so revellers can enjoy cell reception while at the XV. In the same vein, newspapers have even written survival guides for would be attendees, given that there are no hostels or hotels in the area and a lack of running water and bathrooms in certain areas. Security forces have also been contracted by the authorities to ensure that all goes smoothly.

Finally, if you want to leave a message for Rubí in honour of her XV, head to this website and send your regards.