Why Rompope Is Guadalajara's Treasured Liquor 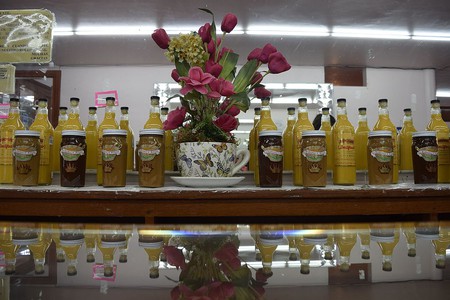 If this is your first time in Guadalajara, or if you visited but didn’t taste it, this is the story behind Rompope, a delicious liquor traditionally enjoyed by grandpas that has been making a comeback.

Basically, Rompope is a sweet drink made with eggs, milk, and vanilla flavoring. It is believed to have been originally made in the convents of the city. For many years, it was believed that Rompope was made only by nuns and monks during the Spanish Colonial era, that’s why it is considered a typical Creole drink.

Several ingredients are sometimes added to the drink, including pecans, almonds, walnuts, cinnamon, pine nuts, vanilla, strawberry, and other local ingredients like pistachio or cacao. That’s where the colors come in: yellow for vanilla, pink for pine nuts, and even green for pistachio flavor.

According to some historians, the word Rompope is a derivation of the word “rompon,” which is used to describe the Spanish version of eggnog that came to Mexico. If you take a trip to Tapalpa, a small town in the mountains near Guadalajara, you will find an abundance of bottles of homemade Rompope. Considering its ingredients, refrigeration is recommended.

Because it is considered a sweet drink, it is customary to have it after a meal. It is also used in the preparation of cakes, cookies, jellies, ice cream, shaved ice, and popsicles.

Even though there are many good brands on the market like Atotonilco, La Holandesa, Santa Clara, or Coronado, some people make it at home. The alcohol is optional, but rum is what is used most often. New generations are reinventing this very old drink, introducing it at the coffee shops or giving it a new appearance in drinks like frappés.

As a digestive liquor, it is perfect for the end of a great meal. Almost everyone in Mexico will remember when they were kids and their grandparents gave them a little glass cup full of Rompope after a Sunday meal.