Where to Find Traditional Aztec Dance Shows in Mexico City 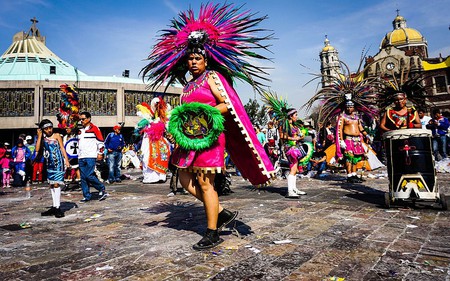 Aztec dance in front of the Basilica | © katiebordner / Flickr

More than 20% of the Mexican population identifies as indigenous, one of the largest percentages in the Americas. Experts believe that there are around 180 indigenous languages spoken in Mexico, which means that pre-Hispanic culture and its dance, music, and stories are an important part of the everyday fabric of Mexicans’ lives. Pre-Hispanic dance troupes are crucial guardians of that culture. 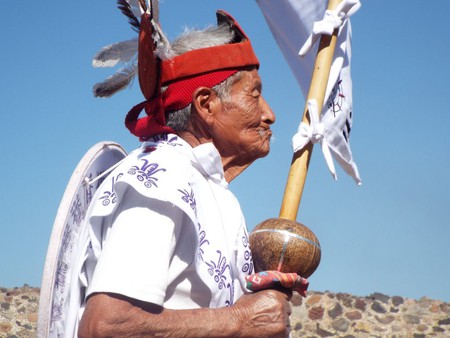 There are various elements important for dancers and the dance itself. The Ixcualmecatl is the dancers’ headdress or the strip of cloth or leather that they wear around their foreheads during the dance. This item represents their willingness, and the color indicates the type of spiritual dance they are doing. The Faja is the thick band of cloth that they wear around their waists—both men and women—to help them be more agile dancers.

Those ayoyotes, or Aztec bells, you see worn around the ankles of dancers are made from the seeds of ayoyote and imitate the sound of rain during the dance. The drums used are called Huéhuetl and were originally always made from tree trunks, giving the tree immorality as a musical instrument. Finally, the Tlamanalli, or offering, that is usually brought to the center or front of the dancing circle has representations of each of the four elements–earth, wind, fire, and water. Each part of a pre-Hispanic dance has unique symbolism and meaning, and most begin with a welcoming to each of the cardinal directions, most likely with burning copal or other types of incense. Dances take place for varying reasons. 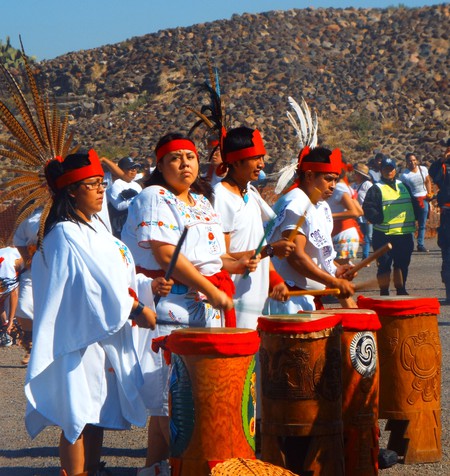 In Mexico City’s main plaza, called the zocalo, you will often find small groups of indigenous dancers. These shows are often put on for tourists to enjoy, and local shamans offer cleansings to passersby. There used to be much more dancing in the zocalo, but recent government efforts to clean the area of vendors and dancers have done away with a lot of the activity. You can also see Aztec dance shows at the Teotihuacan pyramids during the summer and spring solstice days. Indigenous farmers come from all over the surrounding area to dance, offer up prayers and celebrate the changing of the seasons.

In front of the pyramids and directly in front of the Museum of Anthropology on Reforma Avenue, you can also often happen upon the voladores de papantla. They sit perched over 20 meters (65.6 feet) in the air on a pole and slowly lower themselves upside down swinging in a circle. Historians believe that this ritual is connected to a cult of fertility adopted by the Aztecs upon their takeover of the Valley of Mexico. A fifth man sits atop the pole playing an eerie flute as the four other “dancers” descend in a manner that is meant to signify the falling of rain. 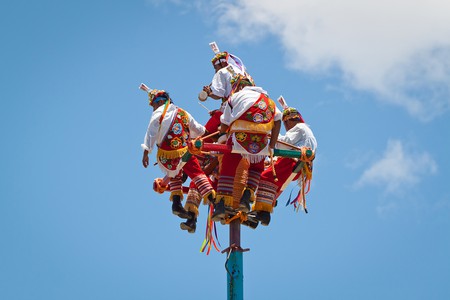 If you happen to find yourself in Mexico City on a protest day, you may curse the slowdown of traffic and blocked streets, but you might just get a chance to see indigenous dance troupes in full swing. They are in particular high turnout at protests that deal with issues of agriculture or global warming.

One of the largest, all-day festivals where you will see Aztec dancers is on December 12th, Virgin of Guadalupe Day, at the Basílica de Santa María de Guadalupe in the southern part of Mexico City. Because the ground on which the Basilica complex stands was also sacred to indigenous peoples before the Spanish, this festival combines Catholic and indigenous religious traditions. Various dance troupes from across the city perform throughout the day in the main plaza in front of the basilica.

Aztec dance in front of the Basilica | © katiebordner / Flickr

Several troupes practice around the city out in the open air, and although you might not always see them in their full regalia, you can still get an idea about the basic moves of the dance and even join in yourself if you are inclined to do so. You can find the group Calpulli Yaoneenqueh at the Monumento a la Revolución Mexicana on Saturday nights at 6 pm. Another dance troupe performs and practices on Thursdays and Saturdays in the main plaza of the southern neighborhood Coyoacan in front of the San Juan Bautista Church. Wherever you happen upon the drums, the flute and the shaking of the ayoyotes, you will surely be transfixed by this ancient representation of Mexican culture.