Welcome to the Wonderful World of San Juan Chamula, Chiapas 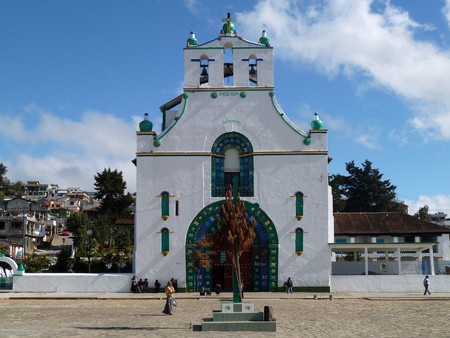 Welcome to the wonderful world of San Juan Chamula, one of Mexico’s most fiercely insular Tzotzil towns, just 10 kilometres (6 miles) from the popular San Cristóbal de las Casas. It boasts a wariness towards outsiders, a penchant for fascinating ancient rituals and beliefs blended with modern Christianity – and one of the strangest churches in Mexico.

Tucked into the Chiapan highlands, Chamula is one of Mexico’s few autonomous townships, with a startlingly high indigenous population – some 99.5% of the residents speak an indigenous language. However, despite the insular nature of the native community and the fact it still serves as one of the few post-1994 Zapatista uprising EZLN strongholds, it is one of the most visited Tzotzil towns in Mexico. 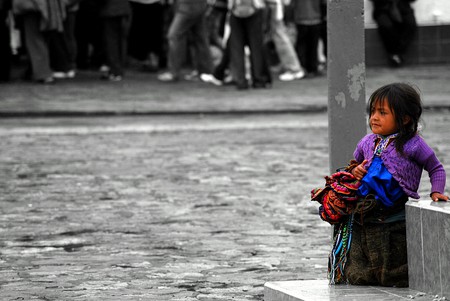 If you’re particularly spiritual, this is the place for you, as shamanism is believed in and practised, while the surrounding forests are said to be filled with spirits. Those who scare easily may be better staying away. Another interesting, and mysterious, site in San Juan Chamula is the cemetery, which doesn’t have a single headstone, but rather a sea of multicoloured crosses, some of which are said to pre-date the arrival of the Spanish. 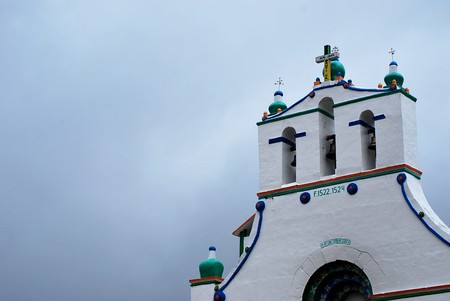 While folk medicine and shamans are taken very seriously, so is Chamula’s own brand of pre-Hispanic Christianity, known as Chamulan Catholicism, something most clearly observed within the confines of the town’s whitewashed church.

Walking in to the Iglesia de San Juan Bautista is an assault on the senses, filled as it is with incense, thousands of burning candles, glistening mirrors (which supposedly help the soul return to its rightful body during prayer) and worshipping locals making offerings, singing and, in some cases, necking Coca Cola or the local alcoholic spirit, pox. It’s not uncommon to see animal sacrifices in this peculiarly seatless, pine-needle-floored building, either.

If you’re thinking of visiting San Juan Chamula, and considering popping into the church to check out the scenes described above, consider that you have to pay to enter, and under no circumstances is photography within the church allowed. This also applies when taking photos of locals, who remain wary of outsiders – absolutely do not take their photos without first asking for permission. Their highly traditional Mayan belief system means they consider that a piece of their soul is stolen with every snap. 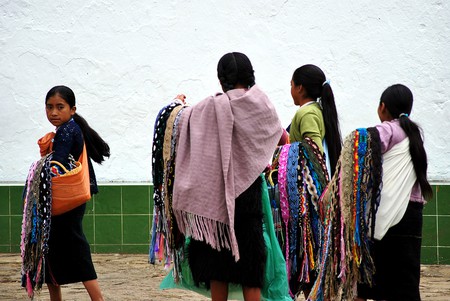 Just as ancient beliefs and an adherence to tradition reign supreme in San Juan Chamula, so do a great communal sense of revelry and love of a good fiesta. Look out for fireworks, dance and general liveliness if you happen to be there while the inhabitants are in the throes of a party. One of the key dates to keep in mind is five days before Ash Wednesday each year, when the fuego nuevo fiesta gets underway (K’in Tajimoltic, in Tzotzil) and the town’s particular brand of pre-Hispanic Christianity is celebrated in all its glory. 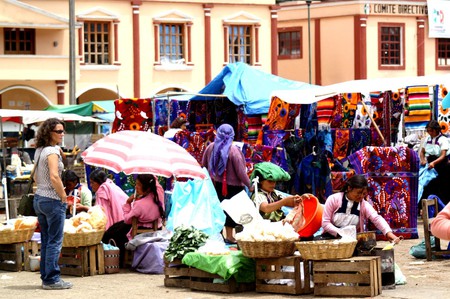 Aside from some baffling but intriguing beliefs, other notable legacies San Juan Chamula has left the world include the rock group Vayijel, who sing in Tzotzil and feature the town in one of their videos, and the incredibly strong pox spirit, which is typically used in rituals.