Top 15 Tracks to Add to Your Playlist Before Visiting Guadalajara, Mexico 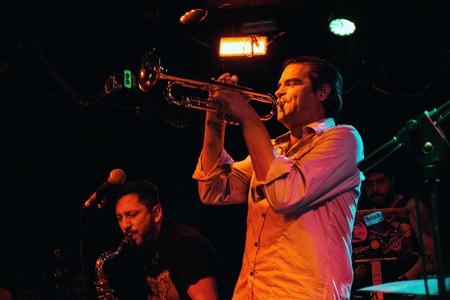 As the home of mariachi, the Mexican state of Jalisco and its capital Guadalajara are an important musical landmark in Latin America. Yet the region is also noted for other genres, including traditional folk, electronica and even jazz. Here’s a rundown of 15 songs that will put you in a Guadalajara mood.

Without doubt the most iconic song associated with the city, “Guadalajara” was written by poet and musician Pepe Guízar in 1937. Countless artists have performed renditions, including non-Mexican artists such as Elvis Presley and Nat King Cole. Yet the most famous version is still that of Guadalajara-born superstar Vicente Fernández.

The Jarabe Tapatío is both a dance and a mariachi song, both of which are among the state of Jalisco’s most well-known cultural exports. Often known in other countries as “The Mexican Hat Dance,” the music played to accompany the dance is among the liveliest (and often loudest) mariachi music you’re ever likely to hear.

The son of Vicente Fernández, Alejandro came into his own in the 1990s, when he released a string of albums that brought massive commercial success. His rendition of “Como Quien Pierde Una Estrella” remains a favorite among fans.

The trumpet player for the Guadalajara-based electro-jazz group the San Juan Project has recently released some solo efforts as well. “Red Ferrari” is a cool, catchy tune that demonstrates the scale of Arturo De La Torre’s talent.

Guadalajara’s most successful indie band, Porter offers an innovative sound that blends traditional rock with electronica. “Rincón Yucateco” from their second album Moctezuma was released to massive critical acclaim in 2015. The song was accompanied by an atmospheric video directed by the visionary talent Jorge G. Camarena.

With his highly distinctive sound and high pitched voice, Juan Son has frequently been compared to musicians such as Björk and Beck. The former vocalist for Porter, the singer’s debut album Mermaid Sashimi was released in 2009 to great critical acclaim. The single “Nada” even earned him a Latin Grammy nomination for Best Alternative Song.

Folk-pop musician Hugo Franco is known for his well-crafted songs and witty, personal lyrics. The catchy love song “Manía,” is the third single from his latest album, Casanova.

In recent years, Guadalajara has become something of a jazz hub, and the band Troker have led the transformation. The six-piece have performed at Glastonbury and are regulars at live venues across the country, where they mesmerize crowds with their fun, creative sound. This year marked a watershed moment for the band, as they released “One Thousand Million Eyes,” their first single with vocals.

Formed in 2001, Montebong are an exciting six-piece that fuse reggae and dub with rock and Latin influences. In May, the band released a live session album with the single “Voy Para El Sur” (I’m Going South) that showcases the band’s lush, vibrant sound.

You might not think of Mexico when you think of the blues, but Abraham and Javier Villaseñor would love to change that. The brothers exploded onto the scene as guitarists for Naranjito Blues in 2012, performing legendary live shows that revitalized the genre in Guadalajara. The band’s single “Coca-Cola” is one of their real crowd-pleasers.

The Guadalajara rapper C-Kan has achieved extraordinary success since 2012, when he launched his debut album Voy Por El Sueño de Muchos (I’m Coming for the Dream of Many). Since then, the rapper has picked up more than three million Youtube subscribers and collaborated with stars such as Baby Bash and 50 Cent. The rapper showcases his lyrical skills on his Round 1 to 4 series.

Hailing from Seville, Spain, the hip-hop crew SFDK have enjoyed underground success in Mexico and toured extensively in the country. The group were so inspired by the capital of Jalisco that they paid tribute to it with their 2012 track, “Welcome to Guadalajara.”

With his furious, high-pitched delivery and off-the-wall lyrics, Guadalajara rapper Maniako has been causing a big stir on the hip-hop scene this year. His single “La Buena Shit” is his best offering to date and has notched up more than 1.5 million views on YouTube.