Tips for Traveling From Oaxaca City to Puerto Escondido 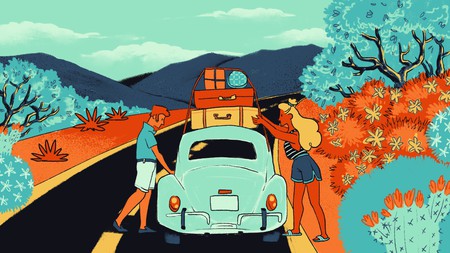 Situated along the Pacific Coast, Puerto Escondido provides a welcome reprieve from the at-times overwhelming bustle of Oaxaca City. While the Mexican pipeline surf break at Zicatela Beach attracts experienced surfers, nearby La Punta Beach has calmer waves that are more appropriate for amateurs. The port city also has an excellent nightlife and a rapidly expanding community of expats.

Figuring out how to navigate from Oaxaca to Puerto Escondido can be an issue, with travelers often receiving conflicting information on how to close the roughly 162-mile (260-kilometer) gap. Here are different options for traveling from one city to another:

Major airlines may cost time on top of money

Flying between Oaxaca and Puerto Escondido is the fastest but most expensive option. Major airlines like Interjet will usually charge between $200 and $500 for a round trip flight. Many of these flights will also include a layover in Mexico City, which definitely seems like an unnecessary hassle for what is normally a 25-minute flight.

Travelers can cut costs by opting for a smaller airline or by hiring a private pilot, both of which have daily flights between the cities using small Cessna planes. The most popular of these airlines is AeroTucan, which has counters in both Oaxaca City’s and Puerto Escondido’s airports.

Flights can be bought online through AeroTucan’s website, over the phone, or in-person at the ticket counter. One benefit is that they allow for more flexibility and can be booked just a few days in advance. One-way flights usually cost around $100 but may fluctuate depending on the time of year. Flights and hotel prices climb between January and March, along with around Christmas and the week of Easter, which are considered the high season. Despite these planes’ small stature, passengers are still usually allowed one large item of luggage and one small carry on.

Travelers who wish to book a private pilot can do so by visiting the airport and asking at the information desk to connect them with a pilot or private plane service that makes daily trips to and from Puerto Escondido.

For anyone traveling from Oaxaca City to Puerto Escondido, the cheapest option is to take a bus. With the journey lasting about 10.5 hours, we recommend choosing the more comfortable ADO bus line. Tickets can be purchased on ADO’s website and cost between $12 and $20 depending on departure time. Two Puerto Escondido-bound buses leave from Oaxaca per day, with most travelers choosing the overnight bus, which allows them to get a full night’s rest and arrive refreshed in Puerto Escondido just after sunrise. Buses can fill up ahead of time, especially during high season, so it’s a good idea to buy tickets a few days in advance. Tickets are also available for purchase ahead of time at ADO’s many kiosks in town or at their terminal.

The company Transportes Villa del Pacífico has local camionetas, similar to passenger vans with about nine seats, that leave from Oaxaca and usually arrive in Puerto Escondido in six to seven hours. Keep in mind that these mini-buses don’t have the same amenities that you’ll find on ADO, such as reclining seats, WiFi, or a bathroom on board. They make fewer pit stops than the larger bus companies, are usually pretty cramped, and take the more precarious route through the mountains that many passengers find nauseating. However, the mini-buses are convenient and leave every hour between 3.30am and 11.00pm and cost around $10.

It’s possible to rent a car and drive from Oaxaca to Puerto Escondido through one of the many rental companies around Oaxaca.

Anyone renting needs to make sure their car is prepared for the journey before leaving. Perhaps the most important thing to look for are sturdy tires that will be able to withstand the many potholes and winding roads found between the two cities. Also, be sure to fill up the tank before leaving Oaxaca City as gas stations can be sparse. By doing so, road trippers should only have to stop occasionally to top their your tank.

Keep in mind that many of the roads between Oaxaca and Puerto Escondido are quite dark after sunset so it’s recommended to only drive during the day. Drivers will likely want to stop at least a couple of times along the way, so it’s smart to leave a larger window of time than may seem necessary. Fallen trees and other roadblocks can potentially slow any journey to the coast. Those prone to carsickness should consider bringing anti-nausea tablets for the winding route.

Turning the drive into an itinerary

The main routes to the coast are via Highway 175 and Highway 131. The latter usually saves about an hour of driving time (around five hours in total as opposed to six). However, with lots of winding and unpaved roads, it might not be worth the trade-off. Highway 131 is also significantly less scenic, and livestock occasionally poses a traffic threat. There are also fewer roadside towns worth wandering in.

For beach-bound travelers that aren’t in a rush, the Highway 175 route is best enjoyed over a couple of days, as it goes through small villages like San Bartolo Coyotepec, San Martin Tilcajete and Santo Tomas Jalieza. All three are excellent places to purchase artisanal black pottery, alebrijes (intricate wood sculptures of mythical creatures thought to deter nightmares) or traditionally woven textiles as souvenirs. Folks making the road trip during the weekend can even take part in Ocotlan’s famous Friday market.

Drivers should keep an eye out for Ejutla de Crespo, which has a Thursday market known for its animal skins. But even for those who decide to bypass this town, it’s a good time to take anti-nausea medicine, as it marks the beginning of having to reckon with some steep hills and curves. Be sure to pack a jacket as the road ascends approximately 9,000 feet (4,743 meters) throughout the course of the drive.

The mountain town of San José del Pacifico is another good place to stop for at least a few hours, if not overnight. It’s known for its local cultivation of hallucinogenic mushrooms, which are most plentiful during the rainy season between April and October. Although hallucinogenic mushrooms are illegal and categorized as a controlled substance in Mexico, law enforcement generally looks the other way when it comes to San José del Pacifico since the mushrooms are associated with sacred practices that have been carried out by Indigenous inhabitants for centuries. Those who decide to participate in the town’s mushroom tourism should be mindful of scammers who sell counterfeit mushrooms. It helps to speak Spanish and ask questions about where the mushrooms were grown, harvested and what sort of effects one can expect.

Even for travelers who decide to skip the psychedelics, San José del Pacifico has a peaceful atmosphere with plenty of hikes to explore the surrounding wooded hills. Simple cabin accommodations can usually be found for less than $20 a night.

Leaving San José Del Pacifico, the route will continue to climb the mountain for 10 more minutes before beginning the descent towards the coast. This portion of the drive is incredibly scenic, with waterfalls, rivulets and wildflowers, although at times these scenes can be obscured by some patches of fog. San Pedro Pochutla, about two and a half hours away from San José Del Pacifico, is a reassuring marker that the road will soon flatten and that warmer temperatures and the beach are ahead.

Be aware that the route will switch onto Highway 200 for the final stretch of the journey, which runs along the coast and ultimately drops off in Puerto Escondido. Highway 200 also gives drivers the option to stop in other beach towns like Puerto Angel, Mazunte and Zipolite.