The Top Restaurants in Guanajuato, Mexico 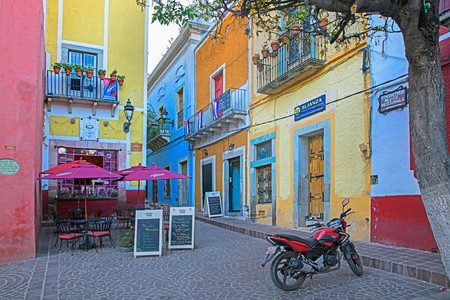 Many of the restaurants in Guanajuato focus on Mexican cuisine, but you’ll find more than just tacos and nachos on the menu here. Chefs take their inspiration from the history books as much as recipe books. So, expect to try time-honored dishes like cochinita pibil – a Yucatan pork stew, tinga – a shredded chicken and chipotle casserole, and gorditas – a delicious cornflour calzone.

You might struggle to decide whether to frame or eat your food at Costal Cultura Cafetera. Typically rustic dishes like black tacos with octopus and cochinita pibil – an authentic pork stew – are immaculately presented on chopping boards and sleek black plates and garnished with surgical precision. Try for a seat on the roof terrace and you can dine in view of the rust-red dome of the Temple of the Company of Jesus.

The food at Oajillo, near the Temple of the Company of Jesus, is served on slates and boards with stylish splotches and streaks of sauce. The menu is a mashup of flavors from around the world. On one page you’ll find dishes like tacos with cecina – a cured meat from Yecapixtla in Mexico – on the next, you’ll find pasta and burgers. Elsewhere, cuisines collide in irresistible dishes like a chocolate brownie with mezcal cream.

The queue of locals often snakes out the door of this yellow-walled restaurant on the way down from the El Pipila lookout. Looks-wise, it’s a plastic-tablecloth sort of place – but there’s no need for white linen and candlesticks when you have food like this. The cooks marinade their homemade tortillas in a secret-recipe sauce, fry them, then top them with mounds of lettuce, potatoes, cheese and tender fried chicken. They don’t serve alcohol, but you can BYOB.

Window-sized artworks hang on the walls of Mestizo in central Guanajuato. The plates are just as pretty here, though. Edible flowers, quenelles and paint-splotches of sauce are all used to present dishes that fuse traditional Mexican and European cuisine. Don’t miss the seared fish in pipian – a green mole – and the ravioli stuffed with aged Mexican cotija cheese and huitlacoche – a truffle-like ingredient that’s grown on corn husks. 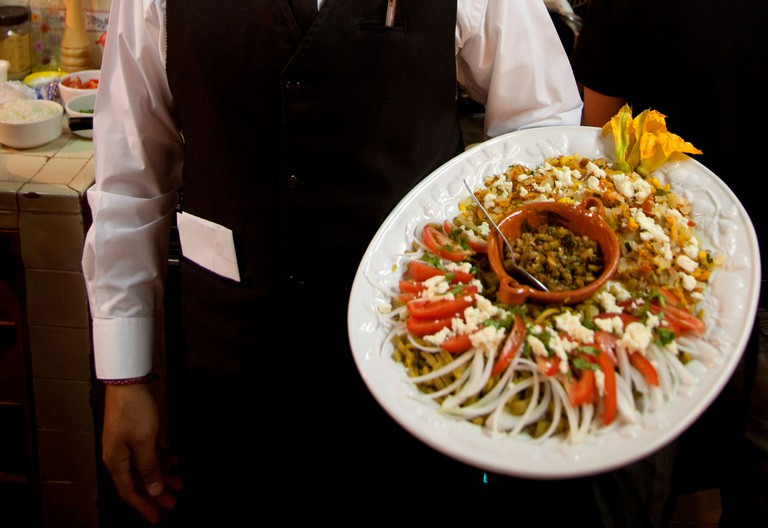 The chefs at Casa Mercedes give traditional Mexican food a 21st-century makeover. Slow-cooked meats, moles and bean stews are topped with micro herbs, edible flowers, emulsions and oils. The restaurant itself has a traditional look to it, with beamed ceilings, exposed stone walls and wooden furniture. You’ll find it in a quiet residential street, a 30-minute walk north of the Plaza de La Paz in the center of the city.

The menu at Los Huacales, near the Juárez Theatre, is twenty-four karat Mexican. It features dishes like tricolor enchiladas served with three kinds of mole sauce and tacos filled with chicken tinga – a stew made from tomatoes, chipotle and cane sugar. The restaurant itself is whitewashed, but shelves of wooden toys and potted cacti add hints of Mexican color. If you want dinner here, visit on a weekend as it closes at 6pm on Tuesdays, Wednesdays and Thursdays.

Sunshine-yellow doors welcome you to this pint-sized restaurant, a few minutes from Plaza de La Paz. Behind them, Mexican seafood dishes are served to tables topped with tropical tablecloths and watering-can condiment holders. One of the highlights of the menu is the marlin gordita – Mexico’s answer to the empanada.

La Table de Andre takes you on a journey across the Atlantic Ocean to France. Beef bourguignon, pate, onion soup and crème brulee are all on the menu at this restaurant, five minutes’ walk from Plaza de La Paz. The one nod to Mexico comes in the form of confit duck tacos. When it comes to a nightcap, take an evening off the tequila and sip a cognac by the restaurant’s wide stone fireplace.

Polished stone floors, metro-tiled walls and industrial lighting set the scene at this sophisticated-looking restaurant in the southeast of the city. The food here is just as grown-up as the design. Aged steaks, muscly octopus tentacles and shanks of meat top chopping boards and fill skillets. If you’re in the mood for a cocktail, try the ronronera amatxi – it’s made with rum, kiwi, lemon juice, cucumber ribbons and sprigs of spearmint and basil.

Just a few minutes’ walk from the Plaza de la Paz, this restaurant is named after Mexican artists Frida Kahlo and Diego Rivera. Their artworks, as well as black and white photographs of the couple, dot the walls. Paella is the eatery’s signature dish. Other highlights include gargantuan steaks and sharing boards. On the drinks front, there’s a good line of cocktails, but if you want the full taberna experience, you should try the pink-labeled Frida Kahlo beer.

Not sorted your place to stay in Guanajuato yet? Book one of the best hotels in the city now through Culture Trip. Extend your Mexican vacation by visiting nearby Mexico City. See the best international restaurants in the capital, perfect for refueling after a day of outdoor hikes and stunning day trips. Alternatively, travel even further afield be seeing the best luxury hotels in all of Mexico.

This is an update of an article originally by Jack Guy.