The Story Behind the Mexican Flag 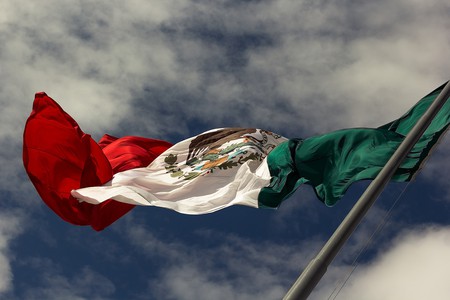 The Mexican flag is the country’s most important patriotic symbol, and it has a background story that is as fascinating and revealing as any national flag. In fact, the story of the Mexican flag dates back further than most, with origins in the Aztec culture that flourished in Mexico from the 1300s. The current crest and colors of the Mexican nation have undergone several changes over time. Here’s our guide to the story behind the modern Mexican flag.

The Eagle in the Mexican Flag

The coat of arms on the Mexican flag depicts an eagle perched on a prickly pear cactus devouring a rattlesnake. The image relates to the story of the founding of Tenochtitlan, the Aztec capital. According to legend, the wandering Aztecs would know where to build their new city when they saw an eagle perched on a cactus. The image did appear to them, but in an unlikely place – on a tiny island in the middle of Lake Texcoco. To build their city, the Aztecs formed a number of small garden islands connected by causeways.

Based on a mistranslation of Aztec texts, the snake was later added to the story by the Spanish. Although the Aztecs revered snakes as symbols of wisdom and creation, the first missionaries reinterpreted the image. To the Europeans, it would come to mean the struggle between good and evil and the triumph of the Christian evangelizers in Mexico.

Today, the coat of arms is in the center of the flag, with a laurel branch symbolizing victory and honor underneath. The image was added to the flag for the Olympic Games held in Mexico City in 1968. Before this date, the flag was sometimes presented without the emblem. However, it looked too similar to the Italian flag, which uses the same colors. 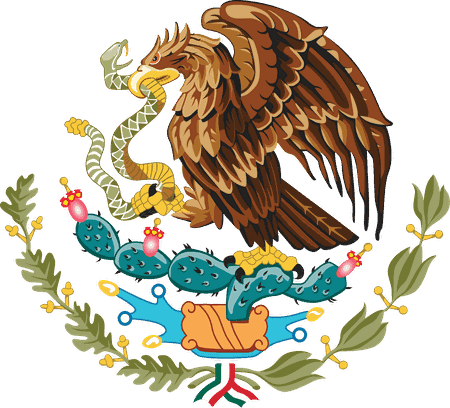 The Mexican coat of arms | © WikiCommons

The flag of Mexico has three vertical stripes in green, white, and red. The design dates back to 1821, when Mexico finally gained its independence from Spain. When these colors were first adopted, the color green was chosen to represent independence from Spain. The red stood for union between the native peoples of Mexico and the elites of European heritage, a union that was key to the independence movement. The color white was adopted to represent the purity of Roman Catholicism.

Today, no official explanation is given for the colors of the flag, partly because the original meanings have little relevance to modern Mexican society. Yet a popular explanation has been taken up by many Mexicans. The green is said to represent hope for the nation, the white represents unity, and the red symbolizes the blood of those who died fighting for the nation’s independence. 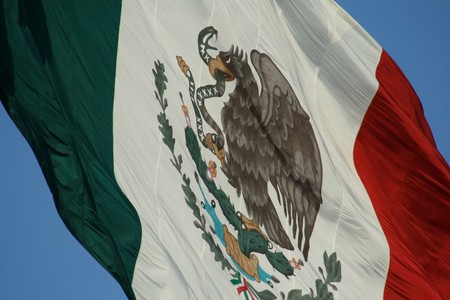 The flag is so central to Mexican identity and culture that it has its own national day, celebrated on February 24 each year. A flag-raising ceremony with the Mexican President Enrique Peña Nieto ended with embarrassment this year, when the giant flag was ripped by a falling metal structure.

However, another ceremony, this one during a military event in Durango, northern Mexico, was an even greater disaster. A sudden gust of wind lifted the flag into the air and a soldier was lifted nearly 100 feet (30 metres) into the sky. After spinning in the air for several seconds, he crashed to the ground. Amazingly, the soldier sustained only minor injuries.

A Symbol of Protest

The flag has also been adopted by protestors in Aberdeenshire, Scotland. Two neighbors have erected Mexican flags alongside the golf course that US President Donald Trump owns in the area. Construction of the course was highly controversial, because it involved destroying legally protected coastal dunes. “It’s just to show solidarity with the Mexican people,” David Milne, one of the locals, told The Guardian last year. “And everyone else that Trump has derided, insulted and intimidated.”