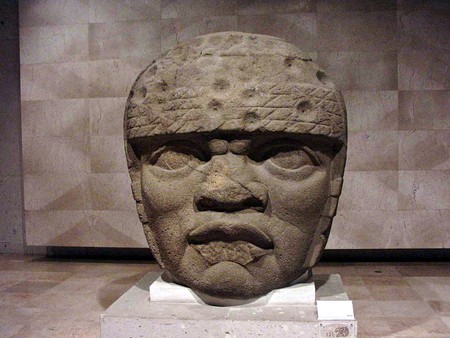 While the Aztecs and the Mayans steal the historical thunder in Mexico, there was a mysterious yet advanced group that came before them, the Olmecs. Little is known of this Mesoamerican civilisation that flourished from 1200-400BC, but nothing baffles that archaeological community more than their mysterious basalt carvings. Here’s what you need to know about the Olmecs of Mexico and their colossal heads.

The Olmecs were an ancient Mesoamerican civilisation based in the Gulf Coast of Mexico, in what are now the states of Veracruz and Tabasco. They are also currently the only civilisation to have been dated to the Stone Age, prior to the birth of Christ and far ahead of more famous Mayans and the Aztecs. Limited archaeological evidence points towards them having been a reasonably sophisticated, if small, group with a probable class structure and a knowledge of engineering, although whether the Olmecs were ever actually unified remains up for debate. There are three primary archaeological ruins attributed to the Olmecs: La Venta, Tres Zapotes and San Lorenzo.

As far as creativity goes, their aptitude for sculpting and carving (even without metal tools) is evidenced, and they’re also known for producing some of the best artwork in the Mesoamerican era, including technically advanced jade and serpentine carvings predominantly featuring dragons, birds and even were-jaguars. The Olmecs were also skilled traders, displaying an influence that reached right down to what is now modern-day El Salvador. 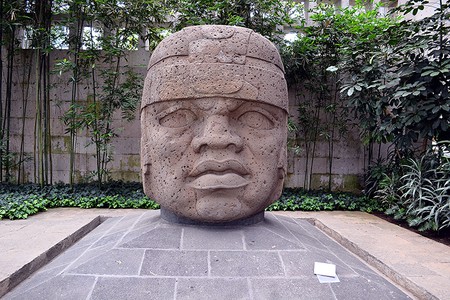 The colossal Olmec heads weren’t formally discovered until the early 20th century, after Matthew Stirling hit upon the Tres Zapotes Colossal Head One in 1938. However, this was only due to a 75-year-old tip-off (of sorts) from oil prospector José Melgar, who had first spotted this enormous stone head in Tabasco way back in 1862.

While most were carved from round boulders, two of the 17 heads are thought to have been carved from ceremonial stone thrones. Interestingly enough, the only colossal stone carving outside of Mexico is found is the stone throne in Takalik Abaj, Guatemala, which was likely (and ironically) repurposed from a carved stone head.

Traces of paint, as well as flat backs, indicate that the heads may once have been colourfully painted and were only intended to be observed from the front and sides. 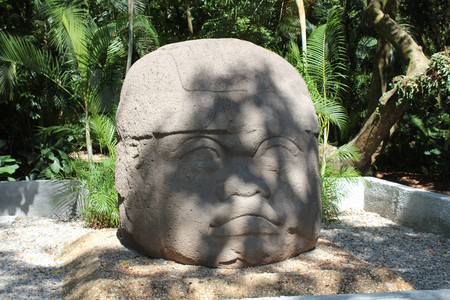 To date, 17 colossal Olmec heads have been discovered in various locations associated with the ancient Olmec civilisations; ten (thought to be the oldest) were found in San Lorenzo, Veracruz, four in La Venta, Tabasco, two in Tres Zapotes, Veracruz and one in La Cobata. The La Cobata head is stylistically very different from the other 16, suggesting it came much later in the Olmec timeline. Having said that, almost all the heads are difficult to accurately date, due to being moved prior to investigation or being found partially uncovered, with the most widely accepted archaeological theory suggesting that they were carved anywhere between 50 and 200 years apart. 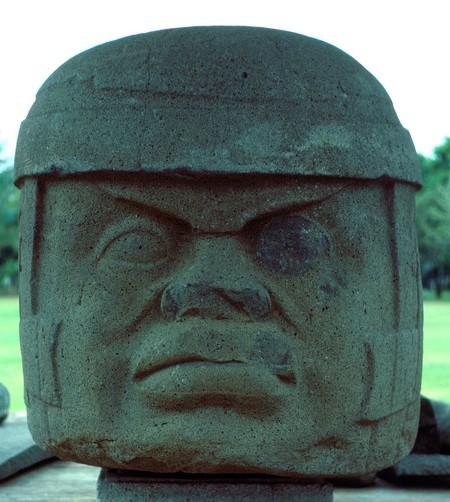 The Mystery of the Olmec Heads

Both the skill level required to craft them and their sheer size – conflicting reports place the heads at anywhere between 4 and 60 tonnes each, and between 5 to 12 feet tall – have been baffling researchers for years.

The question of transportation has also been raised, as the colossal heads were made from volcanic basalt sourced in the Tuxtla Sierra mountains, located some 70km from where the heads were discovered. Historians have proposed the so-called ‘wooden roller theory’, suggesting that they were hoisted atop wooden rollers and slowly inched towards their destination, a theory that neither accounts for the manpower required to move a 40-ton head in the first place nor the fact that much of Olmec territory was marshland. 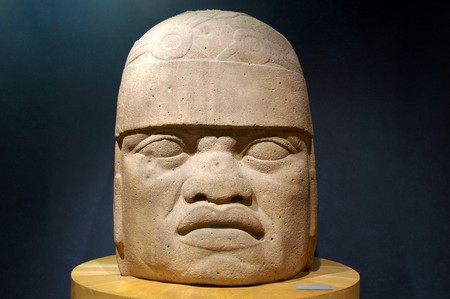 Another key bone of contention surrounding the colossal Olmec heads comes from their distinctive facial features. Some theories suggest that the Olmecs were heavily influenced by early black civilisations, as a result of the supposedly African features the basalt heads possess. However, these claims have been dismissed, as the colossal Olmec heads’ facial features are actually very similar to those of Gulf Coast Mexicans even to this day. Either way, almost everyone agrees they were probably Olmec rulers.

Where can I find the Olmec heads?

Despite replicas existing in diverse locations around the globe, all seventeen of the original Olmec heads are still found in Mexico. San Lorenzo Heads 2 and 6 are at Mexico City’s National Anthropology Museum, and Head 10 is at the San Lorenzo Tenochtitlán Community Museum. The rest of the San Lorenzo heads are at Xalapa’s Anthropology Museum. All four La Venta Olmec heads remain in Villahermosa – three are at Parque-Museo La Venta, and the other is at Tabasco’s History Museum. One of the Tres Zapotes heads, as well as the La Cobata head, are displayed in Tuxtla’s central plaza. The other Tres Zapotes Head is at the Tres Zapotes Community Museum.