The Most Instagrammable Artworks in Mexico City 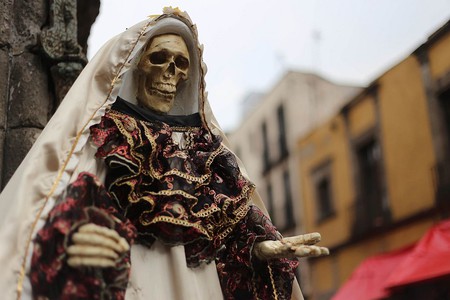 Hand-painted mechanic shop signs, technicolor street art, a rainbow of salsas and street food, a face in every shade of skin—Mexico City is a photographer’s dream, capturing the eyes only slightly before capturing the heart. First-time visitors to Mexico’s capital will want to get it all on record, so here are a few unmissable artworks that should be on your list.

Everyone loves a piece of public art that you can really get into. Literally. Marín’s “Alas de Mexico” sculpture near Mexico City’s Museum of Anthropology lets by-standers become an objet d’art themselves by stepping into these massive golden wings and transforming into a Mexican angel for just a moment. This piece serves as another example of Marín’s deep passion for levity, balance, and freedom of movement, apparent in much of the rest of his work.

Originally meant for other purposes, Santacilla’s monument has become an iconic image of Mexico City. At night it’s lit up like a birthday cake, and during the day is fancifully bordered by a display of water jets that dance and spout to the squeals of joy of Mexico City’s children. The beauty of this structure is undeniable, and more Instagram-worthy shots of the city await you from the balconies of its rounded dome.

Mexico’s long-standing tradition of public murals has been redrawn by Mexico City’s most recent generation of graffiti artists, taggers, and street muralists. Within the last 15 years, the Mexico City government has implemented various programs to encourage street art in every corner of the city. Everywhere you turn the bright, bold colors of street murals will entice you to reach for your camera. Look up! The best pieces are high above you, engulfing the sides of public buildings and hospitals.

In 1921, then Education Secretary José Vasconcelos inaugurated a public murals program in hopes of encouraging education through art for the then highly-illiterate Mexican population. This is the reason that there are so many incredible murals in Mexico City today. Famous muralists Rivera, Orozco, and Siqueiros painted the history and sometimes a projection of the future of Mexico inside buildings across the city, and every day thousands of tourists are still overwhelmed by the beauty they contain.

While some may argue that Frida Kahlo’s Casa Azul—where she lived with Diego Rivera in Mexico City—is just a building, anyone who visits will understand immediately that that doesn’t quite encompass it. The house was transformed into a showcase by Frida, who painted its façade azure blue and blood red, filled its gardens with flowering cacti and covered its walls with paintings, trinkets, and the talisman that inspired her. If art is meant to transport its viewer, visitors to the house cannot deny that to be at the Caza Azul is to be in a world apart.

The last decade has seen a new trend arrive to Mexico City. Suddenly the sides of buildings, public sculptures and food courts are sprouting into verdant, emerald canvases that showcase the city’s greener side. As eco-consciousness grows, residents of Mexico City find themselves longing for a little green in their lives. Inside one of Mexico City’s hottest hotels, on the side of one of its most historic universities, and tucked into some of its hippest hangouts, vertical gardens are everywhere and make a great backdrop for a blossoming photo collection.

One of the most stunning visuals of the Mexico City nighttime cityscape is the Centro Cultural Universitaria in Tlatelolco. Glassford built the installation, which covers each of the building’s four sides, as a homage to the Aztec god Xipe Tótec who shed a layer of his skin to feed mankind, similar to the way a corn cob sheds its seeds to germinate once more. Glassford’s installation has enveloped the building in a new, electric skin that can be seen for miles, but is even more impressive up close.

Locally she’s known as Diana la Cazadora and is most recognized for her fabulously sculpted derriere, which her fans say is a work of art in and of itself. Built in the 1940s to embellish Mexico City’s sweeping Paseo de Reforma, Cazadora was sculpted by Juan Olaguíbel and modeled after a young secretary, 16-year-old Helvia Martínez Verdayes, who swore the artist to secrecy so as not to expose herself (literally) to conservative Mexico City society. Ever-immortal Cazadora hunts for the North Star with her golden bow and inspires those below her to look up and bask in her beauty.

While her devotees would most likely not consider the Santa Muerte an art object, you can’t deny the photogenic quality she possesses, dressed in her finest and scowling down at you from a perch in the Merced neighborhood. Worshiped as Our Lady of the Holy Death, she is here to help you land safely on the other side as you pass from this life to the next. Find her on the street, hidden away in a street corner niche, or tattooed on the backs of her most faithful—every incarnation is slightly different and each is another powerful reminder that she’s keeping an eye on us.