The Life of A Mexico City Diablero 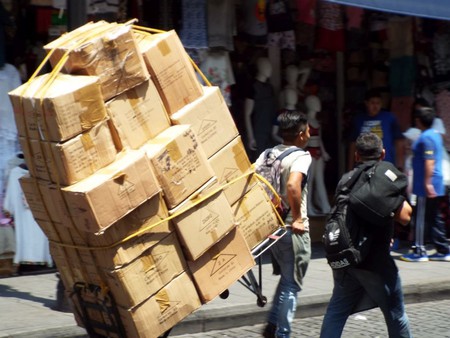 Wander into Mexico City’s Centro Histórico any day of the week and you’ll see them everywhere—men with metal dollies (also called two-wheelers, stack trucks, trolleys, hand carts, sack barrows, and in Mexico, diablos) carrying merchandise through the city streets. We’ve got the inside look into one of Mexico City’s most common professions.

This tradition is an ancient one in Mexico City. In pre-Hispanic Valley of Mexico, there were human dollies for hire, called tameme, that would carry merchandise, or even humans, on their backs for a fee (though some were forced to work for a master). The indigenous people of Mexico used what is called a mecapal, a type of tall basket with a leather strap that was worn around the forehead to carry whatever needed to be transported. You can still see versions of this basket-carrying system in some of Mexico’s rural, indigenous communities. 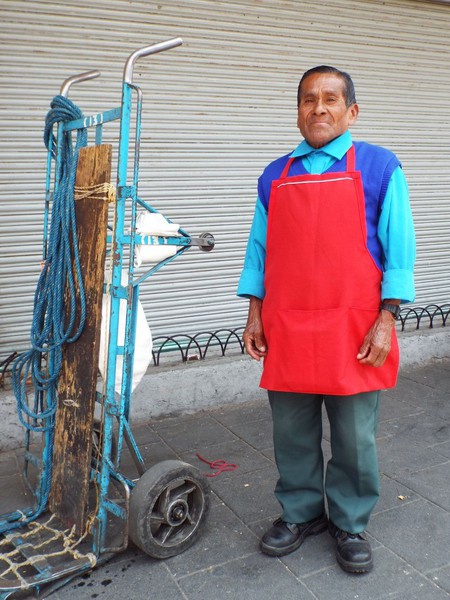 Diableros can carry up to 600 or 700 kilos (1,300 to 1,500 pounds) and while their tools have improved slightly—the invention of the dolly allows them to stack things more efficiently—the general idea behind their work remains the same: they are men for hire that will carry whatever you need from the market to your home, shop, or business.

Don Pablo has been a diablero for over 40 years. He’s now close to 70 and still working in the Merced neighborhood of Mexico’s Centro Histórico. With a slight semblance to Benito Juárez and the stature of a true Oaxacan, Don Pablo’s diablo towers an inch or two above his head as he stands proudly next to it.

Don Pablo gets up around 4 am in Tlalnepantla de Baz, a neighborhood in the northwest of Mexico City, to travel for an hour into the heart of downtown and then work until 4 or 5 pm. Depending on the day, it can take him over two hours to get back home. Though he has a small build, he insists he’s still capable of doing the job.

“I’m a grandpa, an old man, a senior citizen! People say to me ‘Why don’t you go down and get your senior citizen card, get help from the government?’ But I can still work! I’m still strong! I feel like I’m still 30!” 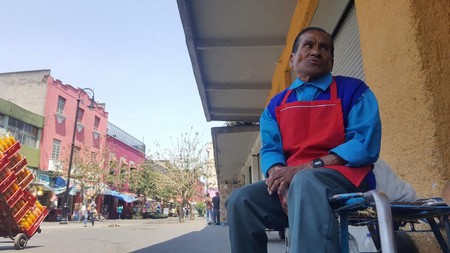 To work as a diablero is a bit like working as a taxi driver, though a bit more informal and slightly more precarious. Most diableros rent their dolly or diablo for 10 to 15 pesos (less than $1 USD) a day. Diablos are kept in central warehouses until a diablero comes early in the morning to grab one and head out to the streets. They’ll hang around the markets and streets where the most commerce is taking place and will be hired on the spot by folks who’ve bought more than they can carry. Diableros then transport their client’s merchandise to its destination after which they get paid 15 to 20 pesos for the completed delivery (approximately $1 USD). 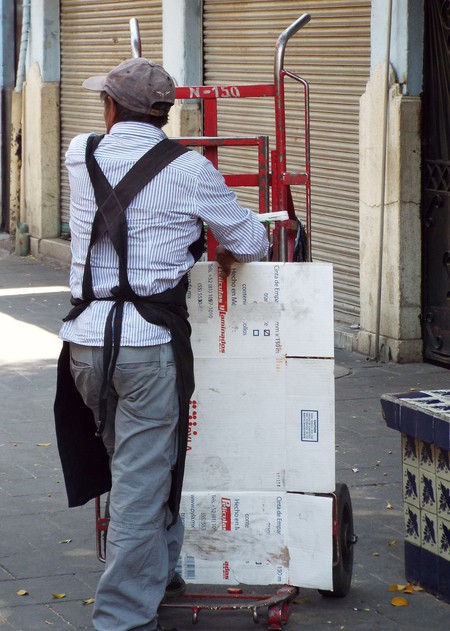 “People just say, ‘Hey, jefe, take a little trip for me’ and I take their things and they pay me 20 pesos. I make enough to eat and drink every day—200 pesos a day is enough to pay my rent, pay my bills. God gives me everything I need,” says Don Pablo, who repeats his thanks to God throughout the conversation.

The life of a diablero is all about the hustle. These workers typically spend 10 to 12 hours on their feet, carrying loads of several hundred pounds that even with the help of a metal dolly are taxing on their backs and arms. Mexico City’s diableros are mostly migrants—from places like Oaxaca, Puebla, and Michoacán—that came to find work in the city, though many return to their farms for the harvest each fall. Most have had no official schooling and some speak Spanish as their second language, their first being an indgenous dialect. This work offers them a chance to make a living and the freedom to be their own boss.

The diableros are a proud bunch, proud of the work they do and their ability to support their families. Older diableros, like Don Pablo, are also proud that they are still able to work after so many years. Don Pablo has five children and 14 grandchildren.

“None of my children have to take care of me,” he says with a smile. “I work for myself.”