The Essential Guide To The Work Of Gael García Bernal 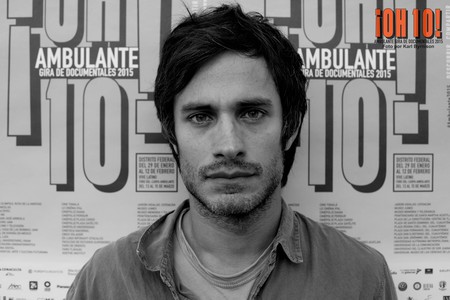 Gael García Bernal is a force to be reckoned with; internationally recognised as a successful and critically acclaimed actor, producer and director, many people forget about his equally impressive ventures, the Ambulante Film Festival and Canana Films production company, both of which he co-founded alongside Diego Luna. After humble beginnings as a budding telenovela heartthrob in his native Mexico, he’s blossomed into someone Time magazine considers to be one of the most influential people in the world. Here’s your essential guide to the work of Gael García Bernal.

García Bernal got his foot in the door of the film and television industry in 1989, playing the role of Peluche in Teresa, before moving on to the role of Daniel García Medina in El abuelo y yo in his pre-teen years. However, in the world of small screen roles, he is perhaps best known on a more international scale for his critically acclaimed turn as orchestra conductor Rodrigo de Souza in the Amazon web series, Mozart in the Jungle (premiered in 2014). For this role, he was awarded his first Golden Globe and reports indicate he’ll be directing season three’s finale.

When it comes to Gael García Bernal and silver screen roles, there are a handful of key movies that immediately spring to mind. The first is his breakout role as Octavio in Amores Perros (2000), which he starred in aged just 22. Not only a classic of Mexican cinema in general, it’s a brutal depiction of the seedy underbelly of Mexico City life, as well as marking one of García Bernal’s most popular and critically acclaimed roles to date.

The second key film in García Bernal’s career is the 2001 comedy coming-of-age tale Y tu mama también. In this film, he starred with real life best friend and frequent professional collaborator, Diego Luna, with both actors receiving positive feedback for their depictions of wayward friends Julio and Tenoch, respectively.

The third most iconic Gael García Bernal performance was his excellent turn (not for the first time, though) as the legendary Argentinian revolutionary, Ernesto ‘Che’ Guevara. The Motorcycle Diaries (2004) cemented his reputation as one of Mexico’s brightest acting talents and gained him his first BAFTA nod.

He finally broke into the Hollywood mainstream when he once again collaborated with famed director Alejandro G. Iñárritu for the third instalment of the trilogy which began with Amores Perros. Babel (2006) saw García Bernal star as Santiago alongside big hitters such as Brad Pitt and Cate Blanchett, yet also hold his own as a legitimate actor. No mean feat.

The final film worth a mention of its own is the comedy Spanish-language flick from 2008, Rudo y Cursi. In this Carlos Cuarón directed picture, we see García Bernal reunite once again with Diego Luna as a talented footballer with musical aspirations. It’s worth a watch for the comical music video that García Bernal’s character Tato (El Cursi) stars in midway through the film.

Most recently, García Bernal has starred in the Carlos Cuarón produced Desierto (2015), 2014’s Rosewater (which was a directorial debut for Jon Stewart) and finally as the eponymous Pablo Neruda in Neruda (2016). Other movies from his back catalogue worthy of mention include El Crimen del Padre Amaro (2002), Even The Rain (2010), The Science of Sleep (2006) and Bad Education (2004), in which he effortlessly portrayed a cross-dressing teacher during Spain’s repressive Franco dictatorship.

However, Gael García Bernal is just as talented behind the camera as he is in front of it. In 2007, he took up the reins as both producer and director (the latter for the first time) with the film Déficit, in which he also had a starring role. He followed that a while later in 2009 with the magnificent but tragic film Sin nombre, which follows the fictional story of Central American immigrants trying to make their way up through Mexico and to the US border.

His interest in the struggles of undocumented migrants didn’t end in 2009; just a year later he teamed up with Amnesty International to produce a series of four short documentaries about the real life immigrants attempting to make much the same journey as the one detailed in Sin nombre. Los Invisibles (2010) was co-directed and narrated by García Bernal.

García Bernal’s interest in documentaries didn’t end with producing and directing them, however; in 2005, he and Diego Luna set up the Ambulante Film Festival. This documentary oriented film fest tours across Mexico and parts of the US early each year, showing off low-budget documentaries produced by local talents and often in indigenous languages, as well as eschewing typical screening locations.

2005 was a busy year for the pair, as Luna and García Bernal, alongside Pablo Cruz, also co-founded their own film production company, Canana Films – in and amongst their seemingly light schedules of acting, directing and producing, of course. To date, they’ve released films such as the indie Banksy documentary Exit Through The Gift Shop (2010), No (2012), the Oscar nominated film set during Chilean dictator Augusto Pinochet’s regime and starring García Bernal, and the comedy horror flick Juan de los muertos (2011).