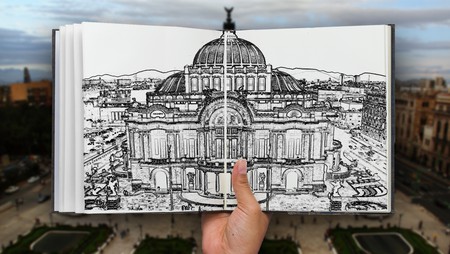 As part of our literary city guide series, we’ve mapped out the literary landmarks, bookstores, writers and books of contemporary Mexico City.*

If pre-war Cuernava, a city located just an hour south of the capital, will for English readers always be associated with the alcoholic masterpiece that is Under the Volcano—“drink all morning, they said to him, drink all day. This is life!”—Mexico City is one for Mexican literature. It is in the influence of proto-feminist philosopher Juana Inés de la Cruz, and the writings of the likes of Octavio Paz and Roberto Bolaño, that the city’s literature thrives—even though as disparate foreign figures as William Burroughs and Leon Trotsky, too, once lived there. Here’s our introduction to it. 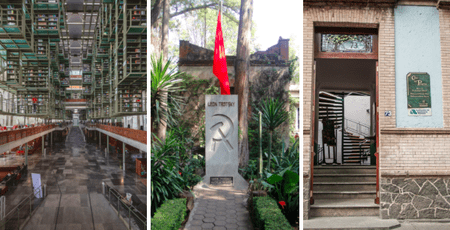 Claustro de Sor Juana
The seventeenth-century proto-feminist poet Sor Juana Inés de la Cruz called Mexico City her home. The former convent where she spent the second half of her life is now open to the public. Rechristened as the Claustro de Sor Juana, this building now houses a gallery dedicated to her life and work and is used as an institutional space to promote literacy.

Casa del Poeta
The former residence of Mexican poet Ramón López Velarde has now been turned into a museum and institution celebrating both the poet and his art. The Casa also includes the personal libraries of writer Salvador Novo and poet Efrain Huerta, who invented a form of verse he dubbed “Poeminimos” (poeminimums).

Museo Casa de Leon Trotsky
The house where the famous Marxist revolutionary and political theorist lived and was killed is mere blocks away from Frieda Kahlo house’s. Here you can find the archives of Trotsky’s writing, several photos, his house and room, still pocked by the bullet holes of his assassins, and the grave of the man himself.

Roberto Bolaño, William Burroughs, and Octavio Paz HomesWhile not an official designated landmark, the address of the famous Chilean expat’s former Mexico City is a bit of a trek in the far north of the city. A bit closer in lies William Burroughs former residence where he accidentally killed his wife. Not far is the Fonoteca Nacional where Octavio Paz lived his last years after his previous residency burnt down. 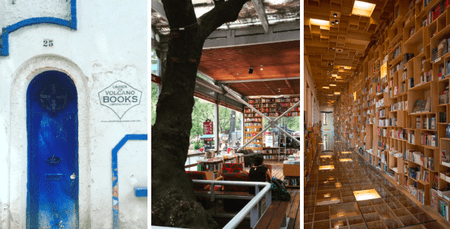 Librería Educal Alejandro Rossi
The reasons for recommending this bookstore are threefold: firstly, its architecture is nothing short of spectacular, secondly, the books sold there are fantastic and the layout is unique but easy to navigate, and finally, it’s located within the jaw dropping Biblioteca Vasconcelos.

Centro Cultural Elena Garro
Modern, sleek and architecturally stunning are the best ways to describe this bookstore. With the illusion of an open plan layout, the show-stopping area is undoubtedly the children’s section; books are suspended on wires from the ceiling like something straight out of a Harry Potter film.

Librería Rosario Castellanos
This bookstore finds its home in one of Condesa’s most architecturally interesting buildings. The Centro Cultural Bella Época is an art deco masterpiece on the outside, but inside you’ll find a modern and futuristic bookstore with a wide selection of both Spanish and foreign language books.

Librería Porrúa Chapultepec
A bookstore surrounded by a park and with a living tree growing through it might sound like something from a fairy tale, but it’s the description of this bucolic bookstore, one of many of the Porrúa chain, this store earns a spot on this list for sheer beauty—even the books are shelved according to a compelling aesthetic.

Under The Volcano Books
It seems fitting that this English-language expat bookstore is named after Malcolm Lowry’s famous expat book set in Cuernavaca, an hour south of Mexico City. Titles can be both bought and sold (they even publish a most-requested list), but take note that the store is cash only. 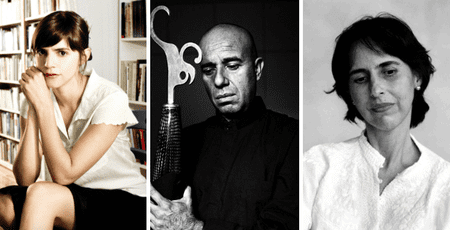 Valeria Luiselli
Luiselli is quickly becoming on of the biggest names in Mexican literature and is making a equally seismic rumble in the New York literary scene. Her playful, mesmeric novels have pushed the boundaries of distortion between the real and the imagined. Works such as Faces In The Crowd (2012) and The Story Of My Teeth (2015), which won the Los Angeles Times Prize for Best Fiction are told in a voice of compelling originality. Her collection of essays, Sidewalks (2013), casts a unique and personal outlook on contemporary urbanity. Luiselli is married to writer Alvaro Enrigue.

Yuri Herrera
Born in the suburbs outside of Mexico City, Yuri Herrera studied in the city and pursued graduate work in El Paso. His first novel Trabajos del reino (“Works of the King”) won the prestigious Premio Binacional de Novela Frontera de Palabras / Border of Words for best Mexican-American border novel. Signs Preceding the End of the World, was his first to be translated into English was included in the The Guardian‘s Best Fiction Books of 2015. That same year he discussed the idea of border fiction with the long-running magazine American magazine, The Nation.

Mario Bellatin
One of Mexico’s leading writers of experimental fiction, Bellatin is known for his impish games with language and structure. As an openly gay writer, his lexical wordplay and innuendos send his readers into a false sense of security, yet it is this carefully constructed surrealism that has brought him much acclaim. Having first self-published in his parents’ native Peru, works such as the heartbreaking Beauty Salon, and the challenging, transgressive, Jacob The Mutant, have challenged Mexico’s established literary order, as do the artful prosthetics on his right arm.

Verónica Gerber Bicecci
Included in the Mexico20 anthology (see below) Bicecci is a rising star in both the literary and art scenes of Mexico City, with the two facets often coming together in her work. Her first published book, Moving Out, is a collection of personal essays about artists reminiscent of W.G. Sebald’s The Emigrants. In 2015 Bicecci published the novel Empty Set, about a woman and her invalid grandmother who can only communicate through drawing.In November 2013, she received the Aura Estrada Literary Prize.

Coral Bracho
One of Mexico City’s great contemporary poets, Bracho began publishing at a young age, publishing her first collection Peces de piel fugaz (Fish of Fleeting Skin) in 1977. She won the Aguacalientes National Poetry Prize in 1981 and a Guggenheim fellowship in 2000. In 2007 she was awarded the award “Programa de Aliento a la Obra Literaria de la Fundación para las Letras Mexicanas” in recognition of her work. The following year, a selection of her work Firefly Under the Tongue, appeared in an English translation by fellow poet Forrest Gander. 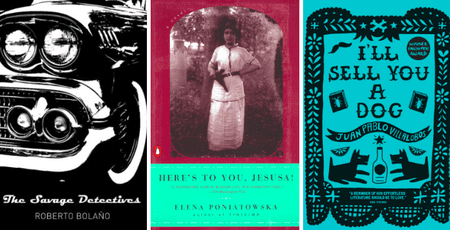 Courtesies from left to right: Penguin UK, Penguin US, and Other Stories

The Savage Detectives
Roberto Bolaño’s award-winning epic is arguably the great Mexico City novel. Separated into three parts, the first and third tell the story of two young poets living in Mexico City in the 1970s searching for the whereabouts of a much older poet while on the run from a crime. The larger second part is told in over 40 different interview-like narratives that span over a twenty-year period and spanning the globe. The Savage Detectives won major literary awards in both Mexico and in the US (for its translation), and was the work that made Bolaño a canonical writer of world literature.

Umami
The debut by Mexican novelist Laia Jufresa tells of the residents of a neighborhood Mexico City mews. Umami is structured to reveal the characters’ complexities, beginning with four chapters told from different points of view, each going back one year until the end of the section and written to utilize many linguistic and colloquial terms. This constant shifting of perspective and language not only allows Jufresa’s characters to be seen from many angles, but also aids in the unveiling of several mysteries, especially considered in one mother’s loss of her child.

Here’s to You, Jesusa!
Elena Poniatowska fictionalized biography of a female revolutionary is a must for anyone curious about early 20th-century Mexico City. Jesusa is a Oaxaca native who leaves behind her job and husband to join Pancho Villa’s band of fighters during the Mexican Revolution. She ends up in Mexico City where she becomes a notable dissident, constantly fighting the authorities for the sake of the people. To create Jesusa, Poniatowksa interviewed Josefina Bórquez, a real life female Mexican revolutionaries who made the writer walk her chickens upon each visit in exchange for the info.

I’ll Sell You a Dog
In this romping account of a former Mexico City taco seller, Juan Pablo Villalobos offers a hilarious satire that chides class and properness. Though the protagonist has become famous for his “Gringo Dogs”, he laments dashing his true ambition: to be a real bonafide artist. Now living in a retirement home, the narrator recalls his rivalry with Diego Rivera, his antagonizing of American missionaries, his popularity as a taco seller, and being haunted by the ghost of another long forgotten artist. Villalobos has developed a reputation for his comic acerbity, and I’ll Sell You a Dog set in Mexico City, may also represent the character of the city at its most humorous.

Among Strange Victims
The English debut by the young and talented Daniel Saldaña Paris, Among Strange Victims is the definitive millennial existentialist novel of Mexico City. The protagonist Rodrigo is a bit of a loner who spends his time in a lot next to his apartment when he’s not wandering aimlessly around the city. His routine of ennui is interrupted by various characters—a lover, and a philosopher among them—who take him from the streets of Mexico City back to the beach town of his birth and speak of a way to travel back in time. A recommended mediation on being in the present.

Mexico20: An anthology of new Mexican writing published in 2015.

* This guide pulls from preexisting listicles curated by Lauren Cocking and Reece Choules for Culture Trip. As these previous lists may include items not shown here, links to these pieces have been hyperlinked in section titles.