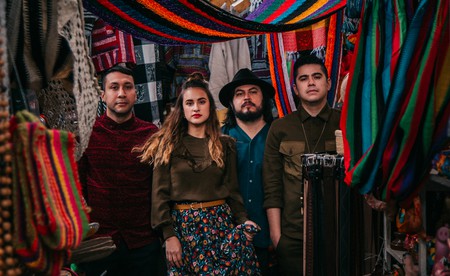 It seems the longer U.S. President Donald Trump’s proposed “big, beautiful wall” continues to sit in limbo, the more its impracticalities rise, its support dwindles, and its irrelevance is revealed—Trump’s anti-Mexico rhetoric is already costing the U.S. billions in tourism.

While plenty of American musicians have protested Trump’s actions through song, it is equally important that we seek out a balance of culture through native Mexican sounds. Few groups serve as a better bridge than the indie pop quartet The Chamanas, whose members originate from both El Paso, Texas and Juárez, Mexico.

The band—comprised of members Paulina Reza (vocals), Alejandro Bustillos (drums), Manuel Calderon (bass), and Hector Carreon (guitar)—began after Calderon and Carreon met while working at Sonic Ranch, the world’s largest residential recording studio complex, located approximately 20 miles outside of El Paso; artists such as Animal Collective, Yeah Yeah Yeahs, At the Drive-In, and Beach House have recorded there. Describing their style as “música fronteriza“, aka “border music,” The Chamanas blend influences from both nations to create a sound that could only come from this region.

The band gained popularity after they released a reinterpreted cover of Portugal. The Man’s hit single “Purple Yellow Red and Blue”, serving as the opening track on their debut album, Once Once. The album’s positive reception helped the band to receive a nomination for Best New Artist at the 2016 Latin Grammys. Even though they didn’t take the home the trophy, Calderon explains that by just being nominated, “people take us a little more seriously now.”

Now gearing up for the release of their sophomore LP, titled NEA, the band released the first track, “El Farol.” The song’s accompanying video (watch it below) features clips of the band while they were in Bogotá, Colombia for a performance, and was shot entirely on an iPhone 7.

Having been up the entire night to finish the final tracks on the record before driving from Austin to San Antonio, Calderon jumped on the phone with us to discuss what unifies and separates El Paso and Juárez, why the band chooses to sing in Spanish, and what Trump’s America means for their music.

Culture Trip: Describe the music scenes of El Paso and Juárez. Are they two separate entities, or is there a lot of crossover in terms of sound?

Manuel Calderon: The border is kind of waking up again, especially Juárez. It was nonexistent. There were no shows and no one was making any music because of the violence in the city four or five years ago. People are starting to go out again, people are opening up businesses and restaurants. There’s some really good acts coming out of El Paso, like Khalid. He’s making a lot of noise right now. And Cigarettes After Sex, they’re out in Europe touring and doing some pretty awesome festivals.

CT: Describe the differences and similarities of El Paso and Juárez as cities.

MC: In the people, they are very similar. El Paso is basically just like another Mexican town; the Mexican population there is probably over 70 percent, I would say. The culture and the food, it’s all very similar, but the cities are also very different, and you can see the immediate contrast when you switch over from one city to the other. When you go from El Paso to Juárez, you can see how unorganized things are in Juárez. In El Paso there are beautiful roads, bridges, and buildings, and you have a nice downtown skyline. In Juárez, you don’t see any of that. You know, what’s been happening to Latin America in general, there’s a lot of corruption and the people in charge don’t invest in their cities. Even though things are kind of chill now, you can still feel a lot of the tension. There’s still some of the cartel fights and violence; all of a sudden you’ll hear some gun fights.

CT: You’ve described your sound as “border music”. What exactly does that mean?

MC: The spirit of being on a border is that there is no border, you know? There are no limitations to whatever you do. In our case, when we started the project, we never pictured it sounding like anything. We just started jamming out. Hector and I have very different influences. He has more of a pop influence and I have more of a weird, indie influence. You know, and we like artists like Bronco or José José, as well as groups like Pink Floyd, and so it all kind of merged together.

CT: Why did you choose to sing in Spanish, considering that it might make it more difficult to break ground in the U.S. market?

MC: In the beginning, we had tried to do some stuff in English, but Spanish is such an intense language, which I think has to do with the Latin culture. The way you say “I love you” in English isn’t the same as you say it in Spanish. It has a totally different meaning. I feel like our music has to be in Spanish for a lot of those reasons. It just didn’t feel right in English. We opened up some shows for Beach House last year—two shows in Texas, one in D.C.—and we were really surprised by how the crowd reacted to our music. You could tell that people really enjoyed it even though it was in Spanish.

Nowadays, with Trump on immigration, it’s not just English speaking in the U.S. There are so many languages, whether it’s Spanish, Korean, or Mandarin. We’re trying to make a statement, too. That we’re U.S. citizens and we like to speak in Spanish and sing in Spanish. I think that Spanish is a beautiful language, and that it’s very romantic.

[As blogger Eric M. Ruiz explains in his recent post “The Cultural Impact of ‘Danza Kuduro’,” while the most popular Latin songs in the United States were sung in English, the charts now show a shift towards their native language.]

CT: You have another Portugal. The Man collaboration coming on NEA, which is sure to be a fan favorite. How did you end up collaborating with the band the first time around?

MC: I worked on a couple projects with them at Sonic Ranch. I became really good friends with the band, especially John Gourley, the singer. One time they stopped by the studio when The Chamanas were just starting, and they had the idea to have bands from different countries to create versions of their songs. I pitched a couple bands from Mexico, but told them about my band, and they immediately said “let’s do it”. The original idea was just to do a different instrumental version than them and sing it in Spanish.

CT: Tell us a bit about your new song “El Farol”.

MC: “El Farol” in English means “the lighthouse”. Specifically, the lyrics talk about when you’re opening up a new relationship with someone—not necessarily a romantic relationship, just with anyone in general—sometimes it’s hard to trust, especially when you’ve been betrayed or hurt before. Your intuition is like a lighthouse; it shines when there’s a lack of light. In terms of production, we tried to match it to “Purple Yellow Red and Blue,” just to keep that ball rolling with that style.

What can we expect on NEA?

It keeps a lot of what made Once Once—a lot of color and diversity—but with some new elements added in. Besides the Portugal. The Man track, we have a cover of a track everyone will recognize right away, and a collaboration with David Sitek from TV on the Radio.

CT: Considering everything that is going on with Trump and “the Wall”, do you feel the need to be political in your music?

MC: I think you’re forced to be political, even if you want to stay away from it, especially when you have this following that looks up to you and listens to what you say. I think the best political statement is to show a good example through actions. We’re showing that we’re both U.S. and Mexican citizens and we function, we try to write good music and stay away from trouble. We aren’t coming to take anything from [the U.S.], it’s the other way around. Trump may have won, and while different races might be on edge with others, we have to do our best to stay united and do our best not to take things so personal and opt for love instead.

In the lead-up to The Chamanas’ sophomore studio album, the band has put together a playlist of the artists and songs that influenced their writing process. Listen below: