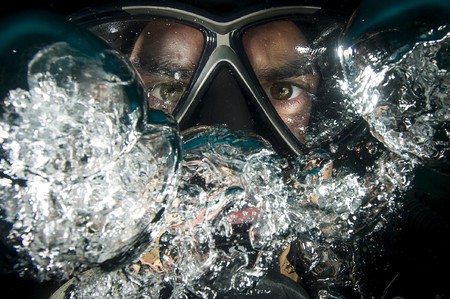 Unlike other scuba diving destinations, Playa del Carmen offers not only marine beauty but also the history of an ancient civilization. This stunning place on the Mayan Riviera has the second largest coral reef in the world, boasting mystical paths in the caverns of its cenotes, exotic marine life in its reefs and the opportunity to swim in its long underground rivers. Check out our list of the best spots in Playa del Carmen to discover the Mayan underworld.

Named Dos Ojos – which means Two Eyes – as it has two sinkholes very close to each other which, when viewed from above, look like two beautiful turquoise eyes. As they’re connected by a system of underground flooded caverns, it is considered a single cenote. It belongs to a system of underground rivers that are up to 57 km long and 24 meters deep (the third longest underground river in the world). The first eye is the bigger of the two, reaching 13 meters in depth. Remains of prehistoric animals and cave paintings were discovered in this sinkhole. How to get there? Take a bus from Playa del Carmen or go to Dos Ojos Dive Shop and ask about their services. 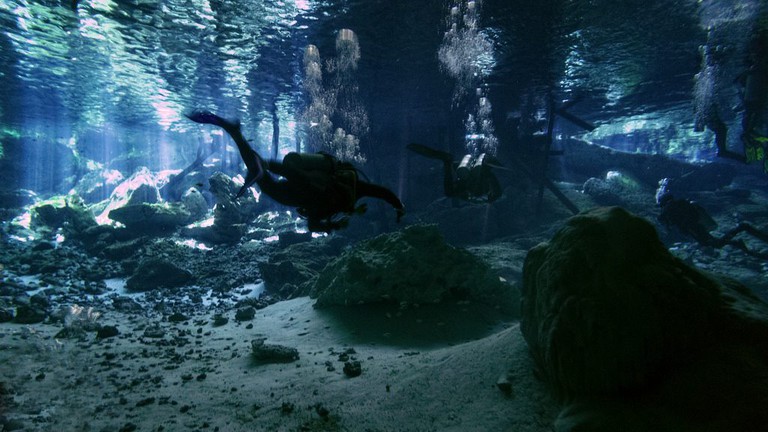 Another unusual option for diving, Mama Viña is an old shrimp ship intentionally sunk in 1995. Eventually becoming an artificial reef, it is now one of the best sites for scuba diving on the Riviera Maya. Due to its strong currents, it’s only advisable for experienced divers, suitable for multi-level and deep diving. Descend 18-30 meters (60-90 ft) deep and explore the interior of the ship and admire the corals and marine life.

Arrecife Tortugas means Turtles Reef and, as the name indicates, the object of diving this reef is to watch marine turtles. Located between Playa del Carmen and Puerto Aventuras, it takes just 30 minutes to reach by boat. Due to the currents, this is one of the most exciting drift dives at 26 meters deep. Be captivated by an amazing number of Hawksbill turtles, green moray eels, toad fishes and a wide range of beautiful fish. 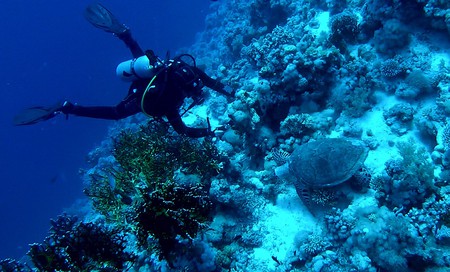 Located 20 minutes from Playa del Carmen, this cenote is ideal for intermediate level divers. What makes Chac Mool special is the variety of things to explore. There are two entrances, a large one called “Downstream” and a small side entrance called “Little Brother.” Further ahead, there are two caverns in which the sunshine lets you enjoy the jungle view from under the water. Next, there’s a dome-shaped area composed of stalactites. An “airbag” in the same area allows divers to explore stunning fossils, stalactites and roots of giant trees. The maximum depth is 13 meters.

Barracuda is located 20 minutes south of Playa del Carmen. Its slopes make it a good place for beginners; the first is only 12 meters deep and has excellent visibility. One hour is enough time to dive around the hawksbill turtles and jellyfish and see the diverse corals at the bottom. In the clear crystal waters you can admire colorful tropical fish, crabs, octopuses, lobsters and moray eels. 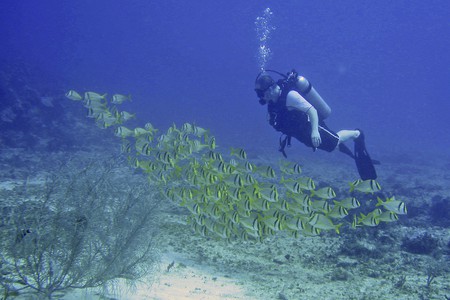 Pared Verde, translated as Green Wall, is a beautiful undersea landscape, covered by vibrant sea fans and sponges, that create a colorful undersea landscape. Swim among marine turtles, barracudas, crossbows, ayas whip and exotic fauna on this dazzling reef. If you’re not too adventurous, you may prefer to dive during the Mexican summer or spring, because during Mexican winter (from December until the end of February) it’s common to see sharks. An average dive takes approximately 50 minutes and has a medium difficulty and intermediate current.

This amazing site is reserved for certified divers or those who are about to qualify. The sea current can be strong, so it can be a challenge if you’re not sufficiently experienced. Its maximum depth is 15 meters, and part of the thrill is swimming in the caverns to see the Green moray eels, speckled moray eels, crabs and sea spiders. If you like marine photography, this is the place to capture colorful corals, sponges and the abundant marine fauna.