The Best Places To Try Edible Insects In Mexico City

Tostada de escamole, Pujol | © Nicholas Lundgaard/Flickr
Many visitors to Mexico are aware that they should probably, at some point, give some crunchy, salty, spicy fried grasshoppers a try – and they’re right! But Mexico’s edible insect scene extends much wider than the humble chapulin. Here’s our rundown on the best spots at which to try all manner of edible insects in Mexico City, whether you’re more of a worm guy or a spider gal.

Restaurant with Rooms, Mexican, $$$
Eggs and tamales at El Cardenal | © LWYang/Flickr
El Cardenal, which has a few branches across Mexico City, is a great option for edible-insect newbies who are looking to step out of their comfort zone. They’re particularly well known for serving the so-called delicacy of escamoles,otherwise known as ant eggs. Widely referred to as Mexican caviar, the thought of eating them might make you queasy, but when served up with fresh tortillas, they’re apparently very palatable. And at least they don’t have legs.
More Info
Open In Google Maps
23 Calle de la Palma , Centro Histórico, Mexico City , 06000 , Mexico
+525555213080
View menu
Visit website
Visit Facebook page
Send an Email
Give us feedback

Restaurant, Mexican, $$$
This is the unrivaled place to be for insect eating fans, or those who just want to try out a bit of something new. La Cocina de San Juan, situated right next to the market of the same name (Mercado de San Juan), serves up a number of classics, including the standard maguey worms, escamolesand flying ants. However, the real draw of this spot is their weirder and more wonderful selection of dishes, such as tarantulas and scorpions. Make the experience even more Mexican and eat them in a tortilla, topped with grasshopper sauce.
More Info
Open In Google Maps
Local 342, 21 2ᵃ Calle de Ernesto Pugibet, Colonia Centro, Centro Ciudad de México, Ciudad de México, 6000, Mexico
+525555125237
View menu
Visit website
Visit Facebook page
Send an Email
Give us feedback

Restaurant, Mexican, Vegetarian, $$$
Mezcal | © Aaron Jacobs/Flickr
Located in Coyoacán, Corazón de Maguey is a restaurant that specializes in traditional Mexican cuisine, such as tlayudas and mole, but they also feature some edible insects on their menu too. We recommend their grasshopper guacamole to ease yourself into the insect eating world. Aside from being the most popular insect to taste test, they’re also pretty delicious and nutritious.
More Info
Open In Google Maps
9A Parque Centenario, Coyoacán Ciudad de México, Ciudad de México, 4000, Mexico
+525555547555
View menu
Visit website
Visit Facebook page
Send an Email
Give us feedback

Restaurant, Mexican, $$$
Another Mexico City classic for those looking to try out some fried critters is Restaurante Don Chon, in the center of the city. As with many of the spots on this guide, they also serve up escamoles,served alongside spicy sauces and cactus, as well as chapulines(grasshoppers) with guacamole. While these dishes are often seasonal, you’ll probably be able to find at least one of them on the menu whenever you drop by.
More Info
Open In Google Maps
160 Calle Regina, Centro Histórico de la Ciudad de México, Centro Cuauhtemoc, Ciudad de México, 6090, Mexico
+525555420873
View menu
Visit website
Visit Facebook page
Send an Email
Give us feedback

Limosneros makes for a great Mexico City option if you want to try out edible insects. Here they serve up dishes bathed in sauces that feature the earthy, salty flavor palate of ground grasshoppers, plus the classic escamoles or even cocopaches (a type of beetle) served with cheese and squash blossom. Equally, if you don’t want to dive in headfirst, why not just have a simple glass of mezcal served with a worm or grasshopper salt accompaniment.

Restaurant, Mexican, $$$
Los Danzantes Mezcal │ | © Krista / flickr
Another one of Mexico City’s restaurants themed around pre-Hispanic food, Los Danzantes serve up a selection of exquisite dishes that incorporate grasshoppers. One comes with cheese, guacamole and salsa and the other is served atop a crunchy tostada, accompanied by goat’s or sheep’s cheese. Again, this is a great way to ease yourself into edible insects, in one of Mexico City’s top restaurants. Plus, it’s situated in the lovely neighborhood of Coyoacán.
More Info
Open In Google Maps
12 Parque Centenario , Coyoacán, Mexico City, 04000 , Mexico
+525555541213
View menu
Visit website
Visit Facebook page
Send an Email
Give us feedback

What better place to chow down on some insects than in the historic and beautiful Condesa neighborhood? At the rather appropriately named Azul Condesa, you can do just that. Although this is definitely one of the more upmarket places at which you can try out some culinary specialties, it’s reflected in the beautiful execution of the dishes; take, for example, the grasshopper guacamole which is topped with diced, rather than whole, grasshoppers. If you’re a little on the fence about eating something with eyes, this might be the place to go. 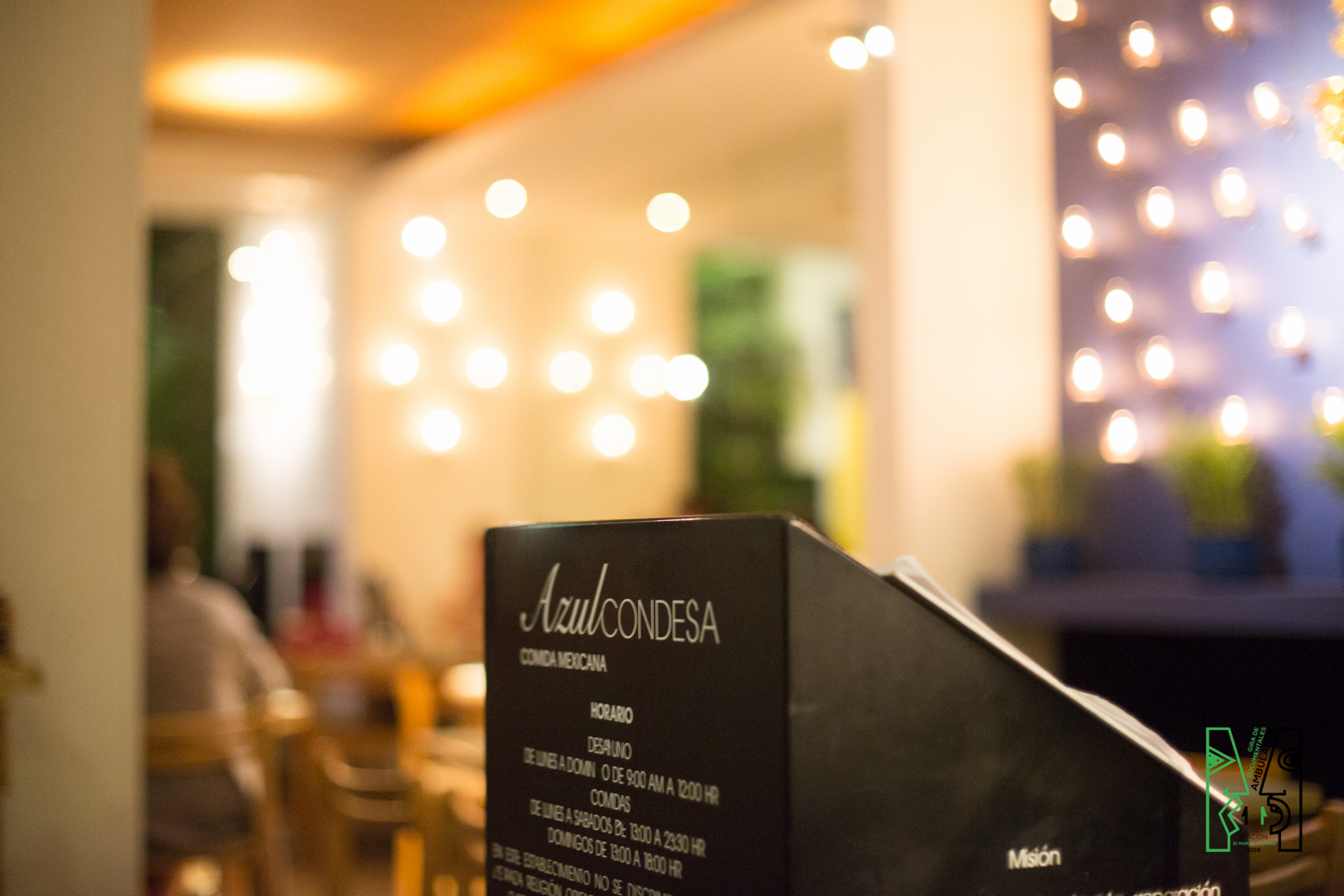