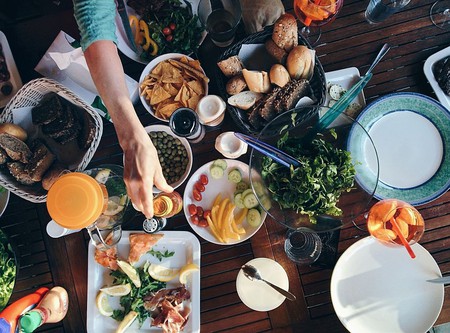 A feast of flavors and smells | © foodiesfeed.com

The blending of cultures has always mapped out the culinary history of human beings. Without Mexico, Italy wouldn’t have its beloved tomatoes; without cinnamon from Asia, arroz con leche wouldn’t have the same zing; and let’s not even imagine a world without the wine grapes, first cultivated in Georgia around 8,000 years ago. The following restaurants in Mexico City mix and match culinary traditions to give you a taste of the global and a flavor of the local. 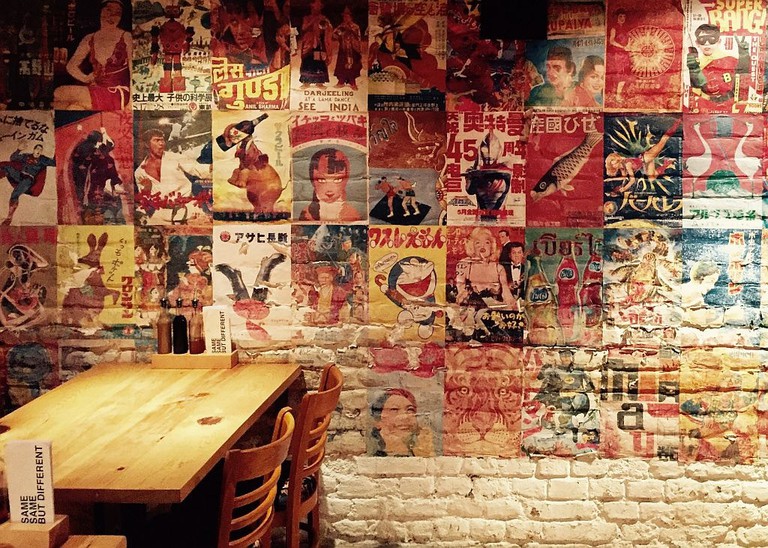 Sesame Restaurant | Courtesy of the restaurant
Sesame calls itself Pan Asian cuisine, and just like its sister restaurant, Paprika Cocina de Especias, Sesame’s goal is to offer you a taste of the entire continent. From Peking duck to pad thai to samosas, everything is carefully created, artfully plated and, above all, delicious. The space in Colonia Roma is welcoming and cozy and has a great ambiance for a night out with friends.
Open In Google Maps
183 Colima, Roma Norte Ciudad de México, Ciudad de México, 6700, Mexico
+525552077471
Visit Website
Give us feedback 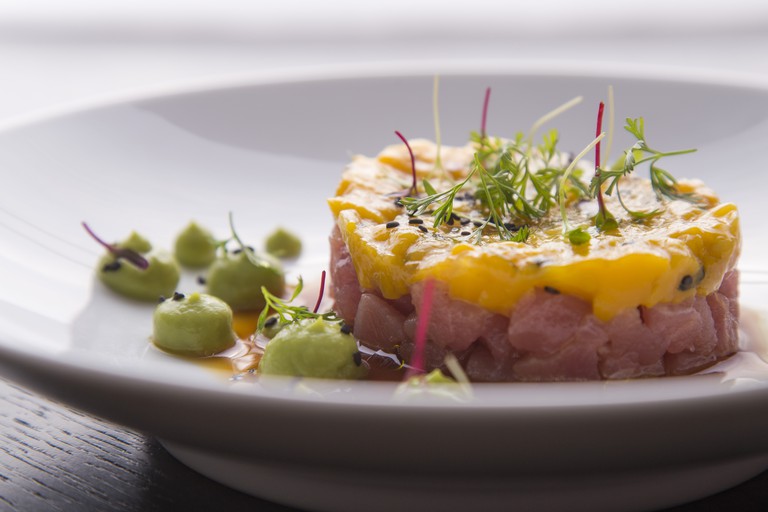 As the name suggests, Eloise is a chic, cozy, bistro-style restaurant in Mexico City’s southern San Angel neighborhood. While most of their dishes are versions of French classics, like French onion soup or short ribs a la bourguignon, the chef mixes in Mexican spices and endemic fruits and vegetables. The foie gras creme brûlée comes with a maracuya vinaigrette, and the tuna tartar is chopped up with cilantro, mango, and fried tortilla slivers. This is a place where you can get your French fix and a taste of Mexico at the same time. 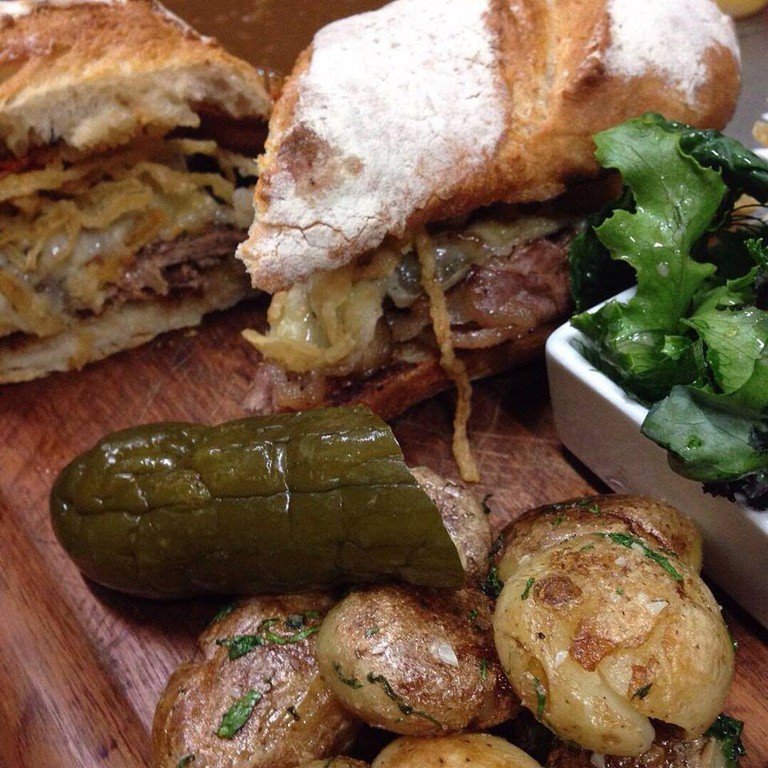 Another French–Mexican fusion, Mexsi Bocu mixes Mexican huazontles with goat’s cheese and roasted tomatoes and sprinkles a bit of cotija cheese here and there to give their French-inspired dishes an added plus. The epazote raviolis are particularly divine, along with the cilantro couscous and salmon with a Mexicana béarnaise sauce. Their location, on the border between Colonia Roma and Colonia Condesa, is romantically lit and decorated with all the pomp and circumstance that you would imagine in an eclectic French mansion. The outdoor patio is particularly pleasant on warm summer nights. 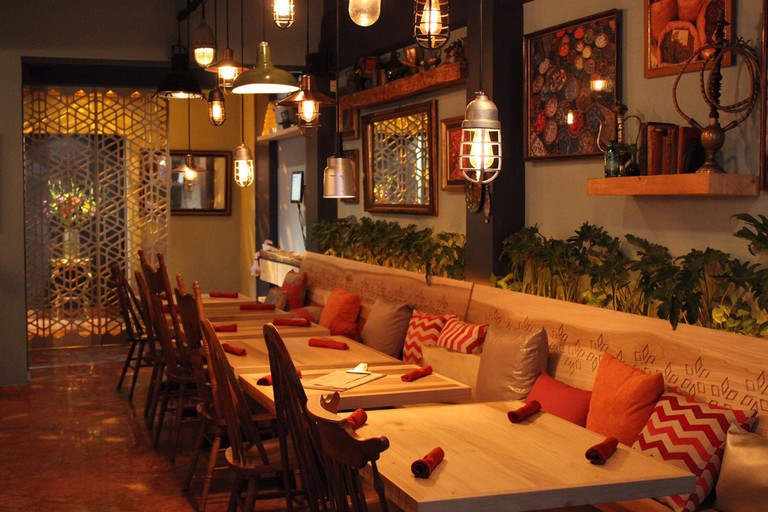 Paprika | Courtesy of Paprika Restuarant
Paprika is brought to us from the folks who started Sesame and is a culinary lesson in Middle Eastern food across countries and regions. Everything from kebobs to Persian meatballs to curries figure in this menu, which delights with a range of spices and flavors. There are lots of dishes to please vegetarians, such as falafel, Iranian rice, couscous, and quinoa salad. Set right off Alvaro Obregon street in La Roma, Paprika is a perfect date-night location and a great place to people watch.
Open In Google Maps
115 Orizaba, Roma Norte Ciudad de México, 6700, Mexico
+15555330303
Visit Website
Give us feedback 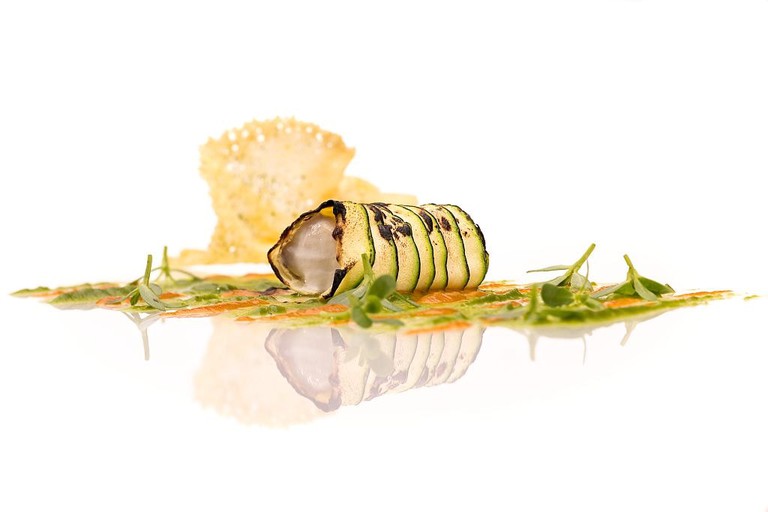 A Spanish–Mexican fusion dish at Biko | Courtesy of Biko Restaurant
Biko combines a litany of seafood dishes and the traditional meats and cheeses of the old continent with the huitlacoche, roasted corn, and peanuts of the New World. This Spanish–Mexican fusion is creatively pulled off with a menu that satisfies eaters of all types. Especially attractive is the extensive list of both Spanish and Mexican wine, with pairing suggestions printed on the menu for those of us with a lack of wine knowledge. This is fine dining with artistically plated specialties and an upscale location on Mexico City’s version of Rodeo Drive, Presidente Masaryk in the Polanco neighborhood.
Open In Google Maps
407 Presidente Masaryk, Polanco, Mexico City, 11550, Mexico
+15552822064
Visit Website
Give us feedback 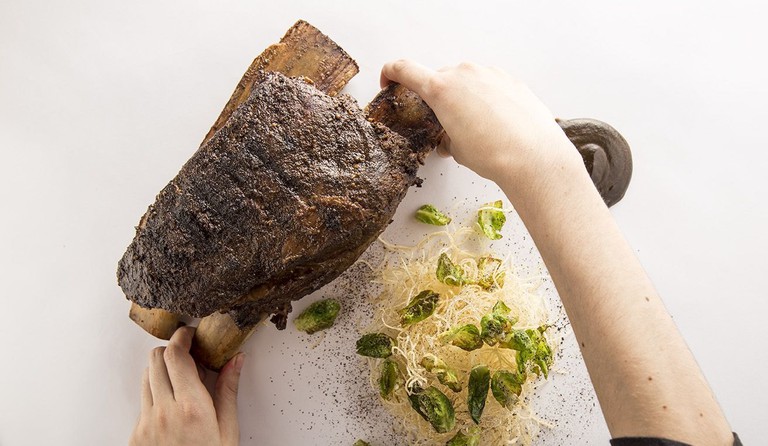 Ribs | © Fernando Gómez Carbajal
Nudo Negro, in an effort not to be pigeonholed, calls its cooking “cuisines of the world.” And while the menu does run the gamut from falafel to vegetable soup, there is a heavy Asian influence, with lots of soy sauce, sambal, lemongrass, and ginger. Mexican chiles feature heavily on the menu and there are several classic Mexican preparations with a twist, such as the duck barbacoa and the pork chamorro. Daniel Ovadia, one of the restaurant’s chefs, came to fame early as one of the youngest chefs in the city, and he continues to expand his culinary empire.
https://www.instagram.com/nudonegro_do/
Open In Google Maps
53 Amsterdam, Colonia Condesa Ciudad de México, Ciudad de México, 6100, Mexico
+525555788779
Visit Website
Give us feedback

Casual, Open Kitchen
Give us feedback