The Best Destinations For Foodies In Mexico 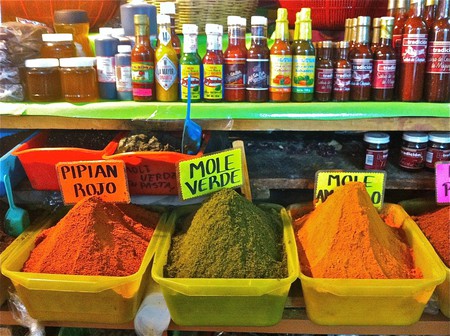 Foodies in Mexico will have no problem at all finding the corn, cheese and chilli combos to satisfy their every craving wherever they go in the country. However, with such an enormous country that has such a gigantic capital and a diverse history of cultural and culinary influences, how would the humble foodie traveller know where to start? Here’s our guide to Mexico’s best foodie destinations and the cuisine that makes them must-visits.

Let’s get the obvious destination out of the way; Mexico City, with its UNESCO recognised street food scene and impressive collection of gourmet dining options makes for the perfect (albeit most unimaginative) foodie destination in the country. From dirt cheap tacos al pastor or de canasta (literally, ‘from a basket’), to heart-warming pozole and fill-the-hunger-hole gorditas, the Mexican capital has it all. However, you must try the city’s trademark pambazos (a sandwich made from distinctive chilli-soaked bread). 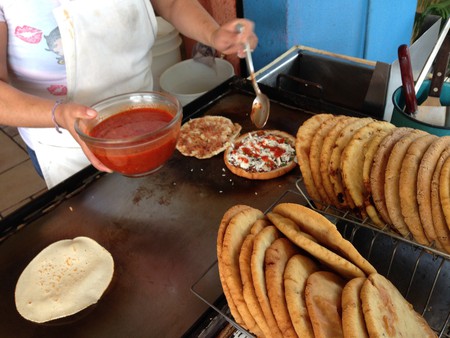 The Baja California peninsula is unsurprisingly famed for its seafood dishes, although the one that stands head and shoulders above the rest is the taco de pescado. Literally just a humble ‘fish taco’, this specialty makes the peninsula an unmissable destination for foodies. If you want to get specific, fans of a lovingly prepared and authentic fish taco should head to Ensenada, on the west coast of Baja, as this was not so long ago recognised by National Geographic as the birthplace of the taco de pescado. 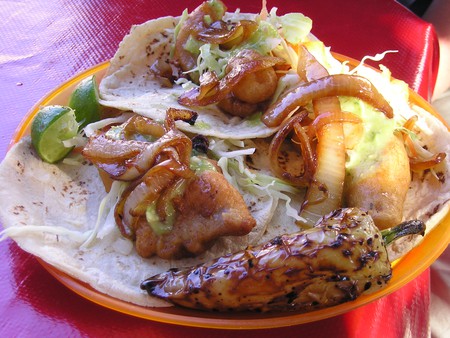 Keeping with the fishy theme, if you want to branch out from the taco de pescado into some different seafood dishes, then Sinaloa is the destination for you. While you might recognise the name Sinaloa (and its capital, Mazatlán) principally due to their links with Mexican cartels, drugs aren’t the only thing this west coast state deal in. Here you can try some of the freshest aguachiles, ceviches and crispy, grilled fish that you like – on a daily basis! Unmissable for seafood fans. 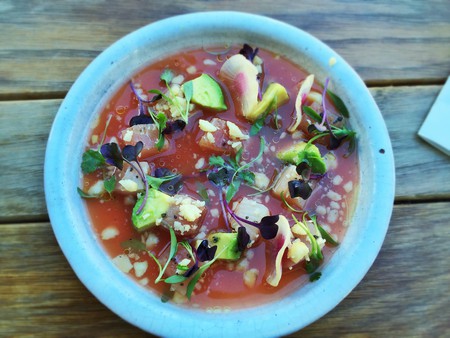 The burrito in its most recognised form is most definitely an invention of Tex-Mex cuisine, although it is often marketed as traditional Mexican comida. However, that’s not to say that there aren’t genuine Mexican variations on this popular dish, one such example being Hermosillo, Sonora’s burro percherón. Typical across both Sonora and Baja, this is a supersized, tightly wrapped burrito served in one of Northern Mexico’s finest inventions ­- the tortilla de harina. Both the burro percherón and the tortillas themselves are more than worth the visit. 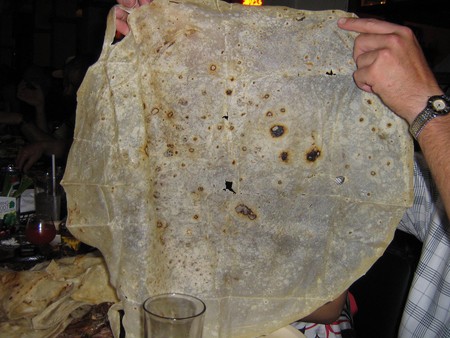 Oaxaca City is another top-rated, must-visit Mexican destination for foodies due to the diverse range of traditional Mexican dishes that either originate here or were perfected here. While the tamales oaxaqueños and queso Oaxaca are notable (and exceptionally delicious) examples of some of Oaxaca’s cuisine, they’re a little more accessible in other states. However, the one dish for which Oaxaca is famous which you can’t get as good anywhere else is the tlayuda. Often called the Mexican pizza, it’s a large crispy tortilla topped with mole sauce, meat, stringy cheese and salad. 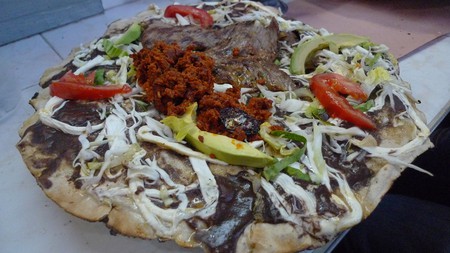 Mérida, the capital of Yucatan, is a slightly more underrated foodie destination than Oaxaca but that’s not to say it’s any less deserving. In fact, this humble and beautiful colonial city has some of Mexico’s best cuisine; cochinita pibil (slow roasted, well-seasoned pork), papadzules (an eggy twist on the typical enchilada), marquesitas mayas (crispy, rolled crepes filled with chocolate spread and cheese). However, an absolute must-try is the crispy, cochinita pibil and pickled red onion topped tortilla dish known as panuchos. 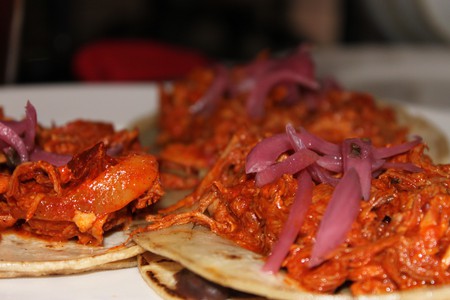 To visit Guadalajara, the capital of Jalisco, and not try birria is a rookie error some would say. That’s because this steaming and spicy goat or mutton stew-style dish is one of the region’s most emblematic. In fact, one birria joint in Guadalajara (Karne Garibaldi) holds the Guinness World Record for the speediest service; from ordering to receiving your food, you can expect a wait of around one minute! However, an honorary mention must go to the hangover-busting, super-spicy torta ahogada (a ‘drowned’ sandwich, filled with pork and onion), which is just as iconic in Guadalajara. 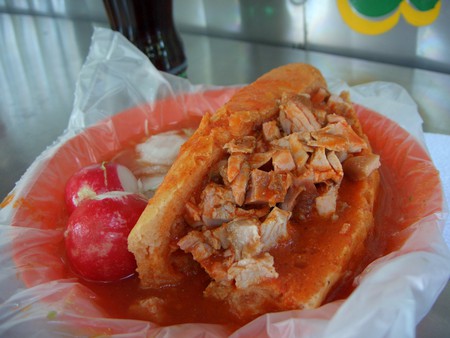 Puebla is the perfect destination if you’re on the hunt for the perfect spicy, yet chocolaty, plate of mole. In fact, what many people don’t realise is that mole is actually called mole poblano (meaning it comes from Puebla), and given that there are hundreds of different types, twists and variations on the most famous brown-coloured, chocolate mole, you’ll never run out of new combinations to try. Aside from mole, when in Puebla (and if you’re there in the right season) try and get your hands on some authentic chiles en nogada too.

Michoacán, the state in which Morelia is the capital, got a special shout out from UNESCO when the country’s cuisine was recognised as a piece of intangible cultural heritage. This is because of the state’s use of traditional culinary methods, and is just one of the reasons foodies should consider visiting this often in turmoil destination. Morelia, as the state capital, is the perfect place to begin; while there, be sure to try carnitas (fried pork), as well as corundas (a triangular dish, akin to a tamal) and ate (a jellied fruit sweet that is typically eaten with cheese). 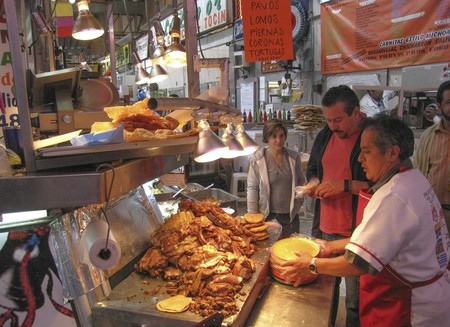 The zacahuil is a supersized version of the perennially popular tamal that can be found across Mexico. However, the zacahuil can most commonly be found in Veracruz. Lovingly prepared by hand, for special occasions, or even just for a breakfast fit to feed the entire family, this huge savoury dish is wrapped in banana leaves before being cooked. Just one zacahuil can supposedly serve anywhere from 50-150 people. 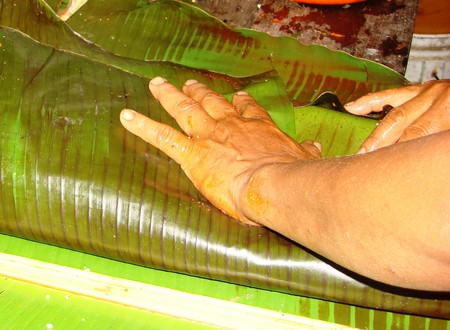 You might think that the commonly spotted pasty is actually a British invention and you’d be correct. The reason for which the state of Hidalgo is famed for its Hispanicized pastes is due to the influence of Cornish miners who emigrated to Mexico to work in the Hidalgan mines. They brought with them their pasty-eating ways and the rest, as they say, is history. Therefore, anyone interested in all things Br-exican would be silly to skip over Hidalgo state. 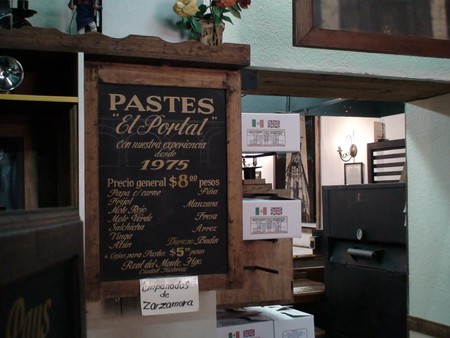 Finally, we round off our foodie guide to Mexico with the capital of Nuevo León – Monterrey. Anyone who’s heard word of Monterrey, a state not often visited by the casual tourist but rather by business travellers, knows that it’s famous for cabrito (goat). While this is a typical dish of the region, you should also make the effort to get invited to a carne asada while you’re in Regio territory as these also make for key cultural – and culinary – experiences when visiting one of Mexico’s northernmost cities. 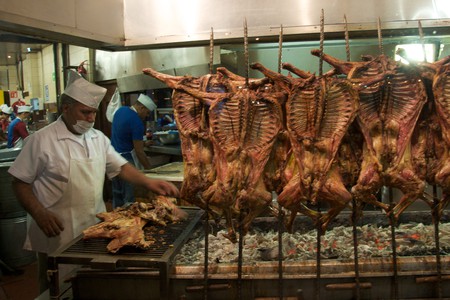