The Art of Diego Rivera: A Tour Through Mexico City

Diego Rivera is revered and remembered as much for his iconic murals, paintings and sculptures, as he is for the pivotal role he played in preserving Mexico’s indigenous cultural heritage. A tour of some of Mexico City’s finest museums, palaces, houses and parks is the best way to see the fantastic range of Rivera’s artistic output. 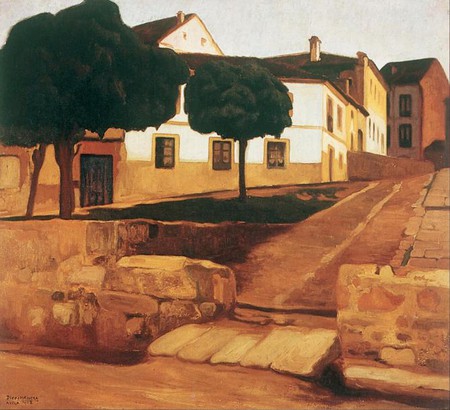 The inner walls of the Palacio de Bellas Artes are adorned with works by the grandfathers of Mexico’s muralist movement: Rufino Tamayo, Diego Rivera, José Clemente Orozco and David Alfaro Siqueiros. Among the murals is Rivera’s ‘Man, Controller of Universe’, which he originally created for the Rockefeller Center in New York. The mural depicts the captains of industry prospering at the expense of the populace, while Vladimir Lenin stands off to one side at forefront of the red rebellion. The presence of Lenin and Rivera’s refusal to remove him caused such controversy that Rivera was dismissed and the mural was destroyed. Rivera had already been paid however, and he vowed to recreate the mural for anyone who asked him until the commission funds ran out. The recreated work in Mexico City is a joy to behold, not least for the sheer scale and color of it.

Between 1929 and 1950, Diego Rivera painted murals in the Palacio Nacional that relate the history of the Mexican people, from their pre-Hispanic origins to the middle of the 20th century. Rivera’s primary concern was to give a voice to the indigenous communities and cultures of his country. The stairway mural in the palace, finished in 1935, narrates the history of Mexico in three parts. The central panel focuses on the country’s wars and conquests from Cortes onwards. A high-resolution virtual tour shows the striking images and impressive tableau that await any visitor to the Palacio Nacional.

In 1929 Juan O’Gorman, the architect and friend of Diego Rivera, began building a studio and house, where Rivera and Frida Kahlo would live and paint some of their most famous works. The buildings are as striking now as they would have been then, combining elements of traditional Mexican architecture with functionalist design. The studio features artwork and tools used by Rivera, and houses an extensive collection of indigenous artwork collected by Rivera and Frida Kahlo. A virtual tour of the properties is possible thanks to the Instituto Nacional de Bellas Artes.

Dolores Olmedo was a Mexican businesswoman and art collector who Rivera met when she was a young woman. Rivera painted her many times, most famously in the Nude of Dolores Olmedo. The friendship the two formed lapsed into estrangement for the better part of two decades, and it was only rekindled when the two met again after the death of Frida Kahlo. It was at this time, under the guidance of Rivera, that Olmeda began collecting art in earnest. The Museo Dolores Olmedo is located in Xochimilco, where boats still float along the Aztec canal network hundreds of miles long. The museum houses the largest collection of Rivera’s paintings, close to 150 pieces, including much of his early work. 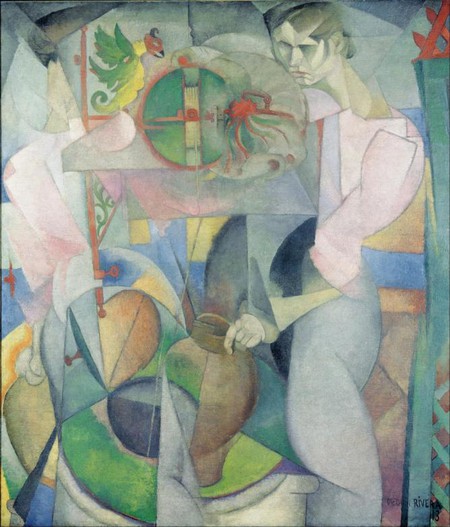 The Woman at the Well Museo Nacional de Arte | © Dcoetzee/Wikicommons

The National Art Museum in Mexico City is housed in the former neoclassical building of the Palace of Communications. The museum contains a large collection of Rivera’s paintings, including pieces that he painted in Paris while on a scholarship to Europe. Among these is ‘Zapata-style Landscape’ (1915), in which Rivera combines elements of cubism with distinctly Mexican imagery. The focus of the painting is the Mexican Revolution, and the world of the revolutionary Emiliano Zapata is represented by a gun, a hat, and riding gear. Upon restoration of the painting, MUNAL found that the other side of the canvas had been painted over, and after much labor the previously unseen work of ‘The Woman at the Well’ (1913) was unveiled in a double-sided frame.

Diego Rivera was a great believer in the rich cultural heritage of Mexico, and over the decades amassed a vast collection of sculptures, paintings and artifacts. The bulk of Rivera’s collection can found in the museum he had built to house the Museo Diego Rivera Anahuacalli, which was finished after his death. The building draws on Aztec and Mayan architectural motifs, resembling a monolithic pyramid. Rivera maintained that his aim was to give back to the people as much of their artistic heritage as he could salvage. With over 50,000 pre-Hispanic artifacts, and an iconic museum that continues to promote Mexican artists, Rivera was true to his word and left the world an astounding legacy. 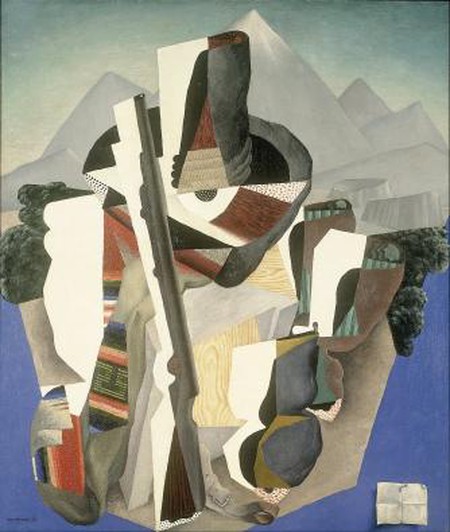 The Cárcamo de Dolores, maintained by the Museo de Historia Natural y Cultura Ambiental, is part of the old waterworks system. It features a large mural by Rivera and a giant sculpture of the rain god Tlaloc. The mural was previously underwater, as the pool was a functioning structure of the city’s reservoir system, with the brilliantly colored images depicting scenes of fertility and the vitality of water were being slowly destroyed by the elemental force they portrayed. After much restoration, the fountain sculpture and the murals are now well worth the visit in Mexico City’s Chapultepec park.

The Museo Frida Kahlo, also known as the Blue House, was the house where Frida Kahlo was born, raised and died in, and was where she lived for a time with Diego Rivera. Along with artwork by Rivera, the house contains letters, drawings and possessions of the artist, as well as a series of interviews. It is impossible to get an overview of Rivera’s life without recognizing the importance of Frida Kahlo. The two artists influenced each other greatly, and the entire building is a monument to their work and creative life. Rivera’s presence can be felt throughout, from the hundreds of artifacts and paintings, down to the artwork and seashells embedded in walls by Rivera when he expanded the building. 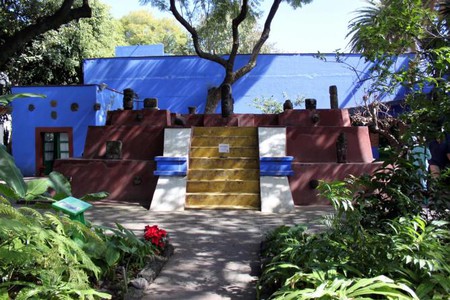