The 7 Coolest Neighborhoods in Guadalajara 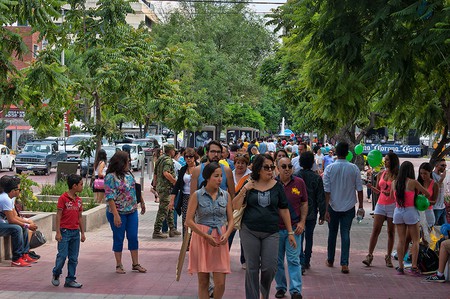 Known as the birthplace of tequila and mariachi music, in terms of neighbourhoods Guadalajara is a city that was divided historically into east and west. The east was always considered the domain of the lower classes, while the west as the residence of the upper classes. With this division still maintained today, here’s our guide to the most vibrant neighborhoods in the city.

In recent years the area of Chapultepec has undergone a remarkable growth and a constant remodeling of its main streets, in addition to the construction of apartment towers and the opening of new restaurants, bars, cafés, bookstores, and designer shops. Every Saturday the avenue is home to a variety of concerts where crowds of people go out for a walk and meet new friends.

Built on commerce, this neighborhood is a square delimited by the Americas, Mexico, Enrique Díaz de Leon and Jesús García Avenues. In its center is the Municipal Market, and around this there are a lot of shops, banks and restaurants. For food, try Karne Garibaldi, a world-famous Guinness Record holder for the speed of its service. You can also enjoy authentic Japanese food at Usagui, a restaurant run by Japanese migrants.

Not too close, yet not too far from downtown, this colony was always considered the ideal place to live, and as such is home to the official house of the Governor of the State, Casa Jalisco. In recent years the main avenues of the area have been filled with new upscale and trendy restaurants and shops, hotels, cafés and bars that have given new life to this large neighborhood.

If you are looking for something more original, then this neighborhood is the one for you. As one of the oldest in the city, it still retains some of the ancient houses and temples. Of course, like any self-respecting neighborhood in Mexico, it has its local market where you can try typical dishes of the region. Make sure you don’t miss the famous Nieves de Garrafa for it homemade ice cream.

Before the expansion of the city in the last 30 years, this area was a resting place on the outskirts. Now it has been encompassed within the city, but still retains its large roundabouts, parks and houses with large gardens, and is an ideal place for a coffee on an afternoon. Don’t forget the Glorieta Chapalita, where every Sunday local artists offer their work to visitors.

This area of the city still retains the air of a typical Mexican village, making it perfect any day of the week for a wander through its cobbled streets, visiting the galleries of local artists such as Paco Padilla, eating some delicious local food or having a tequila in El Parián.

What was once a small town where corn was sown, is now one of the most attractive neighborhoods to visit in the city, with the Prolongación 20 de Noviembre avenue as the main axis where you’ll find restaurants and cafés. Don’t miss a traditional Mexican dinner in the Fonda de Doña Gabina Escolástica.