The 10 Most Beautiful Churches In Mexico 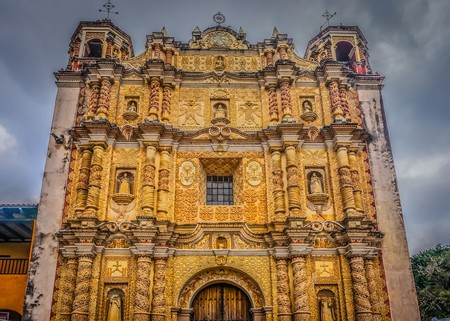 Catholic Mexico has no end of exquisite churches, temples and ex-convents for the intrigued traveller to take a look at; some feature unique and eclectic architecture, while others have outstandingly ornate interiors. While we’ve already explored the country’s most beautiful cathedrals, it’s time to discover the churches – here are our top 10 most aesthetically pleasing selections. 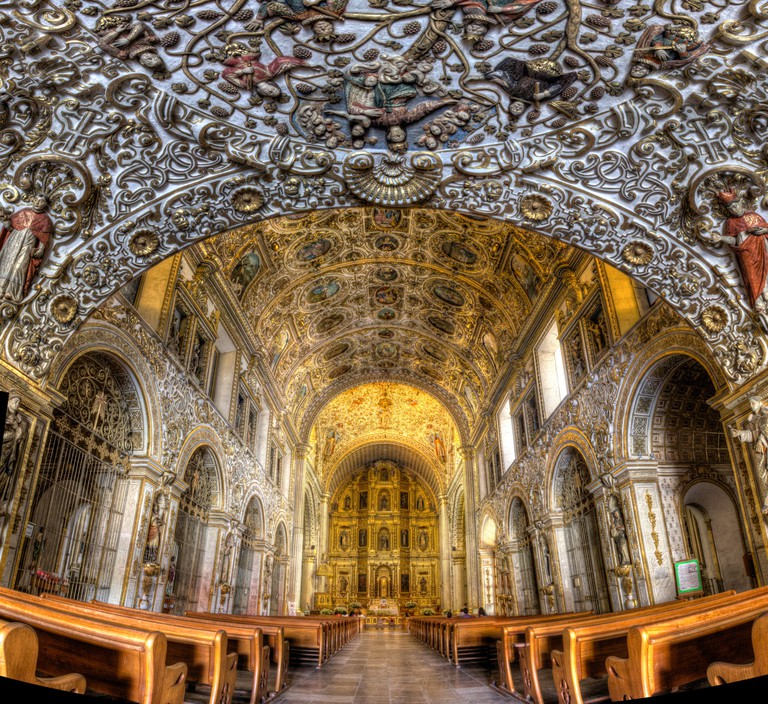 Templo de Santo Domingo, Oaxaca | © Carlos Adampol Galindo/Flickr
This edifice is an icon not just of Oaxaca City, but of Mexico as a whole, given that it’s one of the country’s top tourist attractions and, despite once being a monastery, is now home to a well-curated museum. As it’s situated at the end of one of Oaxaca’s most central and well-trodden pedestrianised avenues, thousands of people pass through the doors of this temple year on year to admire the heavily decorated interior décor, and you really should too.
Open In Google Maps
s/n Calle Macedonio Alcalá, RUTA INDEPENDENCIA, Centro Oaxaca de Juárez, Oaxaca, 68000, Mexico
+529515163720
Give us feedback 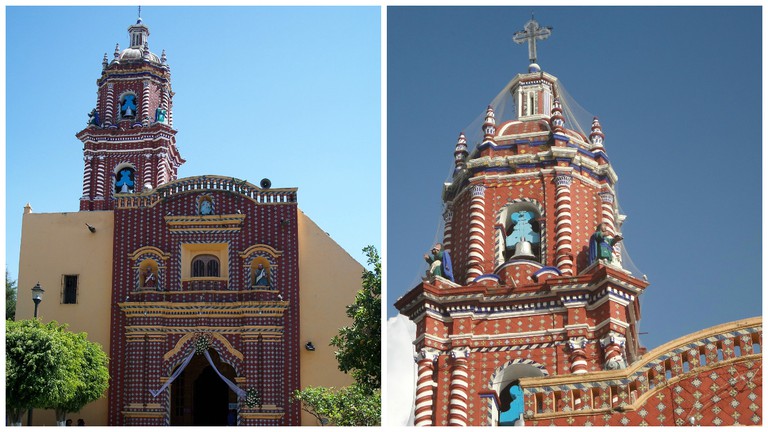 Iglesia de Santa María Tonantzintla, Cholula | © Alejcasvi78/WikiCommons / Detail of the church | © Danielllerandi/WikiCommons
Cholula is one of the towns in Mexico known for its almost ridiculous quantity of churches and religious buildings – common local sayings attest to the fact that there’s practically a church on every corner. However, one of Cholula’s stand-outs is the Christian and indigenous masterpiece known as the Iglesia de Santa María Tonantzintla. The architecture is an elegant mixture of Baroque with native motifs and decoration, including some truly eye-catching tiling on the external walls.
Open In Google Maps
o Avenida M. Hidalgo, San Diego, Santa María Tonanzintla San Andrés Cholula, Puebla, 72828, Mexico
+522226666214
Visit Website
Give us feedback 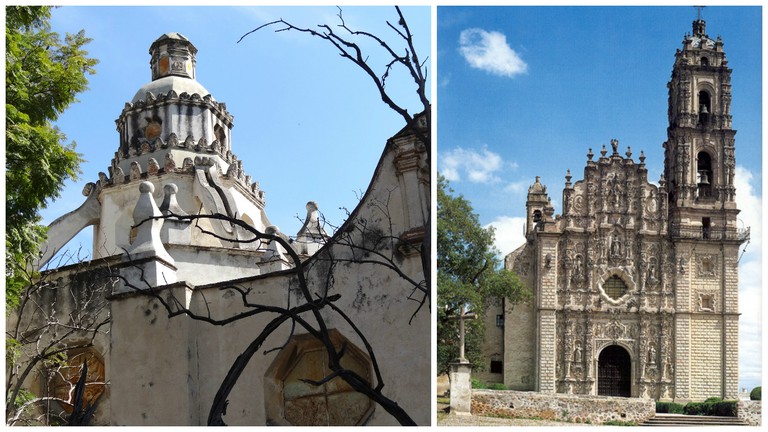 Templo de San Francisco Javier, Tepotzotlán | © Adam Jones/Flickr / © WikiCommons
Mexico State’s Tepotzotlán, not to be confused with the hippy town of Tepoztlán, is home to a stunning example of Baroque Churrigueresque architecture and although it’s smaller than many of the churches to make our list, it’s perfectly formed. The grey stone walls add an austere touch to this church, which hides within it 10 resplendent golden altar pieces and a selection of massive, signed Miguel Cabrera murals.
Open In Google Maps
99 Avenida Insurgentes, San Martin Tepotzotlán, Estado de México, 54600, Mexico
+525558762770
Visit Website
Give us feedback

The second Templo de Santo Domingo to make our list, this one is to be found not in Oaxaca but in the understandably popular traveller town of San Cristóbal de las Casas. Architecturally speaking, this is one of the state’s greatest examples of Chiapan Baroque and the ornate façade features exquisite rose coloured stone as well as indigenous symbols. Stepping inside, you’ll find a skilfully carved oak pulpit and several altarpieces. 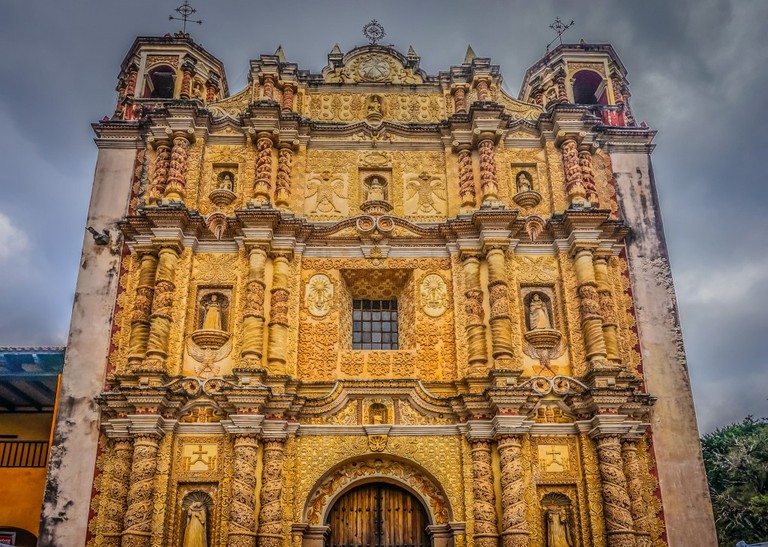 Mexico City’s Basilica is the world’s most heavily frequented Catholic attraction, drawing thousands of curious onlookers and religious pilgrims each year. However, while the modern basilica is where most of the action now takes place, the old basilica is easily the more beautiful edifice. After many years of restoration, due to the sinking foundations of practically the entirety of Mexico City, the old basilica is now open to the public once more and makes for an unmissable Mexican attraction. 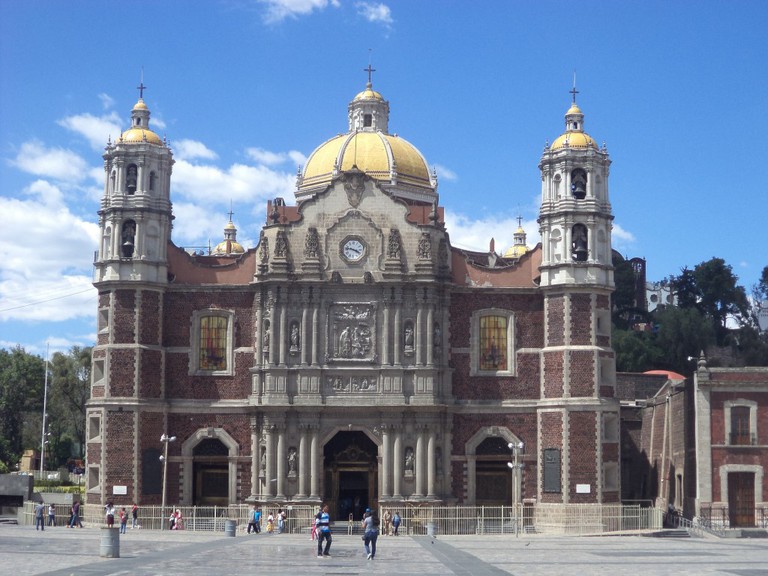 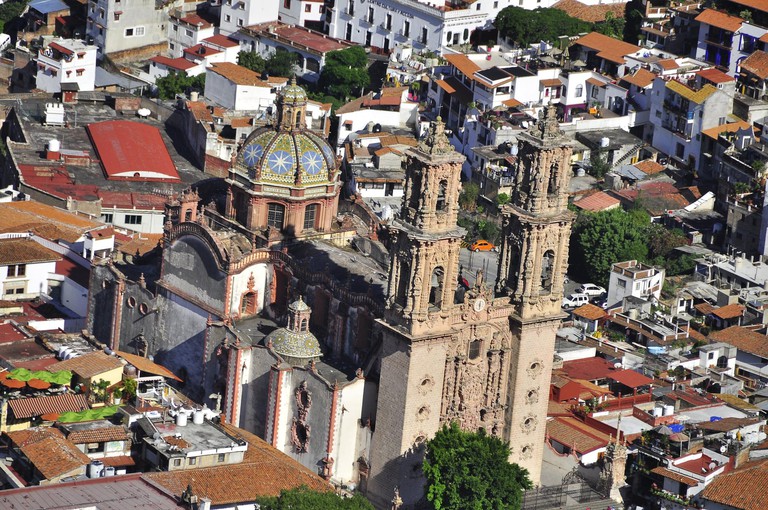 Santa Prisca de Taxco, Taxco | © pegatina1/Flickr
The colonial Guerrero town of Taxco, most famously known for its abundance of silver products, is also the home of one of the country’s most spectacular and emblematic churches. Officially titled the Parroquia de Santa Prisca y San Sebastián, Santa Prisca de Taxco is an 18th-century example of Baroque – in fact, it is one of the state’s only pieces of Baroque architecture. Formerly the tallest building in Mexico, Santa Prisca is a stunning, must-visit church.
Open In Google Maps
1 José de La Borda, CNOP Taxco, 40200, Mexico
+527626220183
Give us feedback

Puebla City’s first and only entry on our guide to beautiful churches goes to the Parroquia de la Santa Cruz, which is a smaller and simpler offering than some of the enormous, hugely ornate examples we’ve seen so far. However, despite its apparent simplicity, the vibrant exterior walls are still beautifully decorated, as is the colourful blue and yellow tiled dome and the interior décor is just as impressive as the external offerings. 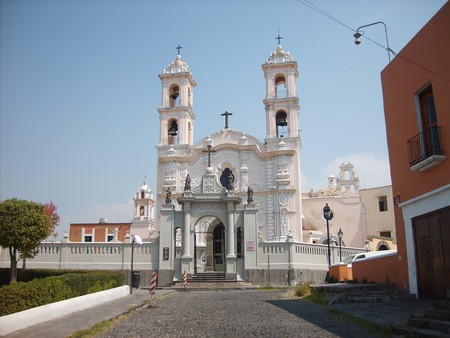 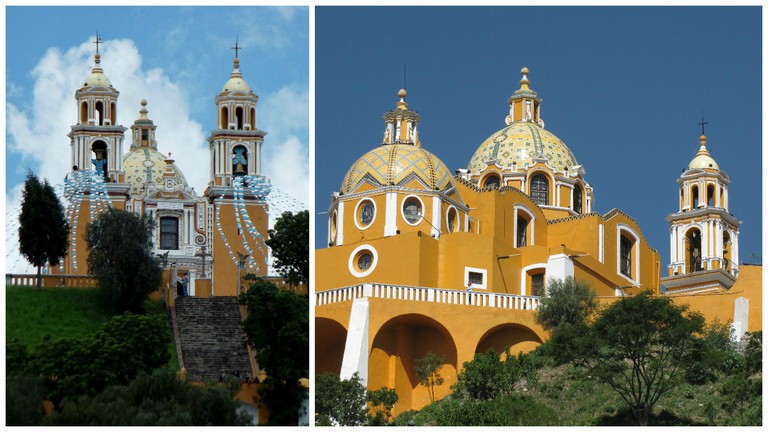 Iglesia de Los Remedios, Cholula | © Luis Romero/Flickr / © Gerardo Noriega/WikiCommons
The second Cholula entry goes to Iglesia de Los Remedios. What? You thought we were only going to include one example from the town which is known for its wealth of spectacular churches? Not likely! Built, as with many Catholic symbols of dominance, atop the remnants of an ancient pyramid, Iglesia de Los Remedios has a simple exterior archway which leads into a Neoclassic interior. On a clear day, the church boasts panoramic views over its surroundings.
Open In Google Maps
Ferrocarril, San Miguel, Zona Arqueológica San Andrés Cholula San Andrés Cholula, Puebla, 72760, Mexico
Visit Website
Give us feedback

Iglesia de San Juan Parangaricutiro, Parícutin | © Thomassin Mickaël/Flickr
We’ve talked about this church before, given its unusual (to say the least) location in the middle of a town almost entirely flattened by the explosive tendencies of the nearby but now extinct volcano. It’s that unique set of circumstances that makes this edifice one of Mexico’s most beautiful, albeit partially obscured, churches. While only the spires poke out from the now solidified lava surroundings, part of the interior altar can still be seen.
Open In Google Maps
San Juan Parangaricutiro, Michoacán, Mexico
Give us feedback

Finally, the western state of Jalisco is represented by one of its capital city’s most magnificent temples, the Templo Expiatorio del Santísimo Sacramento. Unique to this list in that the architecture is Neo-Gothic rather than Baroque, it remains one of the country’s grandest examples of this style. The façade allows the huge granadilla wood doors, dotted with bronze reliefs, to stand out, as well as the stained-glass windows. However, its clock is perhaps of most note; imported from Germany, whenever it plays music, miniature figures of the 12 apostles rotate in and out of the tower. 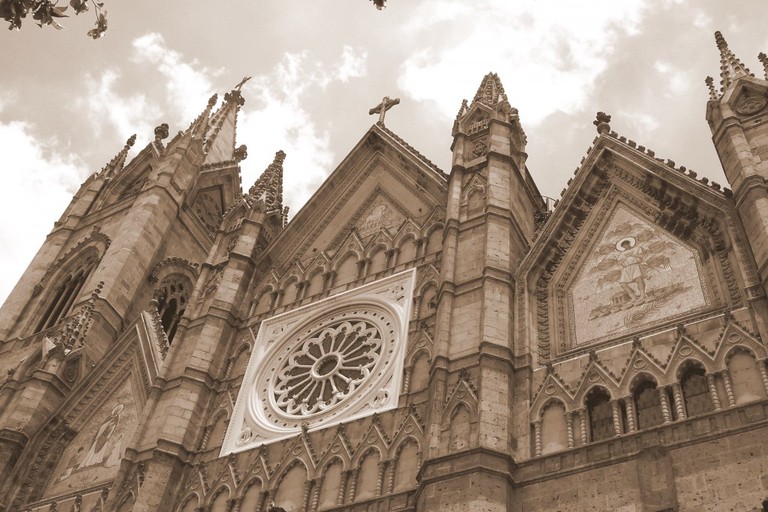