The 10 Best Spots For Chilaquiles In Mexico City

Chilaquiles at home | © Dietrich Ayala/Flickr
Chilaquiles are one of the all-rounders of the Mexican breakfast world; eat them with spicy sauces, mild cream and a sprinkling of cheese, pile them high with shredded chicken and fresh onions, or stuff them in some bread and call it a sandwich. Each iteration tastes just as good as the last, and while practically every breakfast spot in Mexico City will serve them, where are the best places to go? Here are our top 10.

Kicking off our list is an iconic, immensely popular and quaintly kitsch chilaquiles destination, which sits just on the border of the Condesa neighbourhood. Chilakiller’s (excellent name) is famed for its delicious chilaquiles, and as a result is always stuffed to the rafters on weekends when hungover chilangos flock en masse for a plate of hangover busting tortillas doused in sauce. Large portions are a given and we recommend trying out the cochinita pibil versions, or adding a fried egg in to the mix, before picking out the perfectly spiced sauce for you.

While this relatively unassuming, albeit popular, chain of Mexico City bookstore-cum-cafés might not be the obvious choice for a delicious plate of chilaquiles, Cafebrería El Péndulo is most definitely one of the city’s most reliable chilaquiles destinations. There’s nothing more idyllic than ordering a plate of chilaquiles – choose from chicken or another meat, topped with cilantro and onion – all the while being surrounded by books. The best thing? There are multiple destinations across the city centre. 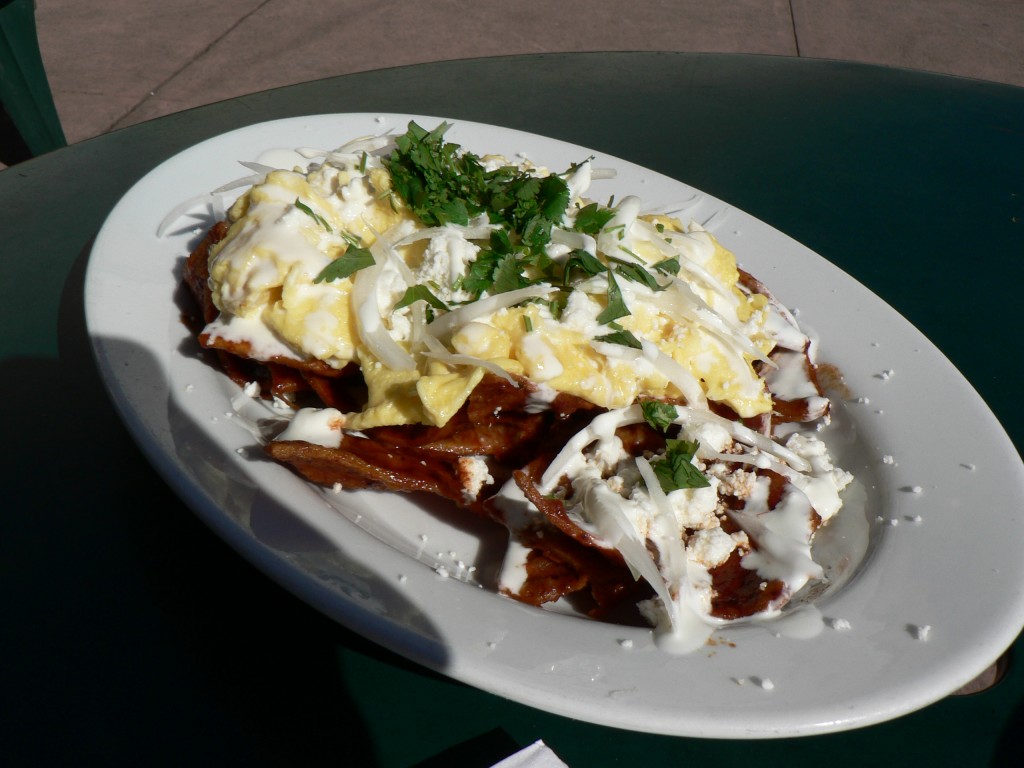 With two branches in the Mexican capital, Ojo de Agua is a health food store and café that is reputed for serving up some of the most flavoursome (and wholesome!) chilaquiles in the city. If you’re looking to indulge in what is probably not one of the healthiest of Mexican breakfast options, then Ojo de Agua is a good middle ground. Fresh vegetables and ingredients go into their chilaquiles, which practically overflow the plate. 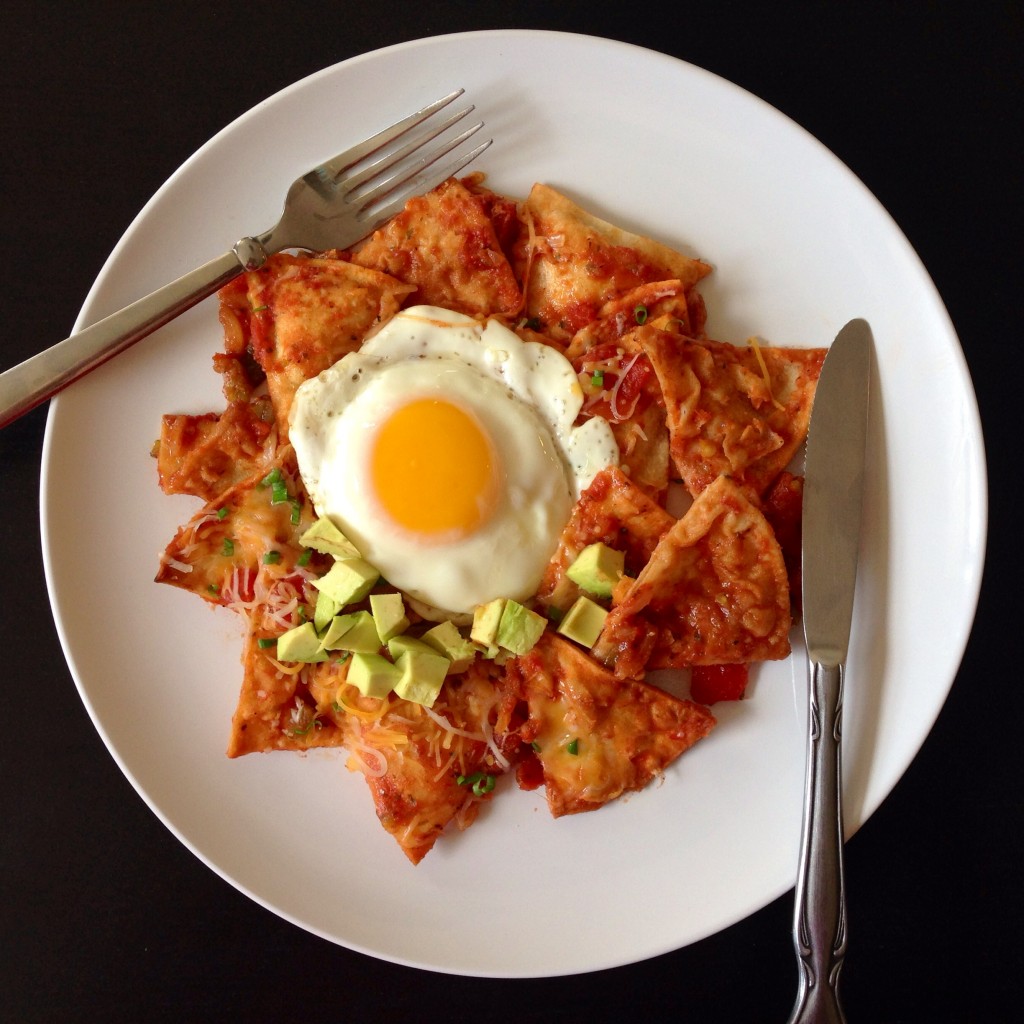 As the name suggests, this Mexican locale is owned and run by a married couple who go by the names of Chava and Judith, and has been for over 40 years. Although they’re now helped out by other staff members, including their own son, this is a legendary chilaquiles destination in Mexico City that you can’t afford to miss – even if they are only available on Fridays. Each day is dedicated to a different dish, but definitely don’t miss your once weekly opportunity to try out their salsa verde version of this staple meal. 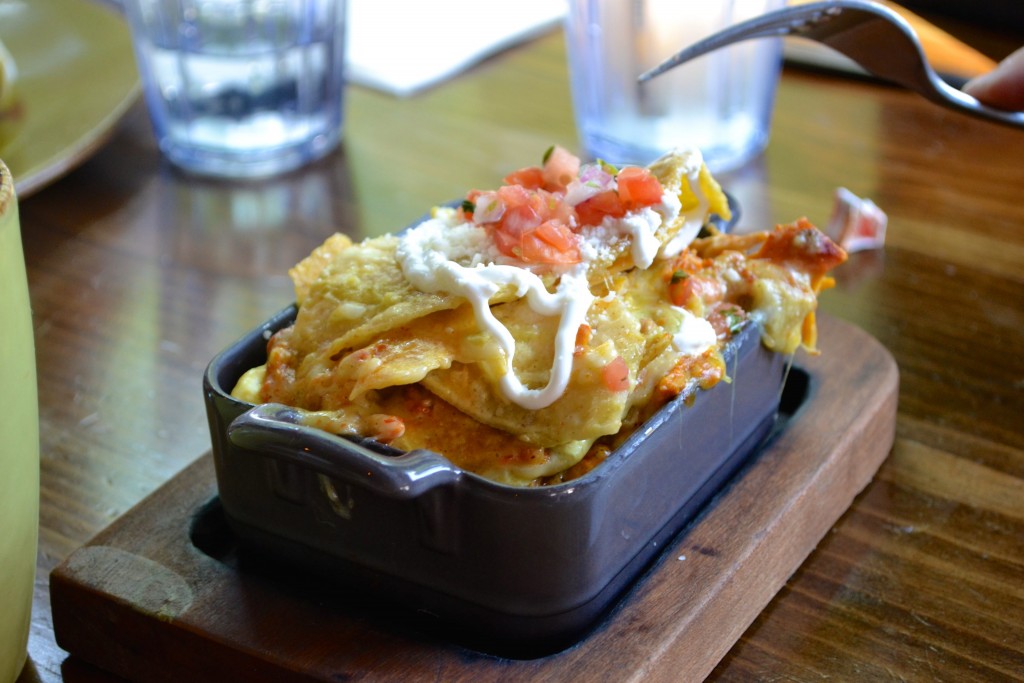 A relatively new entry to the breakfast and chilaquiles world in Mexico City, Chilpa (named for its location at Chilpancingo 35) is a great and relatively untapped option. Combine your salsas for a perfect chilaquiles experience, or enjoy the quite frankly ingenious invention that is the torta de chilaquil – it does what it says on the tin and turns the chilaquiles from a knife-and-fork affair into a sandwich. Plus, they have some relatively unique options, such as goat cheese or Cecina de yecapinxtla (a dried, cured meat).

The amusing name of this Nápoles chilaquiles spot might be lost on non-Spanish speakers – for reference, Los Hijos del Maíz literally translates to ‘The Children of the Corn’– but there’s nothing scary about the excellent chilaquiles served up here. What makes this place unique is the sweet chilaquiles options that you can try; for example, chilaquiles with cajeta (dulce de leche). If savoury flavours are more your thing though, they have Jalisco style birria versions and huitlacoche (corn smut) for vegetarian diners. 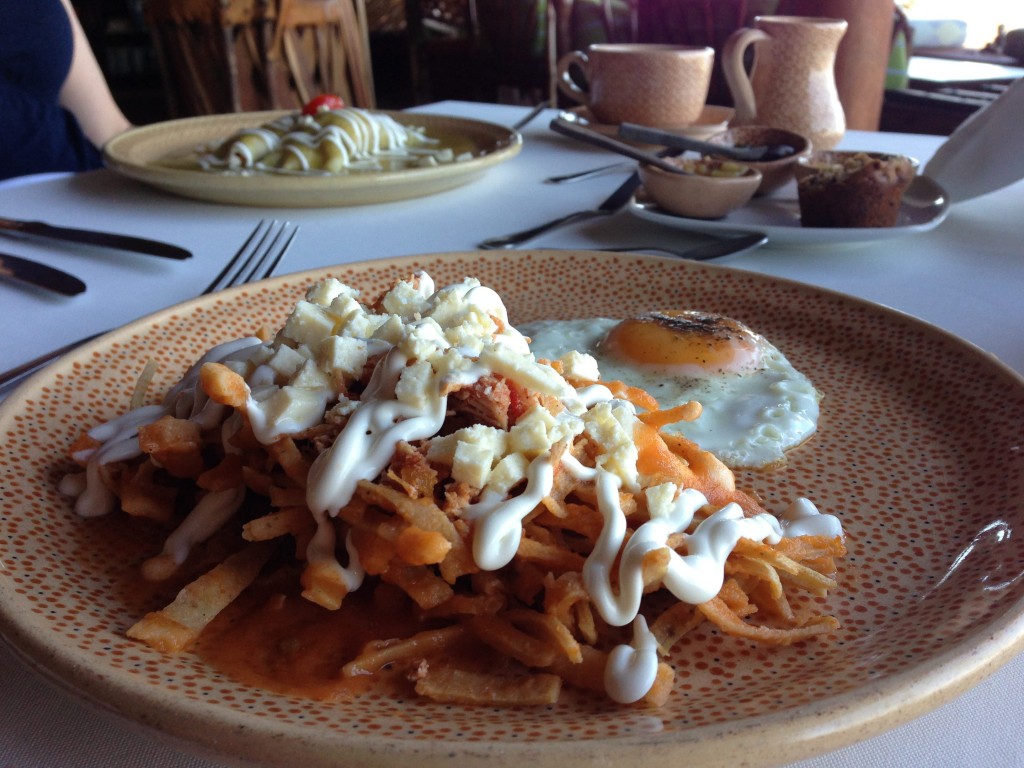 A legendary destination in the Condesa, La Esquina del Chilaquil is a famed corner which offers chilaquiles in all their forms. Always plagued (or blessed?) with incredibly long lines, the tortas de chilaquiles served up here are more than worth the wait. For 363 days a year (every day but Christmas Day and New Year’s Day) this corner has been serving up some of the best street chilaquiles in the city. With reasonable prices and a selection of sauce and meat combos, get there early. 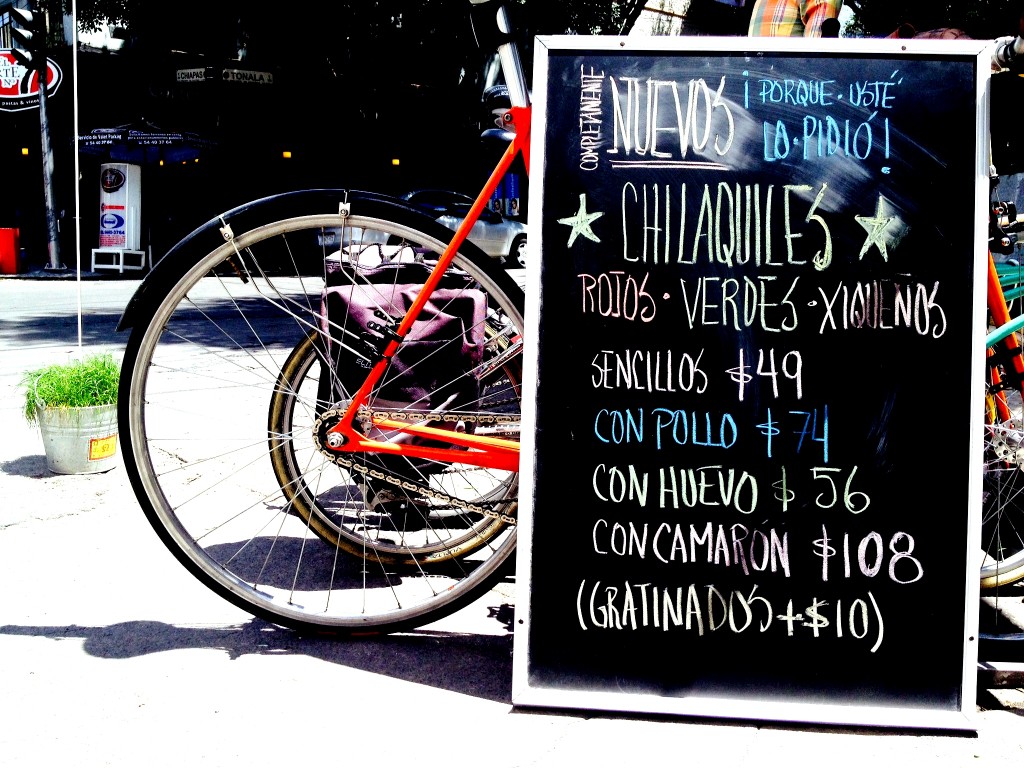 A cute option in Lomas de Chapultepec is La Lorena. This small but perfectly formed café is decked out in hues of blue and white, with a shabby chic interior, and it offers a wide selection of well-presented and handmade dishes. While this alone might have sold it for you, if it didn’t then their chilaquiles definitely should. Lightly sauced and in strips rather than the traditional triangles, the fried tortillas have the perfect level of crispiness. 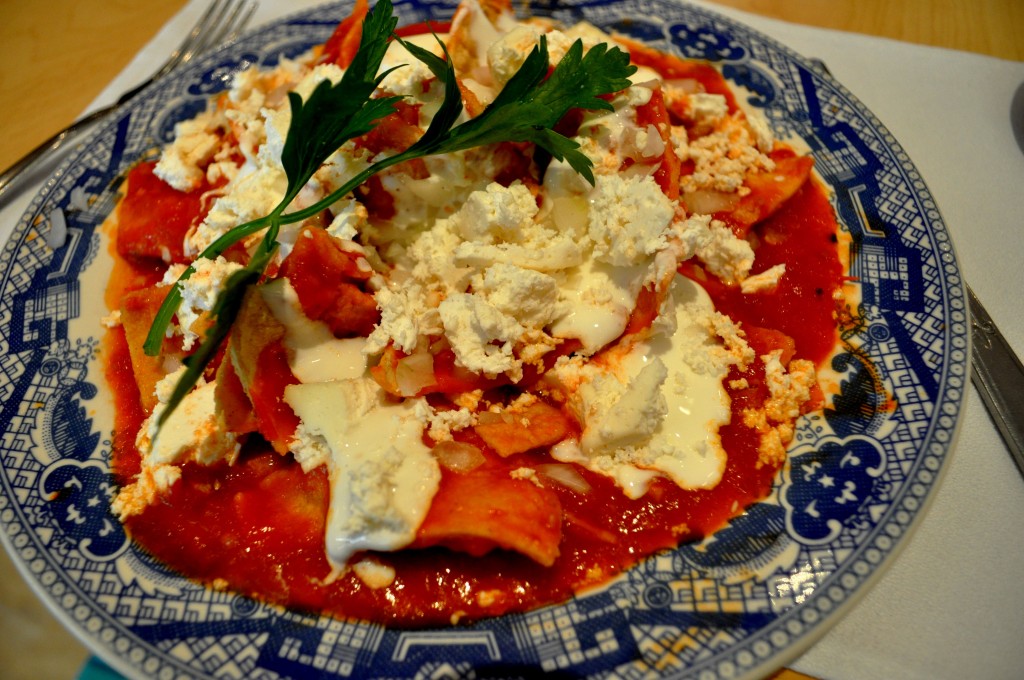 Finally, a classic breakfast option in Mexico City’s historic centre – El Cardenal. Known for being packed full of clients, both visitors and locals alike, make sure you get there early if you actually want to have breakfast that day. With almost half a century of experience, the traditionally prepared and presented chilaquiles here are really the definition of ‘you can’t go wrong’. We recommend accompanying your chilaquiles a la veracruzana with a mug of hot chocolate. 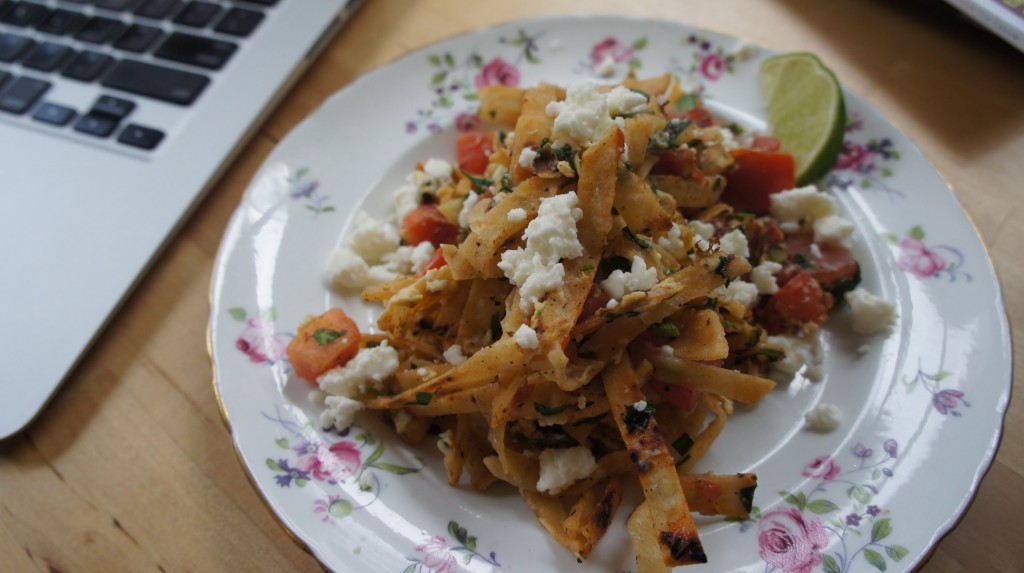