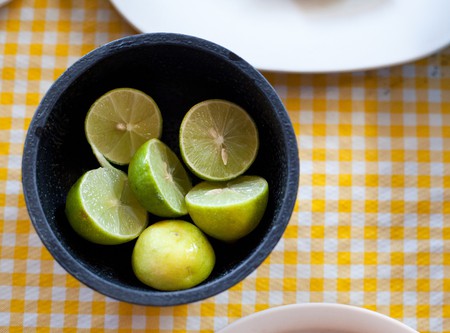 The chefs at Cabo San Lucas’ restaurants like to blur the lines between cuisines. Menus cross Mexican food with Argentinian, American and Italian, so you can look forward to dishes such as habanero linguini and jalapeno-and-honey pizza. The town’s beachside setting means that seafood plays a starring role on menus, and with surf comes turf, so you’re never far away from a good steak when you stay here, either.

Mexico meets Midsummer Night’s Dream at Casa Martin near the marina. The restaurant is set behind a set of heavy wooden doors with a gargoyle knocker. Tables, meanwhile, are spread between a thatched palapa and a stone-walled courtyard that’s curtained with creeping plants and fairy-lit at night. The chef fuses Mexican and European cuisine to make dishes such as habanero linguini; the wine list showcases Mexican reds such as Kruger cabernet tempranillo.

The tables at Metate Cabo are spread around a garden of fairy-lit trees and muscly cacti, and topped with traditional Mexican textile runners and Day of the Dead skulls. The menu here is authentically Mexican. Don’t miss the tlayuda – toasted frisbee-sized tortillas topped with ingredients such as black beans, mole, cheese and chorizo. Feeling brave? Try a shot of Metate’s special tequila – forget the worm, there’s a whole rattlesnake in the bottom of this vat-like bottle. 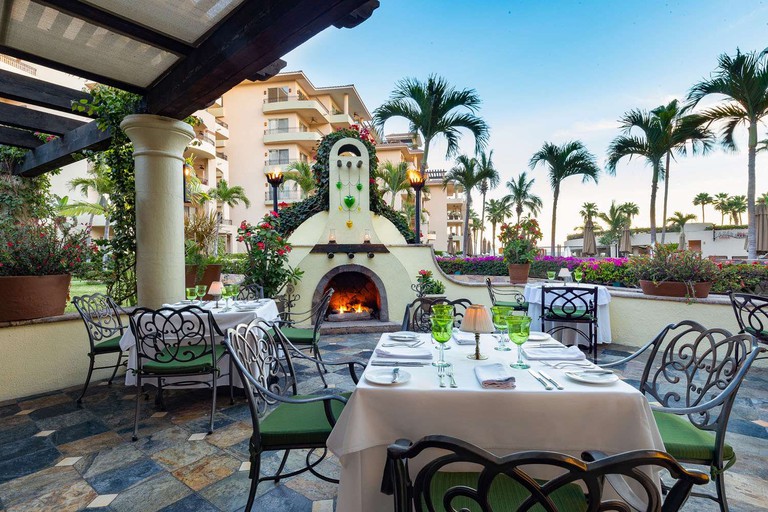 © La Casona
The scent of fire and salt fills the air at this fine-dining restaurant in the grounds of Villa Las Estancia, near Medano Beach. The menu revolves around seafood dishes and steaks, which are dry-aged onsite. Diners who want the best of both can opt for the surf-and-turf platter, which comes with beef tenderloin and lobster tail. The wine list, meanwhile, is seemingly endless, and includes a few Mexican options from vineyards such as Roganto in Baja California. 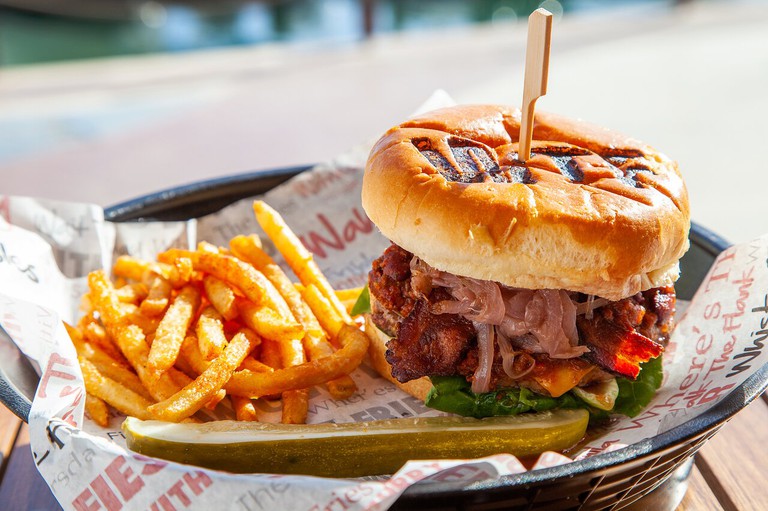 © WTF Burger
You don’t need to go large at this marina-side restaurant, because that’s the default size of the dishes served here. Burgers come fully loaded, onion rings are served in Pisa-style leaning towers, and the cocktails – try the guava margarita – are poured into goblet-sized cups. For a taste of Mexico, go for the macho burger – it’s topped with roasted poblano pepper, avocado, jalapeños, roasted onion, tomato and chipotle mayo. 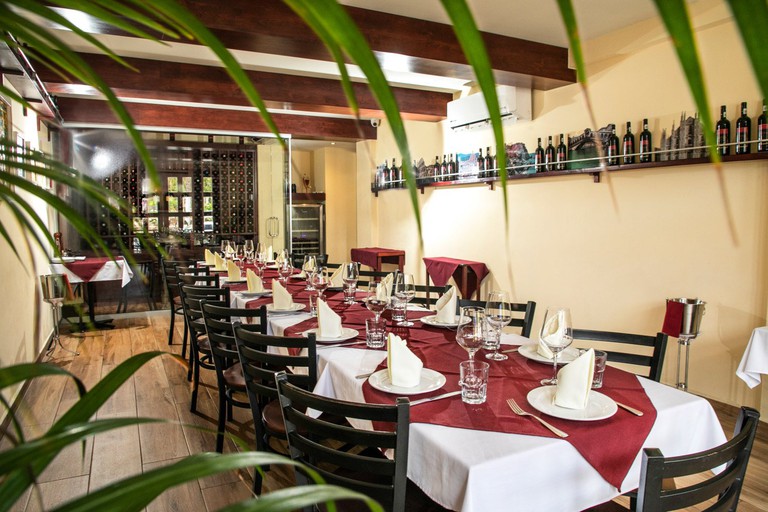 © Invita
This bistro, a few streets back from the marina, flies a green, white and red flag, but it’s not Mexico’s – the menu here is wholeheartedly Italian. House specialities include the aubergine parmigiana starter and classic lasagne entrée. Groups of four or more can book wine tasting sessions that pair four Mexican or Italian wines with small plates such as salmon crostini and gorgonzola mushrooms. 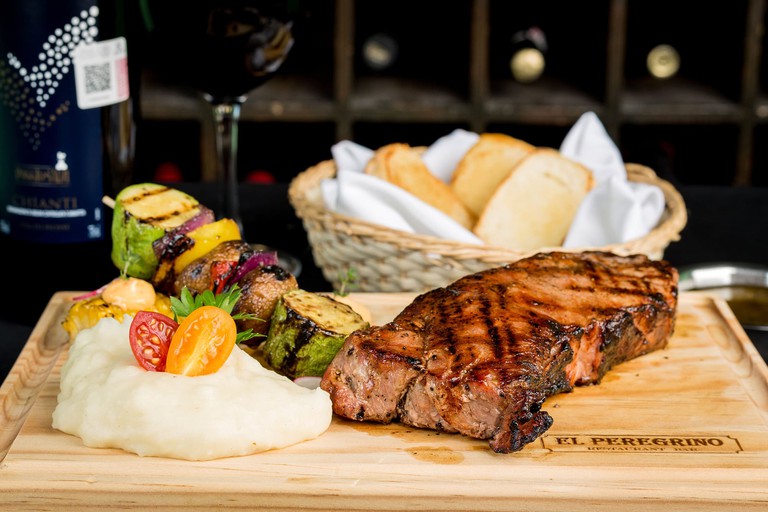 © El Peregrino
The cuisines of Mexico and Argentina shake hands on the menu at this little restaurant in downtown Cabo San Lucas. Guacamole features alongside empanadas on the starters list and dishes such as sizzling steak fajitas star in the entrees section. Dishes are served up on weighty wooden chopping boards and in cast iron skillets, and the wine list – largely rich Mexican and Argentinian reds – is chalked up on a blackboard. 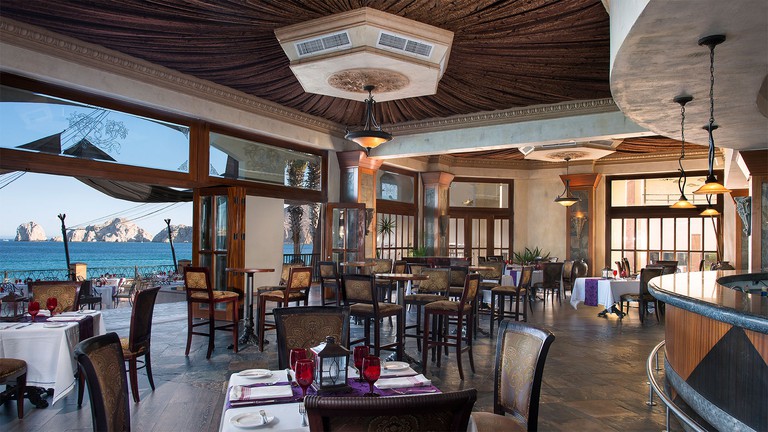 Despite being set on a downtown street, there’s a beach-hut look to Barracudas. It has a thatched roof, its walls are lagoon-blue and there are surf boards and drift wood all over. The menu revolves around fresh-from-the-boat seafood. Ceviche, fish tostadas and grilled fish dishes all feature, but the showstopper is barracodo – a coconut shell overflowing with prawns, octopus, scallops and a tomato and black salsa sauce.

Restaurant, Mexican
Facebook
Email
Twitter
Pinterest
Copy link
Share
With its gummy bear-bright paintwork and converted camper van bar, Wachinango’s, near the marina, is a playful place. The chef takes his food seriously, though. He has a smoker on-site, where meats such as ribs are slow cooked over mesquite wood for hours. Seafood dishes, such as whole grilled octopus and tuna-and-scallop towers, are also made fresh from the net. If you like your spice, you should wash your meal down with a jalapeño margarita. 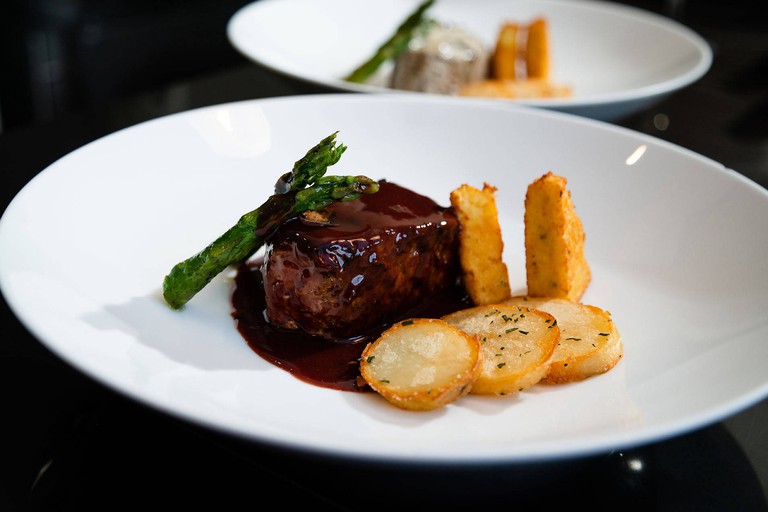 © Il Forno
Overseen by Milanese chef Luigi, Il Forno serves classic Italian food a few streets back from the beach. Home-made pasta, wood-fired pizzas and oven-baked fish are all part of the menu. For a little reminder that you’re in Cabo, go for the Why Not pizza that’s topped with jalapeños and local honey, as well as Italian sausage. The best seats are in the walled courtyard, where a fire pit keeps diners warm on cooler nights.

If you’re looking for somewhere different to stay while you’re here, why not book into one of the best luxury hotels in Cabo San Lucas? Or if you’d rather stay like a local, opt instead for authentic Mexican accommodation. For inspiration for your itinerary, there are plenty of things to do, including some incredibly beautiful beaches. Make your stay complete with knowledge of the best bars.