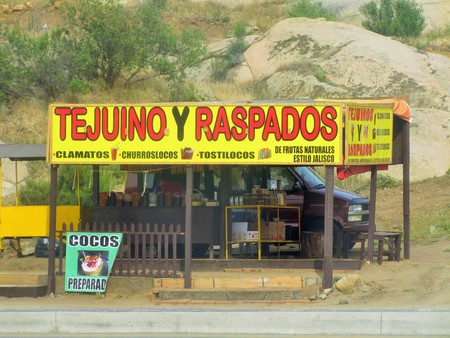 Corn is the essence and the soul of real Mexican food. It was domesticated around 10,000 years ago, in central Mexico, and at some point – no one knows exactly when – it was first mixed with water, and became tejuino. Ever since then, it’s been a vital part of the Mexican way of life.

During pre-Columbian times, the inevitable happened: this corn and water mixture fermented, and tenuino become an alcoholic beverage. This imbued the drink with a new, magical meaning: now, the same corn that fed the Mexican people also formed a bridge to the gods, that could be crossed during a mystical, alcohol-enriched experience. Nowadays, it’s still used in special ceremonies by some indigenous peoples of Mexico.

Tejuino became a kind of ancient corn beer that spread over all of Latin America. There are some variations, such as the famous atole, a hot corn beverage; pozol, which is corn mixed with cacao; or tejate, which is very well known in Oaxaca and is made from corn mixed with mamey. If you go even further to the south, you will come across api, a traditional Bolivian drink made with corn, which is very similar to tejuino.

The ancient drink later evolved to become the drink that is now known and loved by locals throughout Mexico. You can find a tejuino street stall in many towns all around the country.

One of the places where you will come across a traditional kind of tejuino is Guadalajara, the capital of the state of Jalisco, in Western Mexico. Here, the drink has a pinch of salt and some lemon juice, and is topped with handmade lemon ice cream.

Many people will find the tejuino flavor a little bitter, salty and thick. But give it a try, and think of all the history behind this really original drink. Do look for a very clean kiosk where the ingredients are handled with care.

If you are surprised by how much Mexicans love this unprepossessing beverage, remember that children have known the taste since they were young, so their palate is accustomed to this particular flavor.

There are many places where you will see tejuino sellers in Guadalajara, but particularly worthy of note are the Marcelino Tejuino y Garrafa and the Tejuino con Nieve.