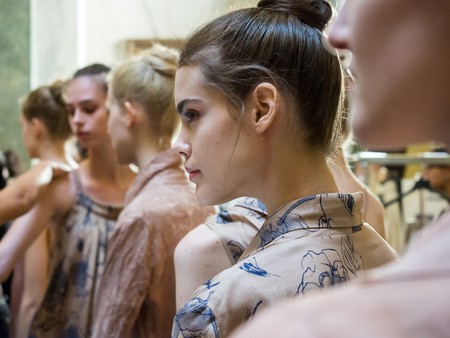 Pamela Ocampo is one of the most accomplished women on the Mexican fashion scene, having worked her way up through various big name publications – including Elle México and Harper’s Bazaar – before finally becoming editor-in-chief of L’Officiel México in late 2013. Basically, if you devour Mexico’s fashion mags, chances are that Pamela Ocampo has had something to do with them. Here’s everything you need to know about her.

Born in Mexico City, Ocampo always had an interest in fashion with a particular focus on magazines and photography. But before breaking into the fashion world, she studied for a Communications degree at Mexico’s prestigious private university, TEC de Monterrey. It was in fact that experience which allowed her to get her start in the industry, working as a PR maven for many big-name brands and discovering her talent for spotting new trends along the way.

Once she got her start in the industry, it didn’t take long for her editorial prowess to gain recognition, being named one of Reforma’s most talented young editors in Mexico way back in 2011. However, she herself acknowledges that it was actually during one of her first shoots for New York Fashion Week that she knew in her heart she was on the right career path, one that affords her day after day of unique experiences and no set routine.

In her role as fashion director with Harper’s Bazaar, she oversaw many notable editorial features, similar to her five-year stint at Elle México during which she produced hundreds of fashion-focused stories and worked with a range of models and designers.

However, it was in late 2013, with her appointment as editor-in-chief of French fashion editorial L’Officiel’s Mexico branch that she gained further press attention. Through this prestigious role, she hopes to promote the thriving Mexican fashion industry, promoting local designers and international tendencies through the pages, both digital and print, of L’Officiel, as well as raising the style consciousness and awareness of the country. She herself has stated that Mexico is nowhere near as fashion forward or as daring as renowned chic city Paris, or adventurous London.

As a recent interview with The Fancy Archive revealed, while she may not be able to choose between sea and snow, María Felix is her ultimate fashion icon and jeans are her go-to legwear of choice. She also recommends Sioux and Yakampot as fantastic fashion boutiques for anyone who visits in Mexico City, as well as museums such as the MUAC and Museo Tamayo, but champions Oaxaca as one of her favorite destinations in her beloved country.

If you want to check out more work from this woman making waves in Mexico City’s fashion scene, then her Coco Polone blog is the ideal place to start, alongside her Instagram.