Xaman focuses on "the power of plants, respect for nature, the importance of place as a catalyst for states of consciousness and music"

Bar-goers in Mexico City have the chance to mix small-batch spirits with shamanistic recipes at Xaman Bar.

Xaman bar, in Mexico City’s central Juárez distict, offers cocktails mixed with ingredients that have been used in medicine for centuries. 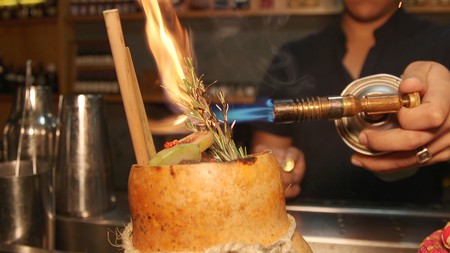 The power of plants

Xaman claims to offer a new experience, focused on “the power of plants, respect for nature, the importance of place as a catalyst for states of consciousness and music”. In its signature drinks, spirits like bourbon, mezcal and gin are mixed with the likes of xoconostle (prickly pear), lime juice, agave, wakame seaweed, refreshing manzano peppers and guava.

Herbs including rosemary, epazote (Mexican tea) and hoja santa (sacred leaf) are added. Some drinks feature copal, a resin associated with purification, which is set on fire so its smoke can be collected in a bell jar and inhaled.

Xaman Bar is at Copenhagen 6, tucked down a nondescript flight of stairs. There’s also music, craft beer and cheese-and-charcuterie boards for snacking.

The herbs used at the bar have roots in genuine Azetc practices. Plants were central to the empire’s medicine, and continue to be used by some Mexicans for everything from general cleansing to restoring energy and battling infections – some are even said to make you more intelligent. Markets offering traditional concoctions can be found across the country, and visitors can get an academic sense of Aztec botany at the Museum of Medicine in Mexico City.

Another popular practice is the temazcal, a sweat-lodge ritual combining hot rocks, herbs, chanting and prayers connected to the elements of earth, wind, fire and water. Initially associated with marriage, healing and preparing warriors for battle, today these sessions are popular with Mexicans and foreigners hoping for spiritual rebirth.

Other visitors seek out hallucinogenic substances including peyote and magic mushrooms, which are also used in ceremonies by shamans. All of which makes a herbal cocktail in a city bar seem like a blissfully easy way to explore the power of plants.