Mexico’s Weirdest but Most Wonderful Foods 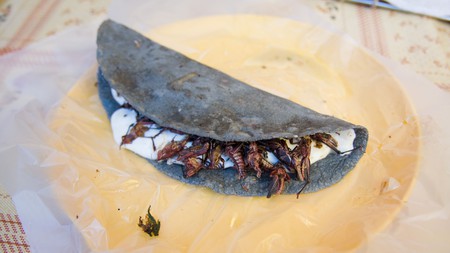 Its special combination of textures, flavors and spices saw authentic Mexican food designated an Intangible Cultural Heritage by Unesco in 2010. But some of the country’s cuisine takes a little getting used to, because there are plenty of unusual – even downright bizarre – dishes to be eaten across the country. Wouldn’t life be boring without a few surprises? Here’s a rundown of the nine strangest foods in Mexico. 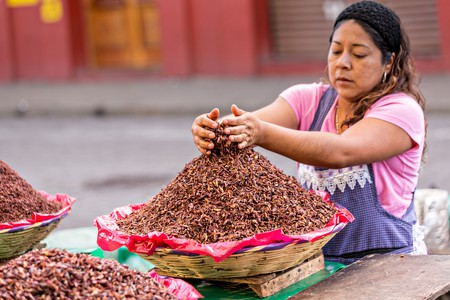 The city of Oaxaca is famed for its chapulines, or grasshoppers, which are typically fried in garlic, chili and lime. Initially, the thought of consuming grasshoppers may make even the strongest of stomachs turn, but a surprising number of tourists rapidly acquire a taste for them, which begs the question: do they have an addictive property?

The crunchy critters are served in markets across southern Mexico, as well as in a select few traditional markets in Mexico City. Give them a go. You might just join the increasing list of brave foodies who consider them delicious, and at least you don’t have to catch them first.

This sublime delicacy has been consumed in Mexico since the time of the Aztecs and is still a popular treat, especially in Mexico City markets. Yet escamoles are not for the faint-hearted foodie – they are made from the edible larvae and pupae of ants, most notably the Liometopum apiculatum species.

Often harvested from the roots of the tequila and mezcal-producing agave plant, escamoles are surprisingly delicious. The delicacy is typically served in a taco, or al mojo de ajo (fried in garlic). Escamoles are a quintessential Mexican culinary oddity, and should be sampled at least once… if only to prove you’re not a squeamish gringo.

Yes, you read that right. Flying ant salsa isn’t fictitious and is, in fact, a traditional delicacy in the state of Oaxaca. Every spring, after the first rains, flying ants – or chicatanas – swarm Oaxaca City. Many locals catch the insects and use them to make a variety of foods, including a spicy, garlic-heavy salsa. The ants are apparently highly nutritious, and even children love to catch them.

The uniqueness of the dish and its limited availability means that chicatanas have become a delicacy, served in some of Mexico’s best restaurants, such as Restaurante Casa Oaxaca and Mexico City’s Pujol. 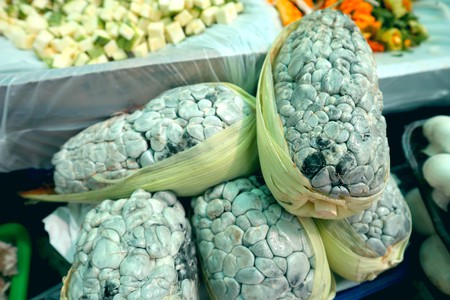 Known in English as “corn smut” – and technically a plant disease – you’d be forgiven for passing on an offer to sample huitlacoche. Yet in Mexico, the dish is regarded as a delicacy and is a popular addition to soups and quesadillas (melted cheese in folded tortillas).

Huitlacoche is a fungus that grows on the corn plant. While infected crops in the USA are typically destroyed, in Mexico, corn smut is collected and sold for a higher price than uninfected corn. Perhaps its alternative name, Mexican truffle, will win over those with a weak stomach and a love of words.

If you buy a shot of mezcal in the southern states of Mexico, there is a good chance you’ll be offered a fresh slice of orange and sal de gusano (worm salt) to help wash it down. In fact, the salt is made from the larva of a moth, rather than a worm.

Consumed as a snack since pre-Hispanic times, the larvae live in the agave plant and consume its nectar. Worm salt is made by collecting these larvae and crushing them with rock salt and dried chillies. Downing a shot of firewater just got even more bizarre.

It’s a fact that most ingredients can taste pretty decent in a taco. Mexicans would agree with this, as their globally recognised dish is enjoyed by hundreds of millions of hungry souls every year. Though a taco de lengua is delicious, its raw ingredient may not be for everyone. Lengua is cow tongue, and before cooked, it resembles… well, let’s say it ain’t pretty.

Cow tongues have a high fat content and are usually overlooked as offal. Nevertheless, put it in a taco (or burrito), add some seasoning, and it passes as a surprisingly tasty snack. If you’re treating someone who’s squeamish, simply tell them it’s beef, which is not strictly a lie. 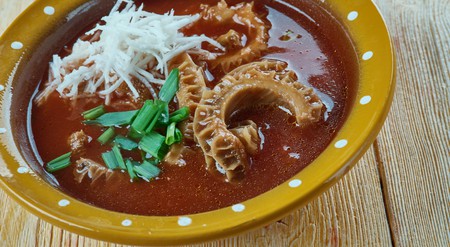 If you’re a vegetarian, vegan or someone who usually opts for the house soup without asking what flavor it is, this is one to avoid. However, for the more daring diners out there, menudo soup is an inspirational choice. Put simply, the dish is a slow-cooked broth with a red chili base, often seasoned with oregano, lime, onions and hominy (maize kernels). Sounds pretty good, right?

But we haven’t yet revealed the star of the show yet: the broth’s main ingredient, tripe, or cow’s stomach. So, that explains its alternative name, mole de panza (stomach sauce). Apparently, it’s a known cure for hangovers… if you can stomach it.

On menus throughout Mexico, you’ll find a quirky (or spiky) dessert called cactus-flower ice cream, which is sometimes referred to as prickly pear ice cream. The core ingredient is usually obtained from the fruit of the Opuntia tuna cactus (no flowers involved), but don’t be put off by the fishy name.

Wonderfully weird, the sorbet is labelled nieve de tuna (snow of tuna) and is rightly celebrated as a Mexican culinary institution. An added bonus: a stray cactus spine also makes a useful toothpick.

Take a deep breath. OK, all done? Unless you’re an arachnophobe, get your spidey senses tingling with this tasty delicacy. Hang on… tasty? That’s surely a matter of opinion. But there are many who insist that this family of hairy spiders have delicate white meat that isn’t as harsh on the palate as eating a large venomous arachnid would suggest.

We recommend trying them at an authentic Mexican street-food stand, popping them in your mouth without a second thought. If you decide that tarantula is a step too far in your Mexican culinary exploits, there’s always tequila available to vanquish the taste – and memory.