Memorable Experiences You Can Only Have in Mexico City 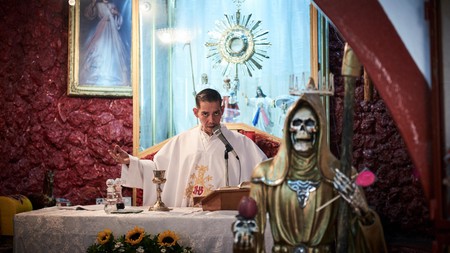 Mexico City’s sheer size calls for mariachi-style enthusiasm, with a foot-stomping selection of activities and attractions – including unique diversions found here and only here. In fact, the New York Times crowned the city a “metropolis that has it all”. We couldn’t agree more. She may be called La Ciudad de los Palacios (the City of Palaces), but she’s certainly no square – especially with our guide to her alternative corners, from the creepy Isla de las Muñecas to the weird Mercado de Sonora.

Looking for a boutique experience? Then book Culture Trip’s five-day Mexico City tour, where you’ll be guided through the best the city has to offer by our Local Insider. 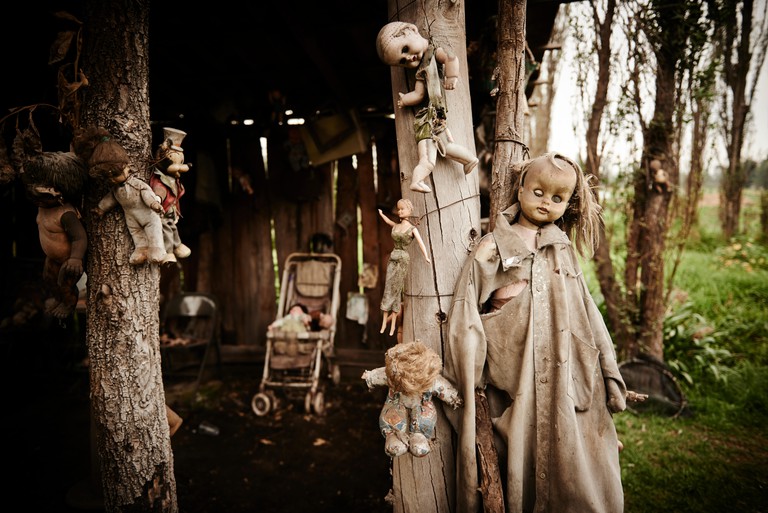 © Christina Simons / Alamy Stock Photo
The Isla de las Muñecas (Island of the Dolls) sits in a secluded section of Lake Xochimilco in Mexico City and is one of the world’s creepiest spots. Dozens of vacant-eyed plastic dolls dangle from the island’s trees; many are tinged brown or green, some have missing limbs, and one has eyes painted blood-red. This nightmarish destination was formerly the home of a hermit called Don Julian Santana Barrera. According to local legend, he found the drowned body of a little girl in the lake. Haunted by the memory, he began to collect discarded dolls from the lake and hang them from trees. After Julian’s death in 2001, the island became a tourist attraction, with some visitors claiming to have seen the dolls open their eyes or move their limbs. Creepy much?

Pay for an electric shock

Archaeological site
Facebook
Email
Twitter
Pinterest
Copy link
Share
One of the most surreal sights in Mexico City is the game of toques, where people on a night out hang on to metal bars and get electrocuted… seemingly for fun. Shocking, right? The drinking game is a brazen display of machismo – the more alcohol you imbibe, the more voltage you can generally endure (120 volts is the usual maximum). A game of toques typically costs 20 Mexican pesos ($1) and is popular in the nightlife hubs of Roma and Condesa and around the Plaza Garibaldi.

Explore the house where Leon Trotsky was murdered

Building, Architectural Landmark, Museum
Facebook
Email
Twitter
Pinterest
Copy link
Share
The Russian revolutionary Leon Trotsky lived his last years in exile in Mexico City until Ramón Mercader, a Stalinist agent, assassinated him by plunging an ice pick into his skull in 1940. The house where Trotsky lived is now open to the public as a museum, and its walls are still riddled with the bullet holes left by a first (unsuccessful) assassination attempt, also in 1940, led by the muralist David Alfaro Siqueiros. When Trotsky arrived in Mexico in 1936, he stayed with the artists Diego Rivera and Frida Kahlo at their house down the road. Later, Rivera expelled Trotsky when he discovered the Russian’s affair with Kahlo, and he moved to this house.

With rooms preserved as they were the day of Trotsky’s death – and a tomb in the garden containing his ashes – the museum now offers an intriguing glimpse into one of the most bizarre moments in 20th-century Mexican history.

Visit the cathedral of Lucha Libre 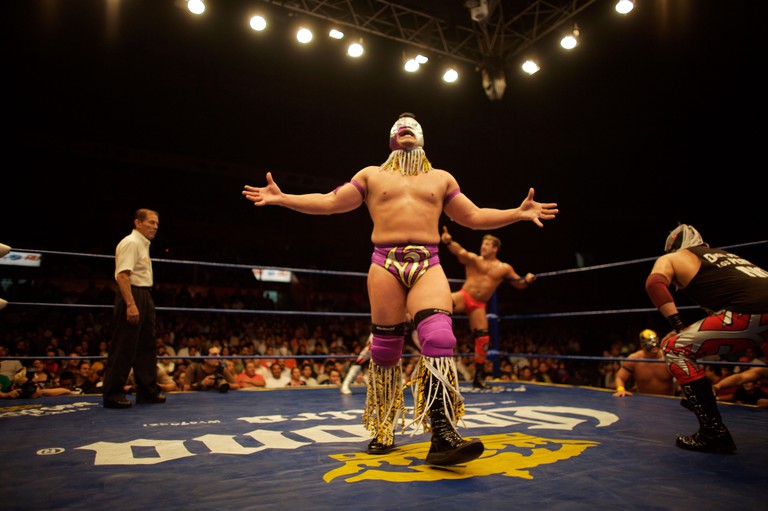 © Anne Lewis / Alamy Stock Photo
Mexican pro wrestling, or lucha libre (free fight), is a must-see spectacle for visitors to Mexico City. With a capacity of 16,500, the Arena Mexico is the largest lucha venue in the world and is unmatched for pure, unadulterated weirdness. Every weekend, devoted wrestling fans flock to the stadium to catch fights featuring superstars such as Blue Panther Jr and Loco Max. While lucha libre fights are staged, and the winners usually predetermined, the acrobatics on display are impressive in their own right. A lucha libre event will typically feature three or four wrestling bouts and a sublime carnival atmosphere.

Visit the church of Saint Death

Church, Shrine
Facebook
Email
Twitter
Pinterest
Copy link
Share
The divine skeleton Santa Muerte, or Saint Death, is a Mexican folk saint that is typically depicted in a bridal dress, holding a scythe in one hand and a globe in the other. The cult of its worship has been described by religion expert Andrew Chesnut as the fastest-growing devotion in the Americas, and has taken a particular hold among the country’s poor and marginalized citizens. Although altars are typically confined to the homes of devotees, Mexico City authorities have permitted the construction of a church dedicated to the saint, the Santuario Nacional del Angel de la Santa Muerte.

Mass is celebrated in the Santuario six days a week, despite the fact that the devotion has been condemned as satanic by the Catholic Church. Baptisms, confirmations, first communions and even weddings are also held here.

Head to the Biblioteca Vasconcelos

Bookworms taking in the sights of the capital should make a stop at the Biblioteca Vasconcelos, next to the Buenavista train station, north of the city center. The “mega library” was inaugurated in 2006 by then-president Vicente Fox Quesada, with 600,000 books classified through the Dewey Decimal System. The architecture – a modern mix of marble, granite, steel and glass by Mexican architect Alberto Kalach – is worth seeking out for its sleek design alone.

Non-bookworms, take note: there’s also a large garden showcasing 60,000 species of trees and shrubs – the perfect inner-city oasis to catch your breath and plot your next move.

Lose yourself in the Chapultepec Forest 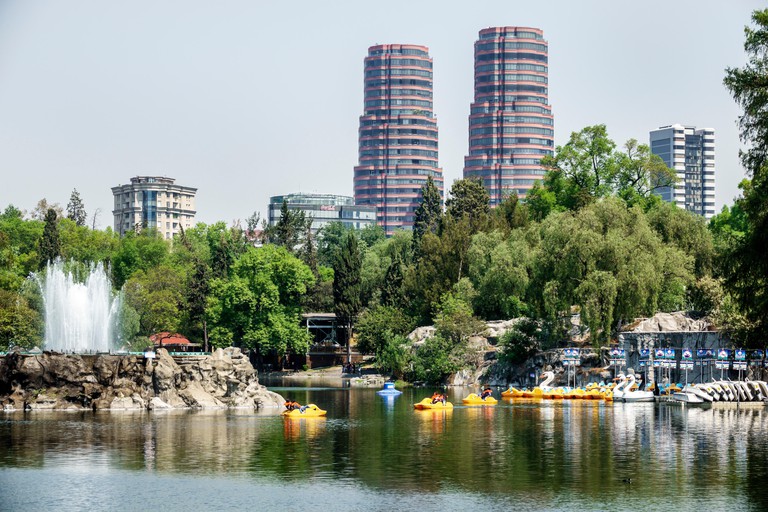 © RosaIreneBetancourt 10 / Alamy Stock Photo
Twice the size of New York’s Central Park, Chapultepec is one of the largest urban parks in the Western Hemisphere at roughly 1,700 acres (686ha). The park is just a short taxi ride from the city’s main Plaza del Zócalo and is divided into three sections, each with their own character and attractions. This really is a full-day event, so organize your trip accordingly. Within its leafy confines, you’ll find a fantastic zoo, which houses jaguars and Mexican wolves among its 240 species, plus a botanical garden, eight museums and relaxing corners with lakes and fountains in which to put your feet up.

Indulge at the Pastelería Ideal

Shop
Facebook
Email
Twitter
Pinterest
Copy link
Share
Bear with us – this is no ordinary cake shop. In fact, the Pastelería Ideal is one of the most well-known shops in the capital, famous for its exhibitions of all things sweet. Founded in 1927, the bakery entices curious visitors with their lavish collection of pastries, jellies, breads and savory treats. What makes this bakery memorable? The icing on the cake is the remarkable cake exhibition, with hundreds of extravagant, multi-tiered exhibits on display. Plus on the way out, you can pick up boxes of conchas (a traditional Mexican sweet-bread roll) and pan danés (fruit-filled danishes) to refuel on while sauntering through the city.

Wander through the Mercado de Sonora

Obligatory for those with an inquisitive nature and a taste for the occult, the Mercado de Sonora is a huge market in the Merced Balbuena neighborhood. Ditch a traditional shopping list and pore over some of the strangest items on offer in the capital. Obscurity is the name of the game here, so the locals don’t bat an eyelid when bartering for love potions, magic soaps or anything connected with voodoo. They also sell a vast range of food and dried reptiles, if that’s your thing. Take a whole afternoon to explore the weird, the wonderful and the downright creepy.