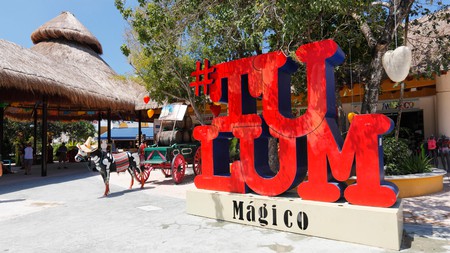 Fifteen years ago, Tulum was a small roadside pit stop with a few taco joints and a gas station. It has since grown into a large urban center, but amidst the chaos of construction projects and the never-ending development of new buildings, TINASAH – a collective of muralists – is transforming the urban landscape with its art.

Tulum has long attracted artists from all over Mexico and across the world, but a few years ago creatives started getting together, painting in the streets and organising cultural events. Valeria Navarrete, José Arnulfo Munive Sánchez and Emma Rubens, long-time Tulum residents who are among TINASAH’s core members, say that bit by bit the scene grew, becoming more defined and transforming into a movement of muralism.

The size of the collective constantly fluctuates, however, as members include those living in the town as well as visiting muralists.

“A lot of artists come [to Tulum] from within the muralist world and it’s based on connections – a lot of people end up coming here because they had friends who already came and painted a wall,” says Navarrete, a Mexico City native who has lived in the town for a decade. “It’s a number that’s constantly growing and we’re making murals with people from all over the world.”

Full of energy and drive, the collective is involved in different local projects. These include art sessions with children from a nearby Mayan community, helping with the regeneration of a street known as Sendero Verde (‘Green Path’), and the creation of Festival Arte TINASAH (FAT).

“We love celebrating muralism and street art… We were all excited about what projects we could do [with TINASAH],” says Rubens, who is originally from the UK but has lived in Tulum for 13 years. “I think it came up because we went out and we wanted to paint, so we were looking at walls to paint, and we were all like, ‘Okay, let’s do a festival’.”

So they wrote a plan, found walls to paint and began inviting artists to participate. However, there were two aspects important to the festival. Firstly, the collective encouraged the participation of local artists, and secondly, it wanted all muralists to be paid for their work. To achieve this, TINASAH sought sponsorship from local businesses and the response, it says, was incredible.

“It was just so impressive, the response we got from everybody,” says Navarrete “It’s important in the sense that the community participated in this process of making the town look nicer. They got involved and could see the value in it.”

Choosing where to paint

Working as a collective, the muralists have shared values and goals. As individual artists, however, they have very different influences and approaches to their work. This includes what each artist looks for in a wall, which is something of an obsession for muralists. Rubens jokes that rather than “checking out the talent,” she and Navarrete are “always checking out walls.”

Munive, who is originally from the Mexican state of Puebla, explains that when choosing where to paint, muralists will take into account aspects such as whether a wall has an interesting architectural composition, whether the wall is smooth, or if it’s in a position where the majority of the public can see it. “I think it depends, because most of us have many ideas. We have an archive of ideas with possibilities for different designs,” he adds.

Powerlines and other obstacles are another consideration. During last year’s festival, Navarrete painted the mural Agua (‘Water’), which incorporates part of a rooftop pool. But because of the positioning of the powerlines, this mural was no easy feat – at one point she had to climb into the water in order to paint parts of the exterior wall below.

The logistical challenges notwithstanding, Navarrete says she thought it was “a really beautiful wall, and the detail of the swimming pool was amazing to play with.”

“I just came up with the idea and the owner [of the building] really liked it. I like portraying nature, and I try to be joyful with it. That’s a way I think we can put a nice seed into the world,” she explains.

Her mural El Pajarito (‘The Little Bird’), which was also painted as part of last year’s festival, depicts an old Mayan man who has “lived in Tulum forever.”

“He walks around with a cart recycling rubbish and I wanted to give him a voice; a representation,” Rubens says. “What I love about street art is that it’s so inclusive. And what I personally love is representing the people from Tulum on its walls. It’s a very personal touch for them, to be walking down the street and see themselves in the town where they live.”

Munive’s art combines both social themes with representations of nature. His 2019 FAT mural is called Somos Vida (‘We Are Life’). The painting depicts the face of a local woman who is looking in the direction of Tulum’s town hall. The position of this wall was important, explains Munive, and there is an “aspect of disbelief” because the woman’s expression seems to be questioning something that is happening. The face has been painted in the form of small intricate leaves and is juxtaposed with a real tree. This, Munive says, is a way of expressing that we are always part of nature.

The beauty of muralism, for Munive, is the ability to transform public space and express ideas. “I like being able to communicate concepts that I think we should take into consideration for the development as human beings.”

Unfortunately, Munive’s 2019 festival mural was painted over despite agreeing on the design with the building’s owner. This is an occupational hazard. However, the trio explain that for FAT 2020 they have permission to paint on the walls of some of the government buildings, which will give the murals greater protection.

While their art may differ, the muralists all agree that a key aspect of street art is its inclusivity. “It doesn’t matter if you’re rich or poor, you don’t have to pay for it,” says Rubens. “It’s there for you to enjoy.”

TINASAH’s work in Tulum is grounded in a shared belief that street art is about making change happen and creating murals for the community in Tulum that have a positive cultural and political influence.

“As a movement we were united to see if we could make a good team, to see what we could do and there are many possibilities,” says Navarrete. “The possibilities are exponential if we have a common goal. So let’s see what happens.”