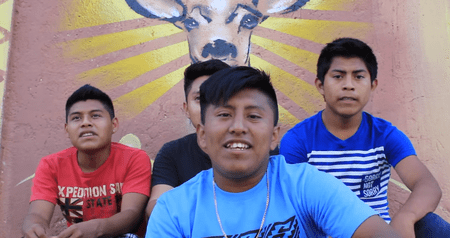 Mexican rappers in the state of Quintana Roo are revitalizing their indigenous roots through rap, breathing new life into indigenous languages as they rhyme in their native tongue, Maya.

The Tihorappers crew are formed of, according to their Facebook page, six singers in their late-teens/early twenties – one producer, two linguists, one audio-visual producer and one graphic designer, From Tihosuco, Quintana Roo, they rap about everyday life in the Yucatán and their take on the situation in Mexico.

Their aim is to promote and preserve their native Maya culture and language (which has some 800,000 first language speakers in Mexico) through music, and they definitely have social media to thank for helping them break out of their local performance circuit and gain global recognition. 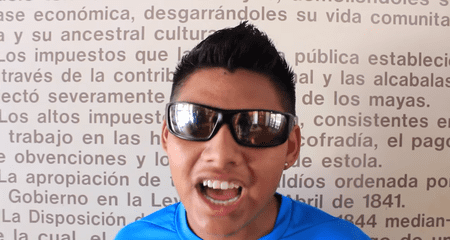 Back in May 2016, the video for the MC Chama song ‘Estoy contento’, which mixes Spanish and Maya lyrics, went viral just hours after being uploaded, and was picked up on by media outlets around the world. While the official Tihorappers video for ‘Estoy contento’ now shows around 35,000 views, reports at the time put the view count at over two million. Either way, it seems highly appropriate that the song which went viral is all about taking pride in your roots, given their desire to promote the preservation of Maya.

‘Estoy contento’ isn’t the only Tihorappers Crew song worth a listen though, as the Jona and Creazy-led track ‘Lucha por tus sueños’ is also a fantastic example of their Spanish-Maya combo lyrics.

However, Tihorappers Crew aren’t the only Mexican group reclaiming indigenous languages and culture by means of modern day endeavors; the Oaxacan-based group Juchirap – who have achieved some radio success in Mexico – rap in Zapotec, whereas San Juan Chamula-based rock band Vayijel sing in Tzotzil, a language used by around 400,000 native speakers among indigenous communities in Chiapas.

In fact, Tihorappers aren’t even the only rappers using Maya in their music, as 22-year-old Pat Boy (who already has three albums under his belt) is also gaining recognition for his tracks, particularly ‘U kuxtáal mayaoob’ (which talks about everyday life in Mayan villages) from his first album Ya’ax xin baal. He claims that rapping in Maya helps him better understand his own culture.

This reclaiming of indigenous tongues is by no means unique to Mexico either, as Colombian sibling duo Brayan and Dario Tascón of Linaje Originarios rap in their native Emberá, an endangered language spoken by around 80,000 Colombians and Panamanians. Their goal is to get kids interested in learning about their language and culture, thus preserving it for future generations.

Then you have L.A. Native American duo LightningCloud, made up of Red Cloud (who has roots in the Huicholes of Jalisco, Mexico) and Crystle Lightning, a Canadian First Nations Enoch Cree. Ultimately, Mexico’s Mayan rappers are just one in a long line of artists preserving their culture and language through hip-hop. Here’s hoping they won’t be the last.