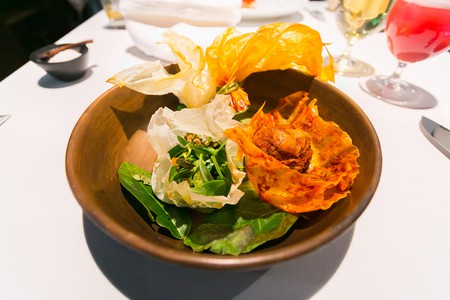 Chef Enrique Olvera has made his mark upon the culinary world for his contemporary takes on the traditional foods of his home country. At his two flagship restaurants—Pujol in Mexico City and Cosme in New York—he cooks high-end versions of the dishes of his homeland. He’s currently on the eve of opening Atla, his newest restaurant in New York City, to expected acclaim: After all, he’s easily the most famous Mexican chef in the world. To achieve that stature, though, he had to fight widespread assumptions—including his own—about what Mexican food was and should be.

Both of his flagship restaurants are currently ranked among the world’s 50 best. Unlike at most other fine-dining establishments on that list, however, when you visit Olvera’s restaurants you’ll likely find yourself eating gourmet versions of Mexican street foods, tacos and tamales. You’ll almost certainly eat with your hands at some point in your meal. But while the presentations may seem simple, the flavors are anything but; stunningly multilayered and complex, they showcase the extraordinary diversity of Mexican ingredients and flavors. Olvera constantly seeks out indigenous ingredients, like some of the 100 spices that go into his famed mole sauce.

While in high school, Olvera started cooking for the woman who would later become his wife, and then he started cooking for his friends. A series of weekend dinners he threw for his friends gained such a reputation that his friends’ parents began attending them. Even though cooking was then considered a lower-class job, he knew he wanted to become a chef. His idols were New York-based chefs like Jean-Georges Vongerichten and Daniel Boulud, so he looked at cooking schools in New York, ending up at the Culinary Institute of America, where he thrived.

Soon after graduation, he felt ready to open his own restaurant. He went back home and started cooking dinners for his parents’ friends, telling them he wanted to open his own place; they became his earliest investors. He opened Pujol in 2000… to minimal interest. He was on the verge of failing and closing the restaurant when he realized he was taking it too seriously; he’d initially started cooking because it was fun, and he’d somehow lost that. “I was too obsessed with trying to produce really high-quality food, and I forgot about having fun,” Olvera says on Chef’s Table. “I think that Mexicans love to have a good time, and if you’re going to have a restaurant in Mexico, you need to be a reflection of that, of people having fun, being laid-back and enjoying life, and enjoying cooking as much as you enjoy eating.” Things then started turning around.

Soon, Pujol was becoming known as one of the best restaurants in Mexico, yet Olvera felt disconnected. He felt that he was essentially doing the Mexican version of New American cuisine, using Mexican ingredients but not to make Mexican food. He resolved to start cooking more authentically, to start making the Mexican foods he enjoyed eating most: tacos and tamales and moles. “Why did I have a restaurant that was not serving that kind of food?” he asked himself. He realized he wanted to be creative, but also needed to stay true to himself and to his culture. It wasn’t easy convincing diners he could do both, however. There had never been a fine-dining restaurant in Mexico City that served Mexican food. Nor anywhere else in the world, for that matter.

He began to visit Oaxaca often; it’s a region with a diversity of cuisines, and he became inspired by the ingredients and how he could use them in a unique way that would still preserve the culture. He also started cooking from his own references. Dishes like lobster tacos, cobia al pastor, and churros began to find their way onto his menus. Olvera recalled that in his family, food was used as a reward when he was a child. He always requested a traditional dish of octopus cooked in a stew in its own ink for his birthday; he began serving a variation on that dish at Cosme. “The beautiful moments from my childhood, they end up showing up on the menu in some way or form,” he says on Chef’s Table. “People come to the restaurant to celebrate, so it makes sense to have a dish that makes me happy.”

Similarly, even though he’s creating high-end cuisine and, at Pujol, offering multi-course tasting menus, Olvera says he wants his restaurants to be more approachable than most high-end fine-dining spots; he wants them to be places that people return to often. “Pujol is how I picture Mexico City, and how I want people to experience Mexico,” he tells Food Arts. “It’s not nostalgic, it’s a little bit loud, a little bit of a mess, very Mexican.” The original goal for Cosme was for it to be relatively casual, with most dishes priced below $20. Prices there have crept up quickly; perhaps Atla will end up being the casual neighborhood spot Cosme was intended to be.

The corn husk meringue dessert served at Cosme is the restaurant’s best-known dish: A sweet corn mousse pouring out of a meringue that’s been cracked open; its flavor is the very essence of corn. It’s appeared in countless Instagram photos and continues to appear on lists of NYC’s best desserts.

At Pujol, the most iconic dish is his mole madre. It’s simply a circle of mole on a plate, meant to be swiped up with a tamale. In this case, though, the mole is aged for nearly 1000 days, and served with a dollop of younger mole in the center, like a bulls-eye, allowing the flavors to complement and contrast with each other. “It was really surprising to get the main course in a restaurant like this and it’s just basically a sauce,” chef Daniel Humm, of Eleven Madison Park, said on Chef’s Table. “Imagine that the sauce is not seasoned perfectly, or something is off with that sauce. That’s all there is on the plate. At that time you really know there is a chef behind it who is very confident, who really knows what he is doing.”

And yet, to Olvera, it makes perfect sense. “In Mexico, we grow up eating the mole,” he said on Chef’s Table. “It is central to Mexican cuisine. If you’re celebrating something, then you’re having mole. Mole is chaos. There’s ingredients from almost everywhere in the world, and when you put them together, it makes sense: they become Mexican for some magical reason. And I think that summarizes Mexico.

“I want Mexican food to keep moving,” he tells CNN. “I understand that we have beautiful traditions. I feel very proud of those traditions, but I want to keep on building new traditions for the next generations.”