La Pasita: The Most Famous Bar in Puebla, Mexico 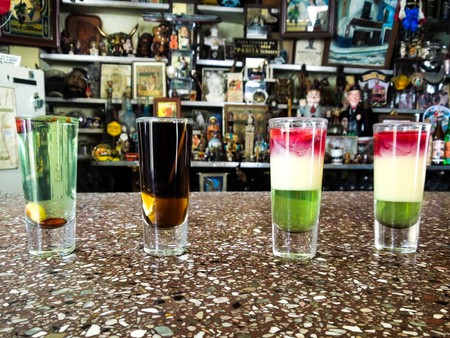 Raisin and other liqueurs are served at La Pasita | © Martina Žoldoš

Goat cheese and raisins in a drink? You won’t find this bar anywhere else.

Puebla is one of the most important and attractive cities in Mexico. Its historical center was named a UNESCO World Heritage site for its remarkable colonial architecture. It contains the biggest cathedral in all of Latin America, the first public library in colonial Mexico called Biblioteca Palafoxiana, and, of course, some famous mole poblano and chiles en nogada that attract thousands of tourists every year. However, there’s a local saying that to some extent minimizes the importance of all these historic sites and gastronomy: “If you haven’t been to La Pasita, you don’t really know Puebla.”

More than a century old

La Pasita, located in the central neighborhood of Los Sapos, is one of the oldest and most famous canteens in Puebla. It was inaugurated in 1916 by Emilio Contreras Aicardo, whose son is the current owner, and they have been attending to clients for more than 60 years. The place was originally a grocery store named El Gallo del Oro, but a few months after its opening, the owner decided to turn it into a liqueur bar. He invented a drink that gave the establishment its current name: pasita – a sweet liqueur made of raisins, served in a caballito (tequila glass), and decorated with a cube of fresh goat cheese and a raisin stuck on a toothpick. 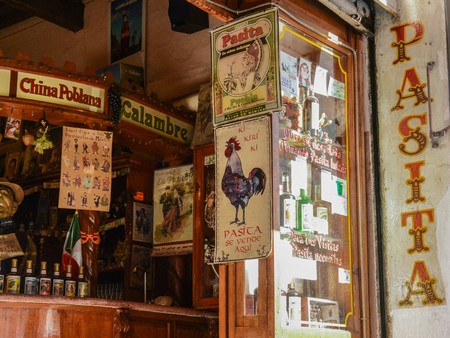 The star of the bar, pasita, was invented more than a century ago. | © Martina Žoldoš

There are several reasons why the tiny bar without tables and chairs became a popular meeting point. One of them was a competition that encouraged clients to drink 100 cups of pasita. The person up to the challenge would get 1,000 pesos and a blank bill for life. According to the owner, only one person has managed to win the prize in more than a hundred years. Unfortunately, the winner wasn’t able to collect it. Locals say that his wish was to be buried in the bar if he didn’t survive the competition – and his desire has been respected. Today, there’s still a worn and faded sign inviting others to try to break the record.

Another reason why the bar became famous is its particular way of serving the pasita. Legend has it that bartenders served a specific amount of pasita according to the number of blocks the client could walk after having the drink without falling over and passing out. So, regular customers who already knew their capacity would order: “Pasita for three blocks, please.” 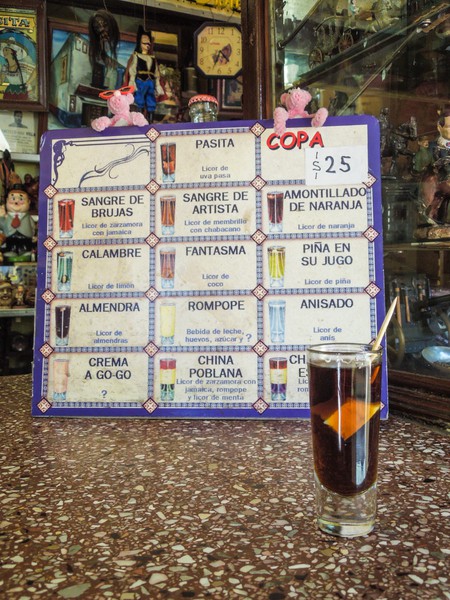 Pasita is the indisputable star of the bar; nonetheless, there are several uniquely named drinks that can make drinkers dizzy: Sangre de Brujas (Witches’ Blood), made of blackberry and hibiscus liqueur; Sangre de Artista (Artist’s Blood), made of quince and apricot liqueur; China Poblana, made of blackberry, hibiscus, egg and mint liqueur; Charro con Espuelas (Cowboy with Spurs), made of hawthorn berries, egg liqueur and cacao cream. Some others include almond, orange, pineapple, anise, coconut and lemon liqueurs.

La Pasita also distinguishes itself from other bars through its furnishings and decoration. The owner filled the rustic shelves with miniature objects and trinkets that he brought back from his trips both nationally and overseas. Among the collection are a brush that painted the Red Sea, the grenade that wounded Mexican president Álvaro Obregón, a rainbow arrow, foreign bills, stamps, small statues of Mexican generals, black and white photographs of Puebla, drawings of women from the ’30s, chipped bottles, and many other Carabinas de don Ambrosio – useless items or objects that no longer function according to their original purpose.

Without a doubt, La Pasita is widely renowned in Puebla. Common phrases like, “So as to not get sick, drink pasita frequently,” “Every good Mexican takes pasita in his hand,” and “To triumph in love, drink pasita, sir,” persuading visitors of the importance of pasita.