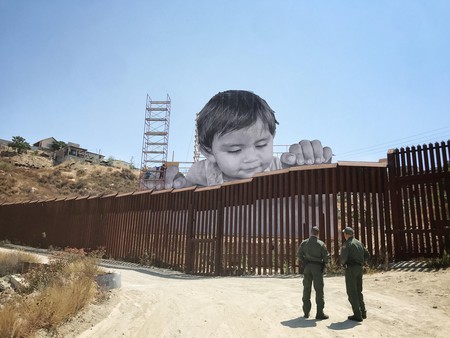 The French street artist has installed a giant paste-up of a one-year old Mexican boy peering over the US border wall in Tecate, a small city in Mexico.

Known for his ginormous black-and-white photographic installations that explore freedom and identity, JR’s latest work – his first in Mexico – rises 70 feet up over the United States-Mexico border wall.

Only fully visible from the American side in San Diego County, JR’s as yet untitled project draws attention to the ongoing rife abound the US-Mexico border wall from the ingenious perspective of a child; a child who doesn’t see, much less understand the concept of territorial borders.

The little boy, who is curiously peeking over the current border partition, lives in Tecate with his mother, who gave JR permission to install his work on her land. The French artist got the idea for the work in a dream. Past works have involved pasting his impactful imagery directly onto walls, like his Face 2 Face project on the Israeli West Bank barrier, but here he wanted to highlight the ridiculousness of the border wall by creating something bigger than it.

There has been much contention over the border due to President Trump’s persistence at building a ‘wall’. Many artists and architects have responded; one poignant interpretation came from a group of Mexican architecture interns to create a giant pink wall in homage to Luis Barragán.

Meet Kikito, he turned 1 year old last April. The piece is visible close to the Tecate border for a month. Check it out (link to the location in my bio)

JR’s piece also comes at a time when Attorney General Jeff Sessions announced the President will implement a wind-down of the Obama-era program, Deferred Action for Childhood Arrival (DACA).

Hopefully works such as JR’s will spotlight a much-needed new approach to the immigration issues not only in the US but around the world.

To visit the installation, follow this map link to the exact location.