In Mexico, Street Vendors Offer Electric Shocks for a Price

One of the weirdest things you’ll see on a night out in Mexico City is the game of “toques,” where people clutch two metal bars and allow themselves to be electrocuted, just for fun. The goal is to keep hold of the positive and negatively charged handles as long as you can while the current is gradually increased up to a maximum of 120 volts.

Around 20 volts is enough to cause tingling in your hands, and more than 60 volts triggers cramps in the arms and wrists. The game really gets going at around the 80-volt mark. Beyond that point, you can no longer move your arms or let go of the metal handles. Instead, your only way out is to shout “Ya!” (enough). Few people reach the maximum level. 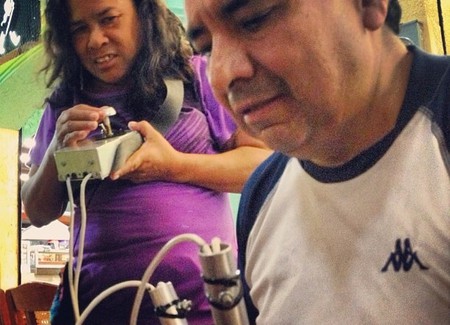 The game usually costs MXN$20 (US$1) and is particularly popular in the nightlife districts of Condesa and Roma and around the Plaza Garibaldi, the historic square that is famed for its mariachi performers.

Toques vendors carry the electrical box tucked into a small briefcase. You can hear them offering the game to passersby by clicking together the two metal handles that connect to the box via cables.

The game is a real Mexico City tradition and evolved in the cantinas of the past century. Despite the shaking and screaming, the game is not dangerous, although it is probably best avoided by anyone with heart problems or a particularly nervous disposition.

As well as individual challenges between friends, groups can take part in a bizarre bonding session by holding hands to form a human chain. The group has to withstand as much electrical current as possible before someone breaks the link. The person who does so is often subjected to a punishment – which usually takes the form of a tequila shot. David Beckham took part in this version of the game on his 2015 visit to Mexico City. The former soccer star was photographed participating in what looked like a séance at a restaurant in the stylish neighborhood of Polanco. In fact, Beckham was stoically enduring the electrical current surging through his group of friends.