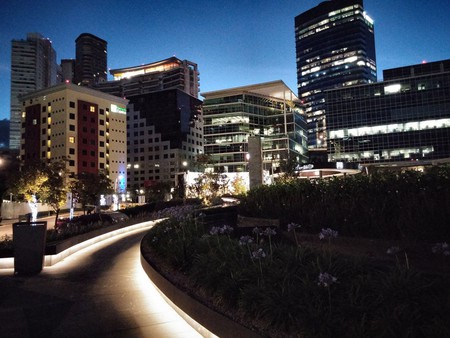 Santa Fe might be a shining expression of modernism, growth, and the financial capital that flows freely into Mexico City from across the globe. Or it could be a poorly planned bourgeois enclave that threatens the very essence of what makes Mexico’s capital city vibrant and wild. Or is it both? 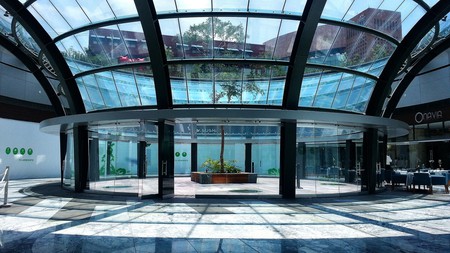 Home to three college campuses, the city’s seven-floor underground mall, and lines and lines of commuter traffic, the Colonia Santa Fe on the western edge of Mexico City is hard to define. For most tourists, and many locals, the neighborhood is a pass-through on the way to somewhere else, or the place you get stuck in a traffic jam, or the destination of your Sunday afternoon shopping outing. For those that live here, Santa Fe is home, and a gleaming financial center of Mexico City, with international companies like Nissan, Office Depot, and BP all headquartered here. 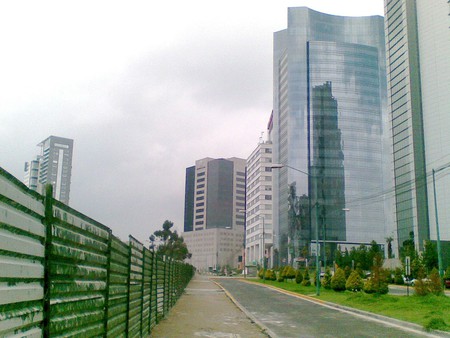 Because the Colonia was built with cars in mind, using your legs as transportation is not really an option. However, if you want to wander among the sky-rise apartments and high-end boutiques, there are plazas reminiscent of movie sets that lead you from one modern installation to the next. It’s a place people love or hate, or perhaps love to hate. And yet no one can deny that its futuristic skyscrapers give Mexico City one of its only chunks of impressive skyline and leave passersby reeling from looking up as they drive past.

The area that is today a center of business and deal-making was from the colonial period up until the 1960s comprised of sand mines and rural farmland. Inhabitants were poor and few, and the area was virtually ignored except for its importance as a supply of construction materials for the city center. In the 1960s, sand mining started to lose its ease and profitability and owners began to sell the mines to the local government, who converted them into landfills. Mounds of trash filled the now clean-swept streets of Santa Fe and attracted another segment of the Mexico City underbelly: garbage pickers, who made their living shuffling through the messy leftovers of the metropolis.

In the late 1980s, with the encouragement of President Carlos Salinas and money from US Tycoon George Soros, the Mexico City government started to displace the inhabitants of this area with promises of relocation, compensation, and improved urban infrastructure. The development of the area led up to the signing of the North American Free Trade Agreement and was a reflection of the new era and its leaders’ faith in the power of private corporations and global financial capital.

The landfills were shuttered and an urban development plan was put in place for Santa Fe that promised to usher Mexico City into the next generation of global business. In some ways, those goals have been achieved. Within the Colonia’s first decade, 170 corporations had moved their headquarters to Santa Fe. Hundreds of thousands of daily commuters run the offices, clean the houses, and make the big bucks in Santa Fe every day. 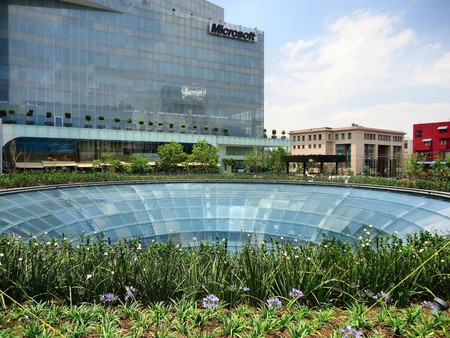 But the Colonia has not escaped the planning nightmares visited on most other outlying parts of the city – poor drainage, inconsistent services, congested public transportation, and a yawning divide between the rich and poor. As Mexico will always be Mexico, you will still find the informal street economy in Santa Fe – sidewalk vendors and makeshift kitchens – that are visible all over the city. Executives and construction workers stand side by side for just a moment each day to eat a quick lunch and get back to their lives.

High-rise buildings stand with their backs to the traffic, and the sprawling Ibero campus, one of Mexico’s most prestigious (and expensive) universities, gives students a peek at what they can expect when they graduate – elegant architecture, expanses of green grass, and high walls protecting them from the outside reality. The glint of the neighborhood’s buildings in the midday sun is enough to make you forget that the other, older, Mexico City even exists. A world inside a world, Santa Fe, which was built on piles of trash and sand, reveals nothing of its past life and encourages the rest of us to do the same.

What should tourists never, ever do in Mexico City?