Everything you need to know about St Jude: The Patron Saint of Mexico City Thieves & Delinquents 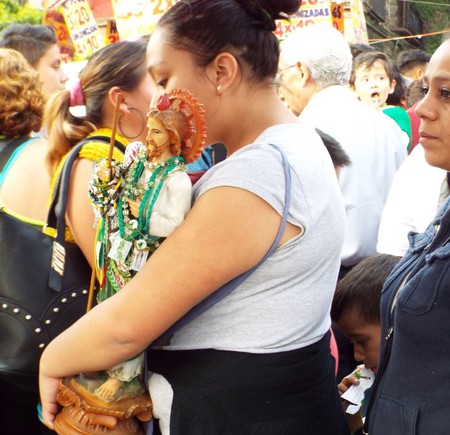 These are not the guys that you would expect to see at a Catholic mass. They’ve got rude haircuts, hardcore attitudes and maybe a joint rolled up behind their ear. But they are all here to give their thanks and make their promises to St Jude – the patron saint of Mexico City’s thieves and delinquents. 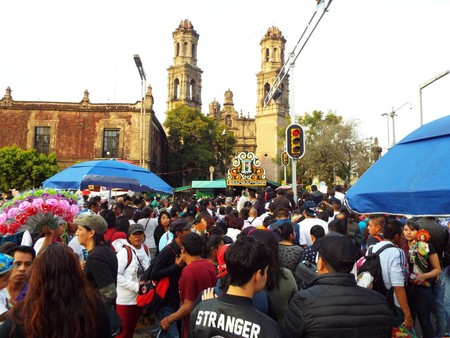 Each month hundreds of pilgrims flock to the San Hipolito church in Mexico City to celebrate their patron saint, have their statues and icons of him blessed, and make promises to St Jude should he fulfill their prayers. October 28th of each year is the annual celebration of this neighborhood savior and thousands of people come from every state in the Republic to pay their respects.

The party starts at midnight with a rendition of Las Mañanitas, Mexico’s traditional birthday song, to San Judas on his special day. This is followed by 24 hours of eating, praying, listening to the mass that is performed every hour and waiting outside the Hipolito church to enter and have your very own San Judas blessed. 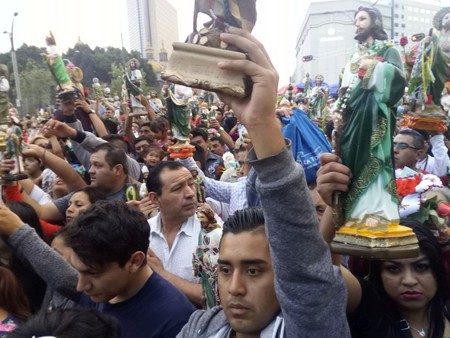 No one truly understands why the worship of this saint is so fanatical in Mexico City, but some chalk it up to his appearance. San Judas wears a golden medallion, with the face of Christ on it, around his neck, but many of his followers see it as a representation of a gold coin and look to him as the patron saint of money problems.

San Judas carries a club or sometimes an axe to represent his death in martyrdom when his head was chopped off. But many see his club as a symbol that he’s out to break some skulls, that he’ll protect you as long as you’re faithful. The underbelly of Mexico City – delinquents, junkies, thieves and various other ne’er-do-wells have adopted him as their own and believe he protects even the lowest of thieves from a rough time or getting caught.

A Woman and her St Jude statue │ | © Lydia Carey

Along with them are thousands of dedicated, ordinary people who look to this saint of lost causes for help with the tough everyday existence that can accompany life in the country’s capital. Pilgrims pray for their children, their families, their sick and their money problems and when San Judas fulfills their prayers then come back the following year and fulfill their promises to him – passing out sweets or bracelets or other trinkets to fellow pilgrims.

If you happen to be in Mexico City on the 28th of any month, head to Metro Hidalgo and you will see them – the pilgrims and their statues of San Judas. Follow the crowd, you might just find the answer to your own lost cause.