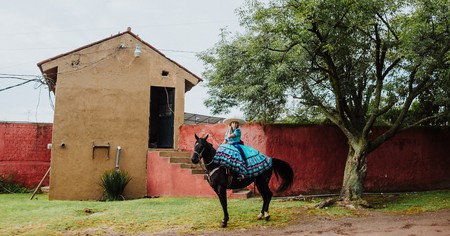 Culture Trip went in search of Mexico’s female horseback riders, otherwise known as escaramuzas in Guadalajara, to learn more about the tradition of female rodeo events and find out when you can see them perform.

Charro are a notable part of traditional Mexican culture, and even if you haven’t heard the term you have likely seen them represented. These lavishly dressed horsemen with big sombreros are one of the most identifiable figures of Mexico. 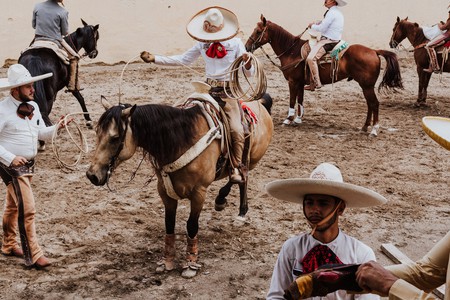 Although the male Mexican cowboys are famous around the world, their female counterparts, escaramuzas, are practically unknown outside and within Mexico. These rodeo queens embody the same values and possess the same abilities as male equestrians. Nevertheless, female representation has been more limited.

Charros and escaramuzas are both part of Mexican charrería, the most classic rodeo event in the country. While many people think of them as artists, their skills and the hard training they undergo make them real athletes. 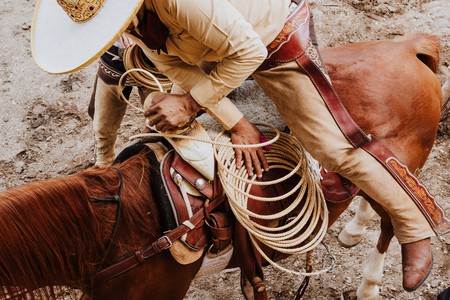 The Mexican rodeo that became the national sport

Although Mexicans love soccer, the true national sport requires horses and boots. The charrería is basically a rodeo in which charros perform a series of tricks in an arena, called lienzo charro. During a charreada, riders participate in a number of scoring events in which they have to prove their equestrian abilities. 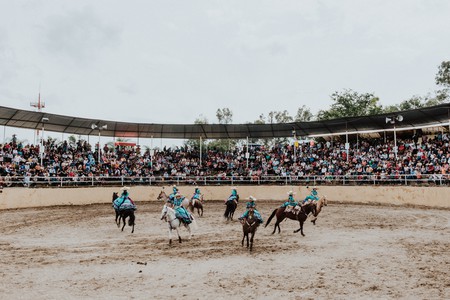 Contestants also have to demonstrate how skilled they are with a lasso, and how much control they have over their stallions. Riders train their horses to gallop, spin and go backwards, and they receive marks according to the quality of their performance. 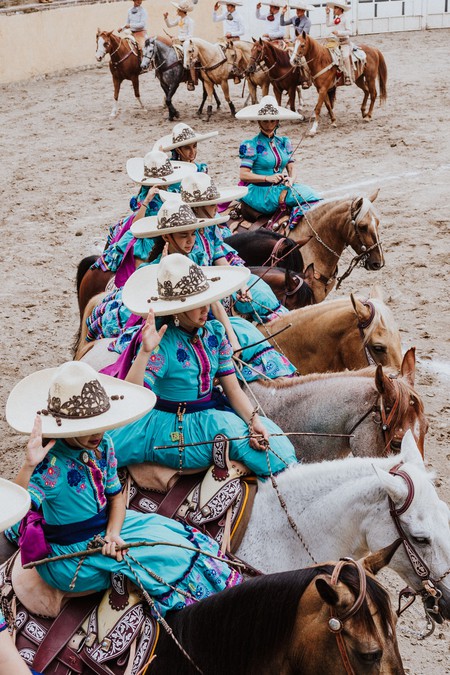 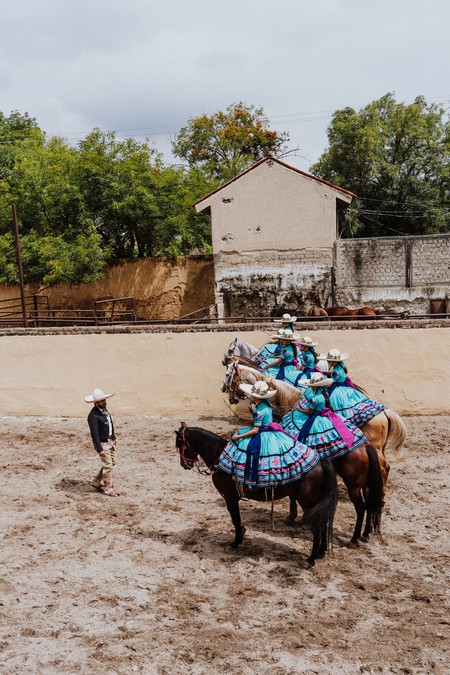 The charrería was born in the Mexican countryside. Horses were a big part of rural Mexican life, so when farmers moved to the big cities, they started practicing charrería as a way of remembering their roots. It portrays the essence of Mexican culture so deeply that UNESCO has categorised it as intangible cultural heritage. 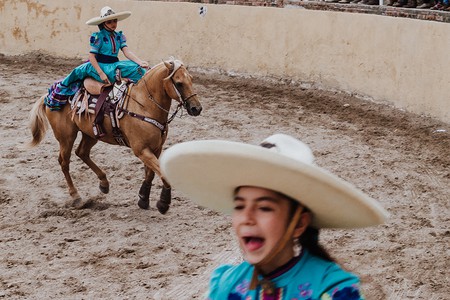 Navigating the horses is not just tricky and impressive, it's also fun | Fernando Poiré / © Culture Trip

Although it is a formal sport, it’s also a tradition passed down from fathers to sons, and mothers to daughters. There are some charrería schools where riders can receive weekly training, but this activity is essentially a family affair.

Charrería rodeo participants begin their training at a young age. 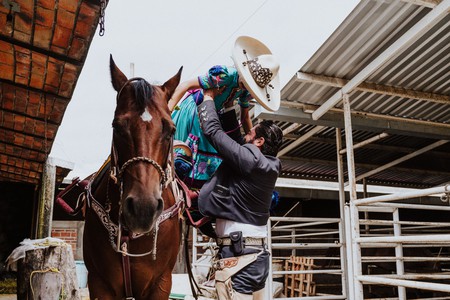 “The charrería starts with diapers, not with beards,” states Ricardo Mendoza, a veteran charro from El Herradero ranch. “My father taught me when I was just a kid and I am teaching my sons and daughters. Riding educates you with a kind of discipline and passion that you can’t find in any school.” 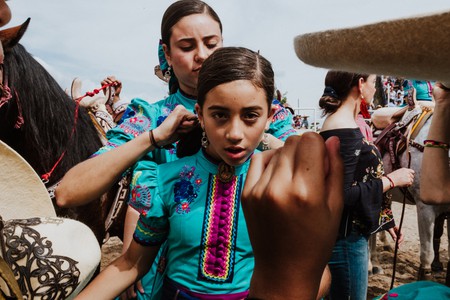 Charros and escaramuzas perform several times a year, and the Independence Day show on September 16 is one of the most important. “It’s an ode to our culture. If you want to feel like a true Mexican, there is no better place to be than in an Independence Day charreada,” says Ricardo. 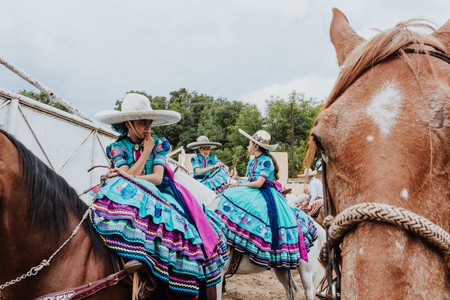 Until recently, the charrería used to be a male-only sport. However, Mexican women felt they also deserved a place inside the lienzo charro, so they decided to create a female version of it – and that’s how the escaramuza was born. An escaramuza is a group of eight women who ride at the same time and perform a carefully crafted choreography on horseback. Like charros, escaramuzas also do tricks with their horses and compete to prove their abilities as riders. 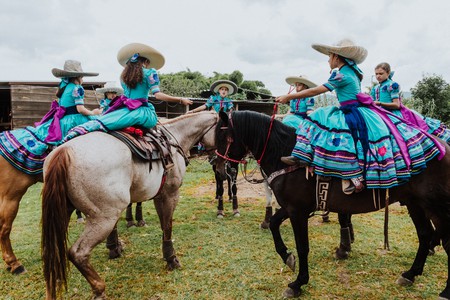 “The escaramuza is basically a horse ballet,” says Macarena Ramírez Hernández, an escaramuza pioneer in Jalisco. “It is the female side of the charrería and it’s a way to represent Mexican women and their heritage.”

Macarena started riding when she was four years old. Her five sisters and two of her friends created Las Alteñitas, one of the first escaramuza groups in Guadalajara. Her father, Gabriel Ramírez, founded the lienzo charro El Herradero, and she and her family have been performing there for more than thirty years.

“People think being an escaramuza is just about riding a horse and looking pretty, but it’s so much more than that,” Macarena explains. “Girls train two or three times per week with a coach and they have to learn twelve different movements and patterns if they want to compete.”

There are three big competitions throughout the year: the sectionals, the regionals and the nationals. The escaramuzas from El Herradero ranch compete every year. They won sixth place during one national championship. 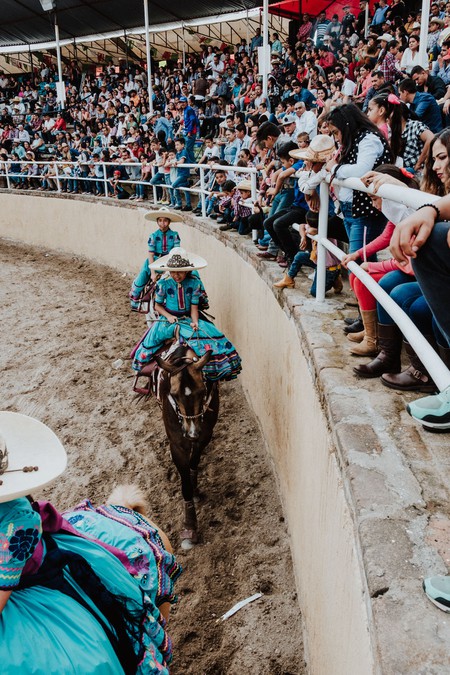 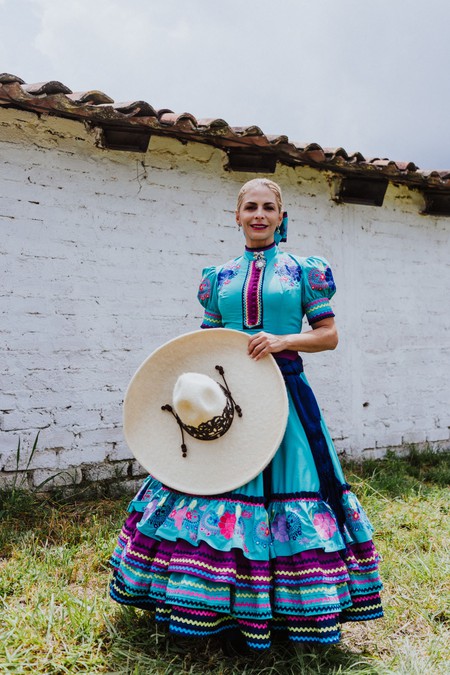 “I love the adrenaline,” says Valentina de la Torre. She has been riding since she was three years old, and is now the captain of the children’s escaramuza group. Valentina and her horse, Piquín, are responsible for leading the other girls, and coordinate the choreography. “The twists and the turns with the horses are very exciting… also, most of my friends and family are in the group, so it’s always so much fun.” 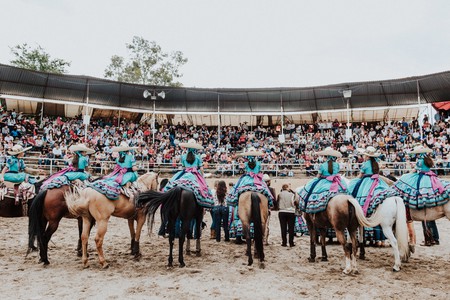 Even though people perceive escaramuzas to be the female version of charros, they are a spectacle in their own right. The women perform tricks with their horses, but their challenge is completely different. They not only mount horses wearing voluminous dresses, but also have to ride sidesaddle. While charros compete mostly individually, escaramuzas are a group. Synchronization is key; if their timing is wrong, the whole choreography could be ruined. “It’s like a big family,” says Isabela, a nine-year-old rider. “It’s good that we are all friends because it’s easier to coordinate that way and you really need to know your horse and your team.” 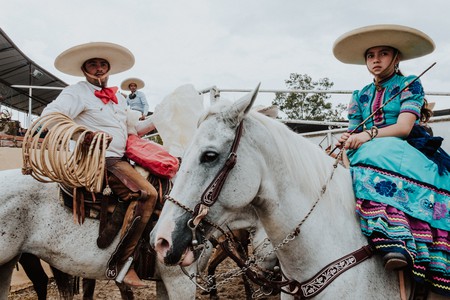 Although some people say the charrería is a very familiar and closed community, escaramuzas are pretty inclusive. There’s no age limit for horse riding. During the charreadas, three-year-old girls ride ponies and 50-year-old women show off their horse riding abilities. 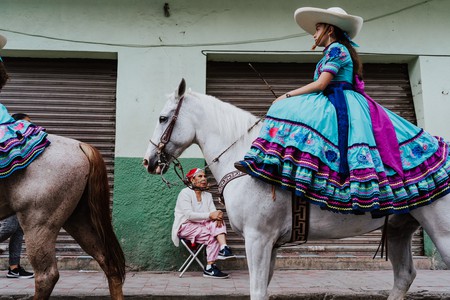 Pilar Contreras is 50, and the Independence Day Show is her first rodeo. She was not born into the charrería lifestyle like many others, but she became interested in riding when her husband decided to buy horses. “It is very exciting,” she assures as she prepares for the Independence Day parade. “Sometimes people don’t realize how much effort this requires. I’ve been training for a long time and the dress makes it even more challenging. But Macarena has been really patient and she has taught me a lot.” 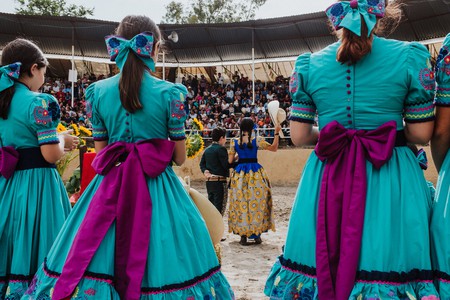 If there is something that differentiates escaramuzas from other folkloric groups in Mexico, it’s their attire. Although outfits vary between different escaramuza groups, they all share some features. 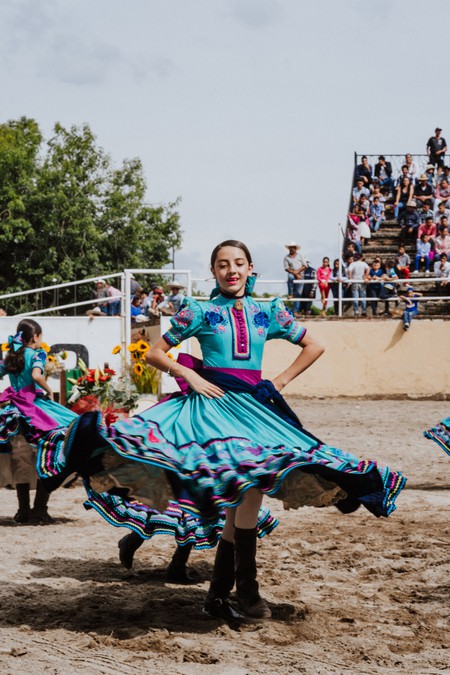 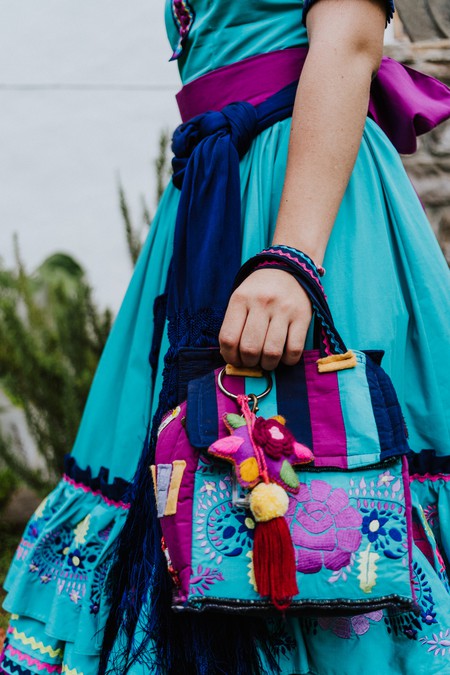 In general, female rodeo queens wear big dresses and Mexican sombreros for the competitions and performances. But it gets more complex. Each female rider has to wear a lace trouser embellished with ribbons. They also carry an underskirt with three ruffles, to give more volume, then they add a colorful dress with traditional embroidery over everything. This must have a 20-centimeter ruffle for the rider to be able to compete. The colors should be bright but not too garish or sparkly.

Escaramuzas also tie a belt around their waist, and accessorize with cowboy boots, a hair bow, and a small satchel. “We need a place to put our cell phones and lipstick,” Macarena explained. 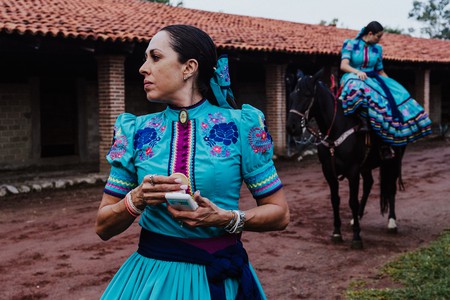 Besides organizing the performances, Macarena also designs the costumes. “I try to make them as traditional as possible, the skirt is embroidered by indigenous people from Puebla and we never use modern fabrics like tulle. We want to respect the old ways.”

After many years of being unable to compete in the lienzo charro, escaramuzas are happy to finally be able to show their horse riding skills. “It doesn’t matter if you are a woman or a man, if you are young or old, you need discipline and hard work to become a rider,” says Ricardo. 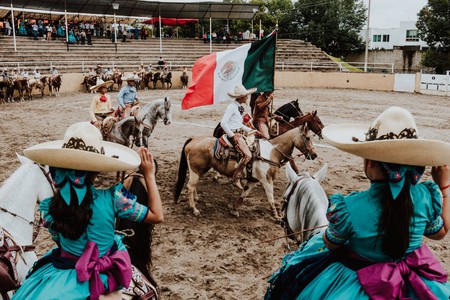 Nowadays, women can compete in the charreadas, but male and female performances are strictly separated. “Charros and escaramuzas don’t mix during the shows, they only mix in church, when they get married. That’s why this is a very familiar community,” explains Macarena. 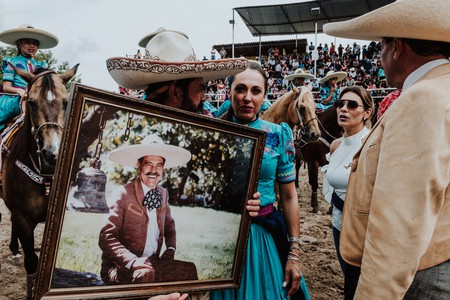 Nevertheless, although many of the escaramuzas do not think there is a macho culture inside the lienzo, Macarena does think that women face other challenges. Most of the riders are mothers, students or entrepreneurs, and they have to find a balance between their passion and their daily lives. “It can be done. You can be an escaramuza and many other things,” says the rider, “and we do it proudly because we are not a complement of charros, we are equals.” The women and men are equal in their powerful performances. 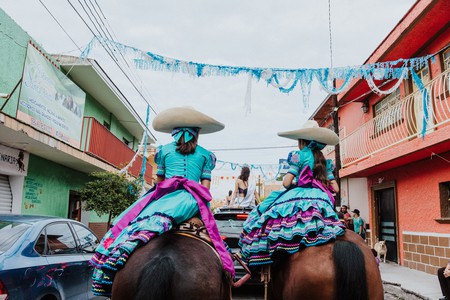