Dancing in the Street: The Ballerina Turning Mexico City into a Stage 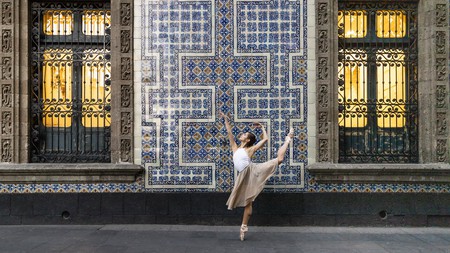 Every sidewalk is a dance floor for Scarlett Güemez, a 26-year-old ballerina who is trying to bring people closer to the Mexican art scene.

Her outfit seems perfectly normal for a relaxed Sunday afternoon. However, below her jeans, she’s not wearing sneakers, but a pair of pink ballet shoes.

The Alameda Central Park is very crowded, but Scarlett Güemez does not hesitate to lift her left leg and perform a flawless arabesque. People turn their heads towards her, and she responds by executing a pirouette that earns her applause from the improvised audience. 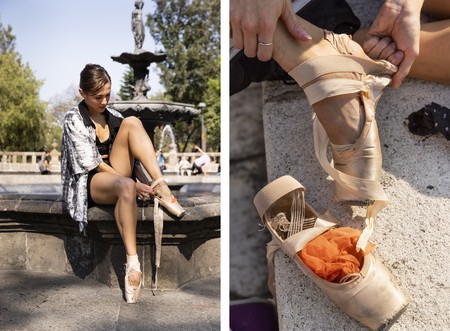 Güemez has been dancing since she was 11, but it was in 2014 when she started performing in public spaces.

“When I joined the National Dance Company in Mexico City, I got a lot of messages from photographers and videographers inviting me to collaborate,” Güemez explains after finishing her choreography and taking some pictures with her new fans. 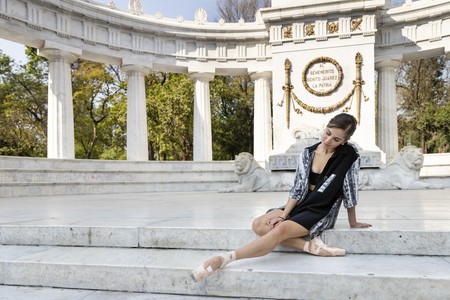 “Just give me a pair of ballet shoes and I’ll find a stage,” says Güemez | | © Carlos Jose Urquijo / Culture Trip

“We didn’t have a professional studio back then, so we decided to shoot outside,” she says. “People really seemed to like it, so I started performing in different parts of the city. It became a great way to make others aware that ballet is still a living art.”

Taking ballet outside the theaters

Whether a Mexican square, a public library or even in the middle of a forest, to Güemez, spaces are not a limitation when it comes to dancing. 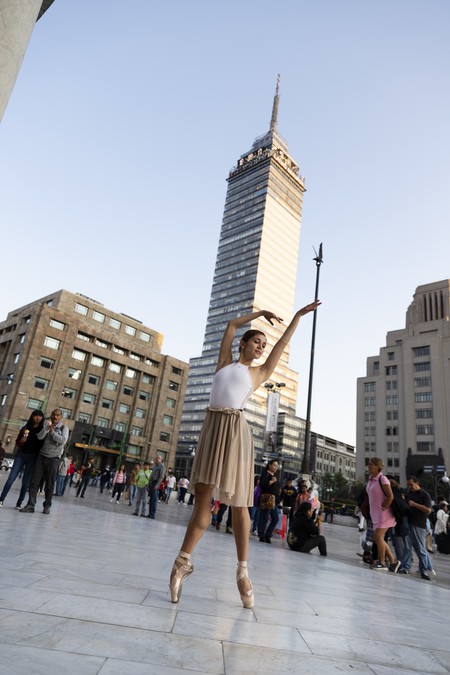 “Just give me a pair of ballet shoes and I’ll find a stage,” the ballerina says.

According to the artist, ballet shouldn’t be confined exclusively to the traditional theaters. As a performing art, it belongs to any place with potential spectators. 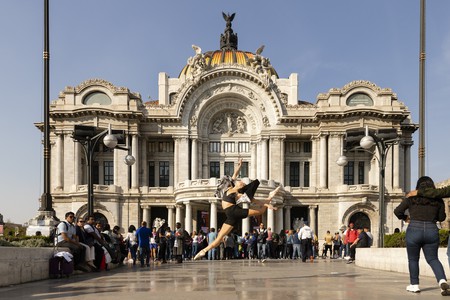 Güemez performs in front of established art institutions, such as the Palacio de Bellas Artes, demonstrating how art can also be seen outside of such buildings | | © Carlos Jose Urquijo / Culture Trip

“I think people sometimes feel intimidated by places like the Palace of Fine Arts. They think it’s too fancy or too posh for them,” she explains. “When I dance in random places, people approach me and ask about what I do. They want to know when my next show is and how they can see it. I think they begin to realize that ballet is much more approachable than they originally thought.”

Through her public performances, Güemez is trying to spark people’s curiosity in the arts and promote the National Dance Company’s work. After every outdoor show, she documents her dance moves to her 27,000 followers on Instagram or on her other social media accounts and sometimes even offers free tickets to the ballet events in the city. 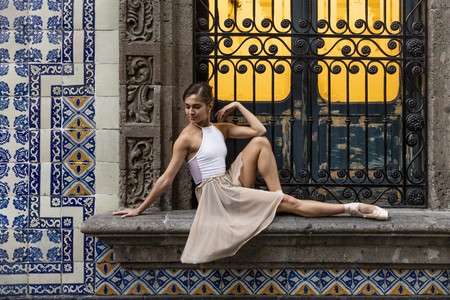 Güemez says that Mexico is her favorite stage, with its cultural details throughout the capital city such as traditionally tiled windows | | © Carlos Jose Urquijo / Culture Trip

Throughout her career, Güemez has witnessed how theaters attract more people every year and how tickets sell faster before every show, but she is also aware there is still a lot to do in the Mexican art scene.

“Ballet has something to offer to everyone,” she assures. “I dream about the day when going to the ballet is as common as going to the movies. That’s why I dance on the streets: I’m trying to normalize my art.”

Mexican pedestrians are not the only ones that have got to know Güemez’s dance moves. The performer has also done some shows in places like Argentina, Paraguay and Brazil. 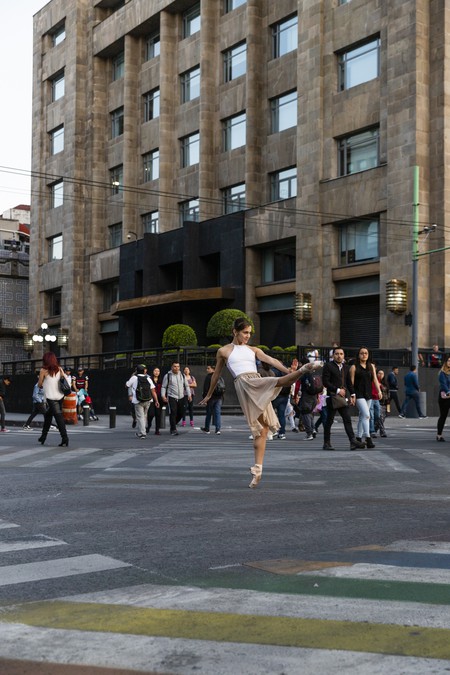 “They have been amazing experiences. I’ve learned something from each place,” she says. “But I just love performing in my own country – Mexico is my favorite stage.”

Güemez states that her street dancing not only helps to raise awareness of ballet but also of Mexico and its culture.

“If you place a ballerina in the middle of Chapultepec forest or the busy streets of the Roma neighborhood, you force people to see those places under a different light,” she says.

The artist says that ballet has a way of complementing the architecture and natural spots of the country. She just needs to decide which dance moves would look better in a specific location. Güemez has chosen places like the Xochimilco water channels, the Teotihuacan pyramids or the Soumaya Museum to perform her choreographies, but her preferred place is Mexico City’s downtown. 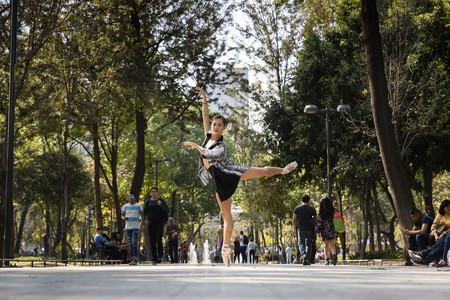 “I just love the contrast,” says Güemez. “It’s amazing to see how I can do a tour en l’air (turn in the air) right next to the corn street stall or behind a traffic policeman. It just shows how versatile ballet can be.”

The universal language of ballet

The reason Güemez believes that fine arts, and especially ballet, deserve a better spot in the Mexican entertainment scene is because they have something to offer every type of audience.

“Yes, we do perform classical pieces like Giselle or Romeo and Juliet,” the dancer says, “but not many people know that we also offer ballet shows for children and families, which are shorter and easier to watch.”

She enjoys motivating young girls to dance. After her street choreographies, she is always willing to give advice to the aspiring performers and take pictures with them.

“My mom was a dancer,” she says. “She specialized in Mexican folk dance, and she inspired me to become a ballerina. Maybe I can do that for other girls, too.” 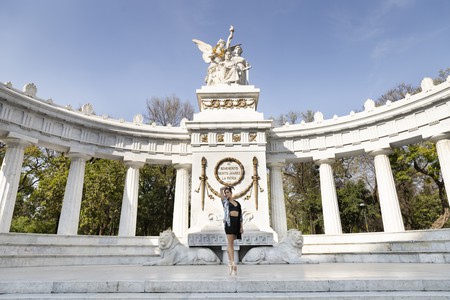 The artist affirms that ballet is an escape from reality, but she also emphasizes that this art form is not only an aesthetically pleasing show. Ballerinas are also actresses, athletes and sometimes even singers. Behind every performance, there is a story that the audience has to unravel. There’s drama, there’s mystery and also romance. The spectators have the opportunity to accompany the characters on their journey, and they get to interpret their actions and feelings exclusively through their body language.

According to Güemez, there are no cultural barriers when it comes to this type of performance. Everyone can interpret a performance in their own way.

“Ballet is much more than dancing; it’s storytelling in its purest form,” Güemez says. “You don’t have to be rich or well-educated to enjoy ballet. Dancing has no words; it communicates with a universal language, you just need to give yourself a chance to listen to it.”