Mexican-born, Berlin-based contemporary artist Damián Ortega is certainly one to watch; his witty and ultra-creative works explore both culture and commodification. We give you five fascinating facts about this rather intriguing artist. 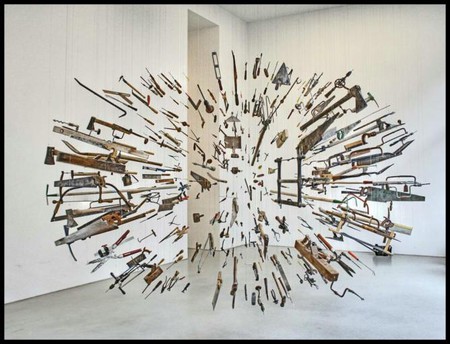 From Rags to Riches

Ortega was not set up for success; it was his arresting works of art that gained the world’s notice. The artist is sharply analytical in his work, proving him to be a genius of critical thought, which he then filters through a lens of witty humor. It is no wonder that he started out as a political cartoonist, moving on to visual art and gaining wide recognition since.

Ortega is a student of the post-conceptual artistic style, as taught to him by his mentor Gabriel Orozco. He started producing his exceptional work in 1996, and has had a wide-ranging, fascinating career. Notable pieces include ‘Tortillas Construction Module’ and ‘Cosmic Thing’. Ortega works through various mediums to communicate a message in an enticingly playful way. His pieces are often 3D displays, but he has also dabbled in photographic and film work. He continually excels in each diverse artistic outlet he explores.

‘Controller of the Universe’ is an excellent example of Ortega’s thought-inspiring creations. It consists of a large number of hand tools suspended in mid air to form a sphere with a space in the middle. Axes, hammers, saws, picks, and many more tools make up the piece. One interpretation of this work is that it invites contemplation on humanity’s manipulation of nature and our assumed domination over all other life. It asks whether we really control as much as we think, and if the tools we have made can truly master all that we face as a species.

Ortega as an Artistic Educator

Ortega yearns to understand how everything works, and he shows viewers his struggle to figure out the larger mechanisms of society. His concerns regarding cultural issues are often reflected in the simpler objects that society produces. In ‘120 Days’ he warps glass Coca Cola bottles into new shapes, perhaps hoping that the work will provide some insight into the psychology of marketing, or the effects of Americanization through the widespread consumption of American products. This is just one instance in which he reminds art observers to look for the ripples that start with ordinary objects.

The artist’s work can be found in galleries and exhibitions across the globe. Ortega’s home country of Mexico has exhibited his work, and his new place of residence, Berlin, exhibits his work on a frequent basis. The USA has also been fortunate enough to house his art in Boston and Los Angeles, to name just a few. Much of the artist’s work has also been shown at the Tate Modern in London for the exhibition ‘Do It Yourself’.