Could Mexico’s Next President Be an Indigenous Woman? 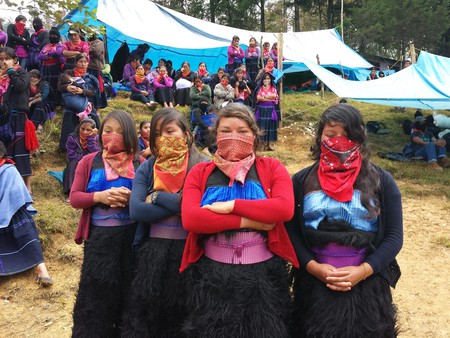 Not since the rule of liberal-leaning lawyer Benito Juárez has Mexico had an indigenous person in power, and that was almost 150 years ago. However, the face of Mexican politics could drastically change with the upcoming 2018 elections, as for the first time ever an indigenous woman is running for office.

María de Jesús Patricio – known as Marichuy – is an indigenous Nahua woman from Tuxpan, Jalisco, a state on Mexico’s western coast. Despite being a healer by profession, this recent presidential campaign isn’t her first foray into the political arena – she was one of the founding members of the Indigenous National Congress in 1996 and spoke in 2001 before the national legislature about the rights of indigenous women.

Therefore, it’s unsurprising that she’s got the support of the group she helped to found, the Indigenous National Congress. She’s also received the support of the famous Zapatista Liberation Army, the ski mask-clad revolutionary unit who are best known for their 1994 Chiapas uprising in demand of indigenous rights.

It seems that their largely symbolic campaign will be heavily inspired by indigenous notions of communalism, anti-capitalism, representation and a coming together of opinions, rather than a steamrolling of differing opinions. It’s said her supporters refer to her as their spokesperson, not their candidate.

However, communal campaigning and the support of revolutionary groups isn’t enough, as new rules in the Mexican electoral system mean she has just 120 days to ratify her nomination as an independent candidate, a process which requires signatures from members of at least 17 of the 32 Mexican states. The Guardian reported in mid-June that she was still in need of around 850,000.

What is certain is that, even if unsuccessful, this much-needed presence of an indigenous woman in Mexico’s political sphere will make an impact on the widely criticized Mexican political system, with which many citizens are disillusioned. It’s said that only a third of the eligible electorate turn out at the polls, with many choosing to spoil their ballots rather than cast a vote for any of the principal or smaller parties.

And that’s really what it’s all about for Marichuy and her supporters, as she claims her motivation for running is not about becoming president or even getting votes. Rather, as PRI reports, her aim is to “bring together our [indigenous] communities that have been hit hard for years and years and that, I think, right now need to look for a way to keep on existing”, while also reiterating that this is a campaign not just for indigenous communities, but for all Mexicans, especially the working class.

Patricio’s aim is to shake up the face of Mexican politics, which she claims is just as bad as organised crime, saying in the Guardian that “they all facilitate the exploitation of our natural wealth.” Whatever happens, the participation of this inspiring 57-year-old Nahua healer from Jalisco is indicative that the Mexican people, at least in some strata of society, want to make waves in Mexican politics for the first time in many years.