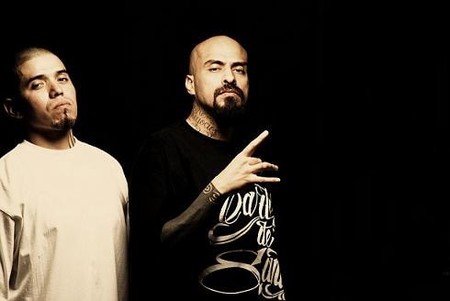 In the past decade, Santa Muerte – a female skeleton saint who personifies death – has become hugely popular in Mexico, attracting millions of followers despite the condemnation of the Roman Catholic Church. One group has taken to the devotion with particular enthusiasm – the underground rappers who are finally grabbing the spotlight in Mexico, Cartel de Santa.

Monterrey hip-hop outfit Cartel de Santa, one of the best-known rap crews in Mexico, were one of the first musical groups to pay homage to the skeleton saint in song.

The 2004 track “Santa Muerte” is dedicated to the controversial deity. Released as part of their second album, Vol. II, the YouTube upload of the song has accumulated more than 26 million views. In the lyrics, lead vocalist MC Babo directly addresses the saint.

“I’m ready whenever you send for me Holy Mother,” he raps, before speaking of his wish to be remembered by his loved ones: “The blood relations and the relations that I made on the corners.”

Unfortunately for MC Babo, his devotion to the saint did little to help him avoid controversy. In 2007, he shot at an old rival in his home city of Monterrey. According to MC Babo, a bullet ricocheted off the floor and killed his fellow band member and friend Ulises Buenrostro. The lead vocalist served 9 months in jail. 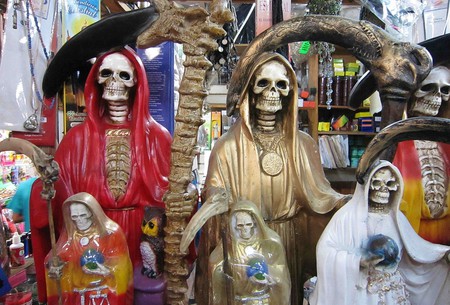 In Mexico, Santa Muerte and her followers are often associated with criminality. The folk saint is undoubtedly popular with drug traffickers, criminals and sex workers – although most of her followers don’t fit any of these descriptions.

But for rappers like Cartel de Santa the saint’s relationship with the illicit, dangerous side of life only adds to her appeal.

As well as inspiring genuine devotion, Santa Muerte also serves as a way of establishing authenticity, allowing rappers to align themselves with the hardened criminals who share their belief.

The origins of Santa Muerte are still subject to debate but everyone agrees that Enriqueta Romero transformed the cult on Halloween, 2001, when she placed a statue of the saint in front of her home in Mexico City’s rough and rundown Tepito neighborhood. Since that pivotal day, the statue has attracted a constant stream of followers, who bring their statues to the shrine or leave offerings such as alcohol, cigarettes or roses at the altar.

Mexican rapper Alemán, who hails from the coastal state of Baja California Sur, recently recorded a music video outside of the shrine. The song “Tantas Veces” (How Many Times) also features Tijuana rapper Fntxy and Yung Sarria, from Cali, Colombia.

Although the lyrics actually make no reference to Santa Muerte, the choice of location clearly demonstrates Alemán’s enthusiasm for the saint.

The Lady of the Scythe

Many up and coming rappers are keen to offer public displays of affection for the saint. Mose Quintero, a 21-year-old MC from Guadalajara regularly visits the small Santa Muerte temple on the outskirts of the city. Sometimes he raps after the service, dedicating a rhyming prayer to the female skeleton saint.

Like many devotees, Quintero also has a Santa Muerte tattoo, which sits still unfinished on his left rib cage. In November last year, his rap crew published their latest song online. Entitled “Lady of the Scythe,” the chorus translates as follows:

“Master of time and respected by many,

Lady of Justice, Lady of the Scythe.

Social class – you’re not interested in that at all,

Lady of Justice, Lady of the Scythe.”