The visual vocabulary of Mexican artist Carlos Amorales works to instill unease in the artist’s viewers, while questioning our collective understanding of horrific imagery. Federico Rosa explores the duality of this artist’s work, at once menacing and self- reflective. 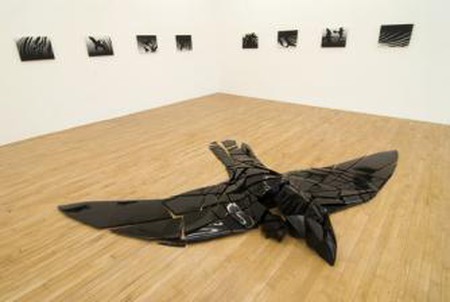 Drawing is the skeleton within Carlos Amorales’ work. His final products however, range from animations, to sculptures, paintings, installations, and performances. His works are composed from images that constitute his personal library, referred to as The Liquid Archive. Within it, hundreds of drawings, done with the help of vector graphics (or rotoscoping), produced and collected by the artist since 1999, are manipulated to create a diverse body of work beyond the limits of drawing. The Liquid Archive comprises exhaustive material with his signature forms, figures, and patterns from which his final pieces are amalgamated. Animals of the likes of ravens, moths, wolves, hybrid creatures, symbols such as skulls, and objects like passenger airplanes, populate this image-reservoir that recalls the nightmarish and the horrifying; a collection of popular horror iconology. 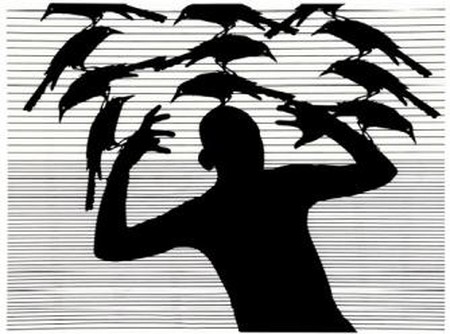 Born in Mexico City in 1970, Amorales attended the Gerrit Rietveld Academy and the Rijksakademie in Amsterdam from 1992 to 1996. True to his origins, the artist works in the Mexican Capital city, and certain symbols, such as the smiling skull, are directly derived from traditional Mexican imagery. His work combines the highly precise, minimalist, execution of the Dutch ‘De Stijl’ artists, and imagery that echoes Romanticism’s fascination with terror and the fantastic. The series of paintings The Bad Sleep Well (2004), are rendered with precise delineation, and are based on images taken from The Liquid Archive. The nightmarish scenery of a horror story emerges: silhouettes of contorted figures, smiling skulls, crows, barren trees, and spider-webs are all rendered in basic black, white, gray, and smears of red. 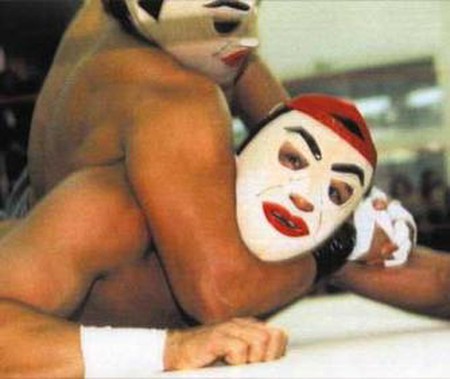 The artist has also ventured into disciplines that might seem at odds with his strong emphasis on drawing. Amorales vs. Amorales, an elaborate performance that brought him widespread critical attention, was exhibited at the San Francisco Museum of Modern Art in 2003. The work references the Mexican popular cultural phenomenon of ‘lucha libre’, a theater of the absurd where masked superheroes battle each other in faux wrestling matches. In collaboration with former Mexican wrestler Ray Rosas, Amorales created a ‘fictitious’ identity by fabricating a mask molded to his facial features. The work culminated in a match against his ‘other’ self, in a performance that explored psychosocial aspects of identity, whilst evaluating the ritualistic aspects of lucha libre as a tradition. Beliefs such as the battle between Good and Evil, or stereotypes of what is perceived as Masculinity in Mexican society, are symbolically represented in lucha libre. The overtly decorated masks serve a ceremonial purpose, identifying anonymous heroes, while the matches themselves are all part of a moral fable. As much as his art can be an aesthetic experience, Amorales demonstrates how it can also be an instrument for social and cultural analysis. 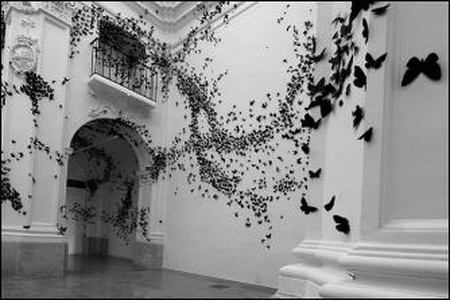 His installation works, on the other hand, engage in dialogue with illustration and design. Black Cloud (2011) features hundreds of paper cut outs of life-size moths glued to the wall in swarm-like patterns. Even though the idea of infestation or plague may come to mind, the installation is so carefully considered and executed, that its elegance counterbalances the dark nature of the imagery. The theme might appear somber, but the crispness of the visual impact stresses its limitations and borders, and implies a clear sense of edition. Emotion, in Amorales’ work, is counterbalanced by the perfection of execution and considered composition. 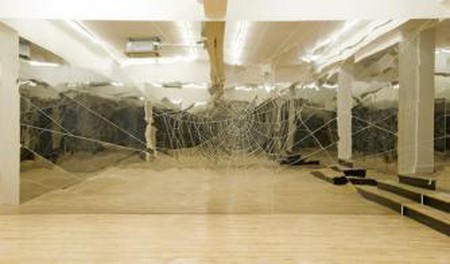 His sculpture Dark Mirror (2008) features aspects of Amorales’ increasingly broad intellectual interests. Large pieces of black resin form the shape of a blackbird, which, due to its reflective surface, becomes also a broken mirror, or a broken bird, one that might reflect our darkest fears, such as falling or crashing. In a similar operation, entitled A Mile of String (2008), Amorales cut the shape of a spider web into a mirror. The infinite variations of form, the simultaneous distortion/replication of reality, and the multiplication of the self, create a perfect stage for Amorales to explore the metaphysical aspects of the mirror’s qualities. The mirror becomes a labyrinth, one that traps the viewer in its gaze as a spider traps its prey. 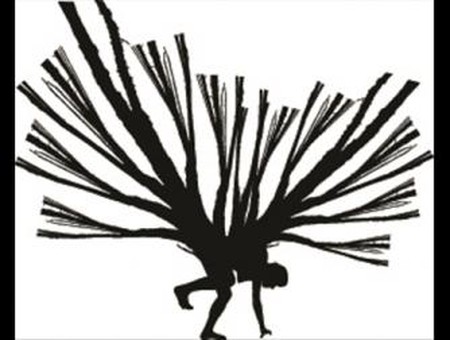 Following these philosophical assumptions, Amorales has continued to make various pieces with the motif of a Rorschach. Also known an inkblot test, a Rorschach is a psychological examination in which subjects’ perceptions of these inkblots are recorded to be interpreted and analysed. Inkblot tests are especially used to detect possible mental disorders or emotional dysfunctions in cases where patients are not willing to be truthful or open about their innermost thoughts. In Rorschach Test Animation (2004), shapes from the Liquid Archive are fragmented, dissolved, and reconfigured in a video loop that allows the viewer to make free associations of the imagery he sees. The viewer is not so much a passive observer as a subject, one that is coerced to confront his own fears.

Assuming that all viewing is inherently subjective and that one will inevitably see what one fears may be true of all art in some sense. Yet a particular feeling of wonder and awe with the mysteries of the world is what makes Amorales’ work distinct. For Amorales, darkness is the flip side of beauty, yet rendered in black and white, with splashes of red. The unlikely, yet effective, combination of precise rendering with dark imagery confronts the viewer not only with a sense of dread or threat, but also of self-analysis and catharsis of our popular notions of horror.