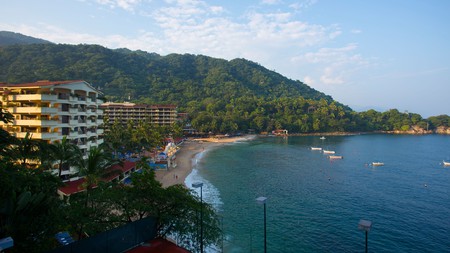 The vegetation-covered peaks of the Sierra Madre nudge Puerto Vallarta, Jalisco, to the waters of western Mexico’s Bahia de Banderas. Scattered in between is an exciting collection of boutique stays, which range from a celebrity bolthole to budget-friendly escape in the thick of the action. Whether you’ve come to delight in that natural beauty or party late into the night, there’s a boutique for you in Puerto Vallarta. Here are the best. 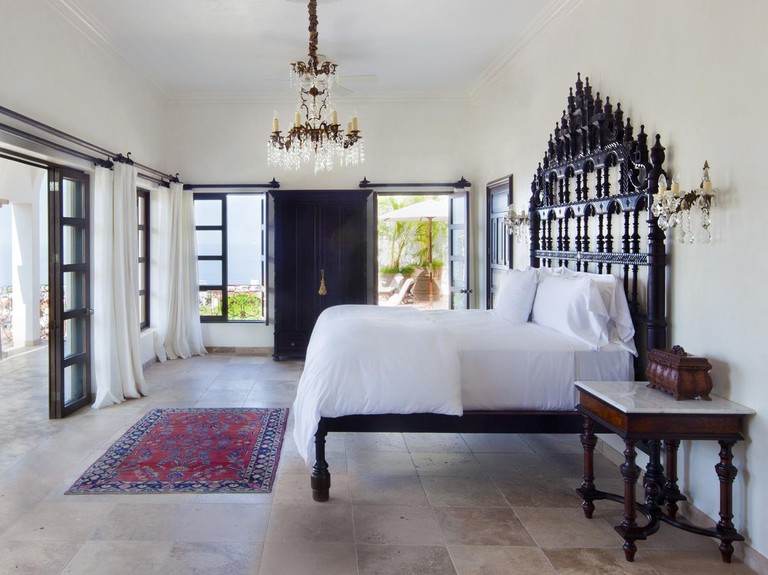 Courtesy of Casa Kimberly Boutique Hotel / Expedia
View Rooms
Achingly romantic Casa Kimberly oozes the presence of its most famous occupants, Elizabeth Taylor and Richard Burton. Their grand colonial villa has been converted into a nine-suite hotel. Walls are lined with film posters and images of the couple’s glamorous parties, premieres and exotic vacations, while the cavernous suites are named after Taylor’s films. Each is individually decorated, full of objet d’art that look like they’ve been brought back from those exotic trips. Opt for Taylor’s former bedroom, it still has the pink-tiled heart-shaped bathtub she commissioned for herself.
EVERYTHING YOU NEED TO KNOW 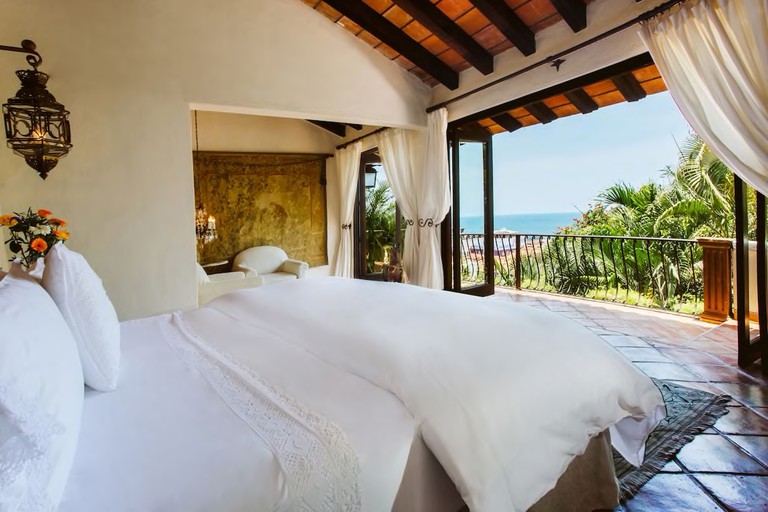 Another Richard Burton residence, and equally sophisticated, this traditional hacienda hugs a peaceful central courtyard shaded with soaring palms and peppered with enticing tiled alcoves and hideaways. Turn-of-the-century furnishings evoke a sensually gothic atmosphere; think altars as bed heads and candles dripping over candelabras. The setting completes the picture; perched on the hilltop above Puerto Vallarta’s most iconic building, the Our Lady of Guadalupe Church. 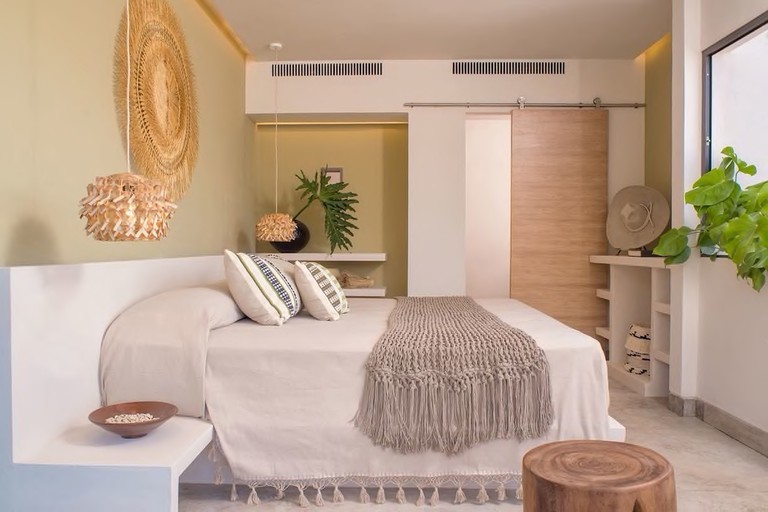 Courtesy of Hotel Amapa / Expedia
View Rooms
Find inner peace where traditional Mexico meets modernism. Hotel Amapa is all about clean lines and muted colorways to release the mind from the frenetic life outside. A showcase for Mexican design, the interiors are inspired by Luis Barragan, a celebrated architect born in Guadalajara who put emphasis on bold colors and raw materials. The bedroom surfaces are covered in a cool clay from Oaxaca while Mexican handcrafts and terracotta add warmth.
EVERYTHING YOU NEED TO KNOW 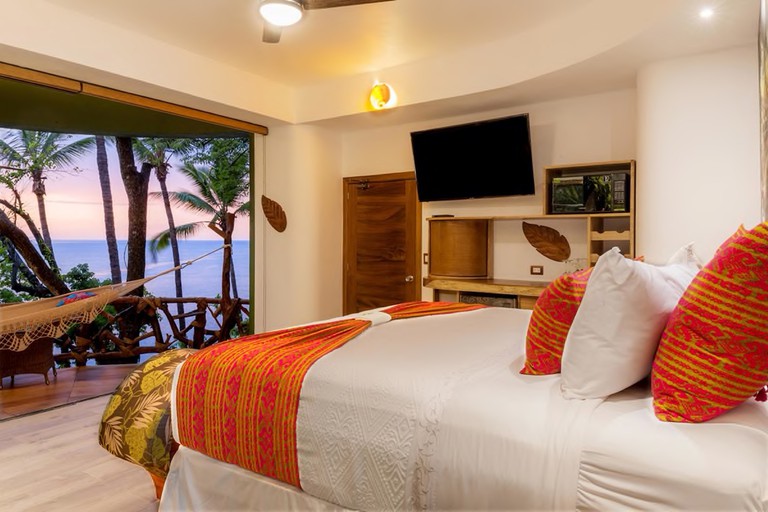 Bursting through the jungle of quaint fishing town Boca de Tomatlan, the terracotta-colored Villa Lala offers an at-one-with-nature experience. Penthouses and suites are built into fig trees, elevating guests into the tropical canopy and bringing mountain and ocean views. Wash basins carved of stone float on tempered glass, while a shower emerges from a branch and the rest of the tree shields you from prying eyes. If that’s not for you, ground-based suites are equally memorable with floor-to-ceiling windows at the foot of your bed. 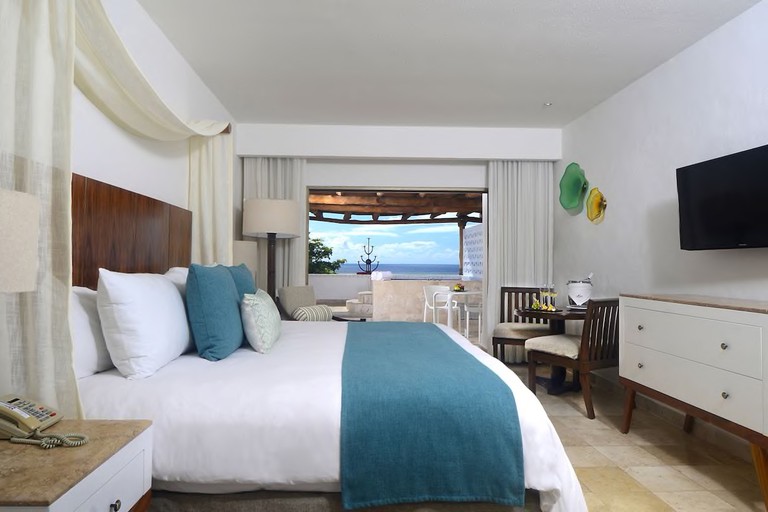 Occupying a plum spot on the northern end of Playa Camarones, this contemporary boutique combines modern sophistication with the natural beauty of the bay. Central to it all is an enticing culinary offering; the hotel serves modern cuisine inspired by traditional Mexican recipes. It makes sense to use the gourmet all-inclusive plan. All restaurants have sea views, but none better than the exclusive Chef’s Table option. This small group dining experience takes place on a small jetty under a string of lanterns and the stars. 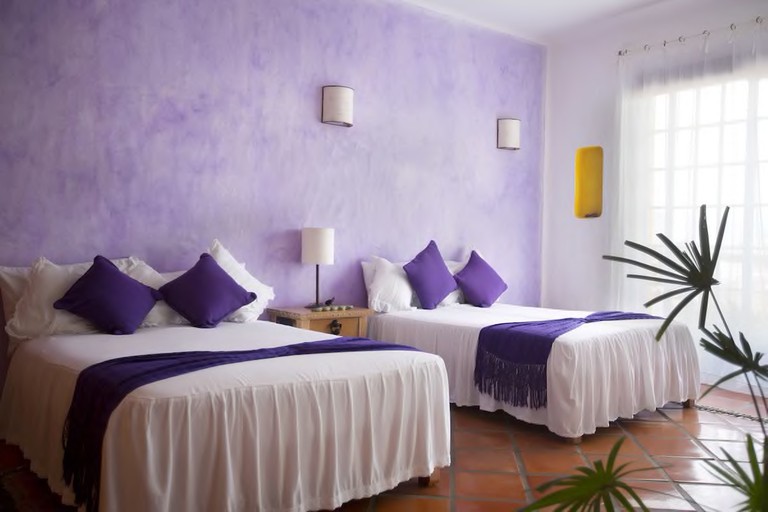 Courtesy of Luna Líquida Hotel Boutique / Expedia
View Rooms
Its name means liquid moon, presumably after the beautiful night scenes you can drink in from the peace of your balcony. It’s conveniently located just a few blocks from the bars, restaurants and nightclubs of the Malecon beachside boardwalk. Some of the rooms have fully equipped kitchens for when you fancy a night in. Also make sure to head to the rooftop pool for views across the city’s red-tiled rooftops and ocean beyond.
EVERYTHING YOU NEED TO KNOW 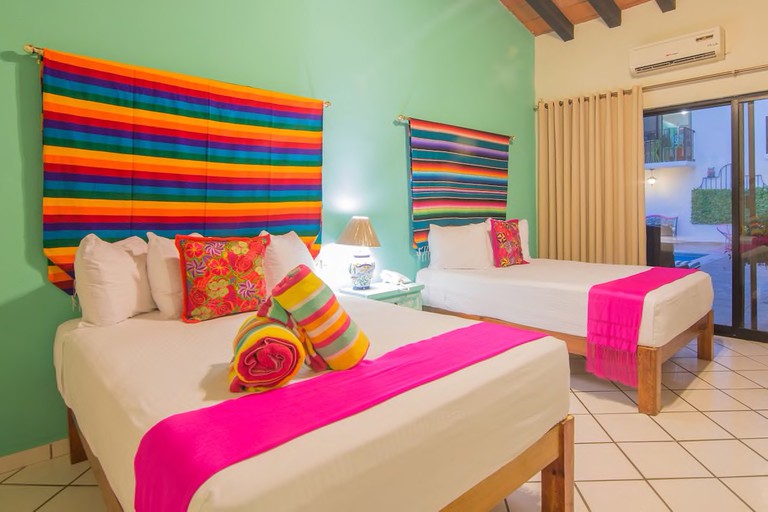 Casa Maria Hotel adds a bit of culture to its already cool offering – it doubles up as an art gallery with ever-changing exhibitions. The hotel itself is a riot of color. It’s hard not to smile with its vibrant pops at every turn. Meet fellow guests in the hip pool, bar and lounge area or take a stroll to the nearby beach for swimming, dining and sundowners. If you’re looking for an unpretentious adults-only bolthole in Puerto Vallarta’s Romantic Zone, this is it. 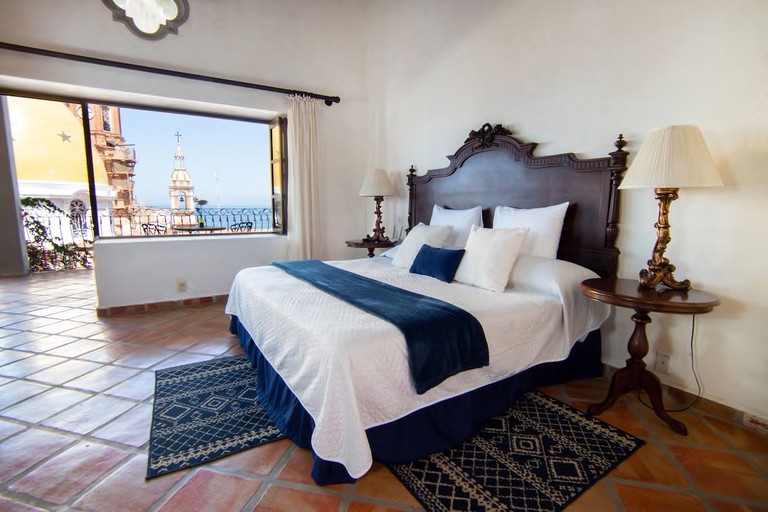 The “bell” in question is that of the neighboring Our Lady of Guadalupe church. This boutique sits in the highly desirable Gringo Gulch, the area favored by Richard Burton and Elizabeth Taylor, probably due to its bougainvillea-draped beauty, white stucco architecture and red-tiled roofs – all of which can be viewed from many of the rooms at this sumptuous hotel. Guests can dine on Italian food at the open-air La Cappella restaurant, which overlooks the city. 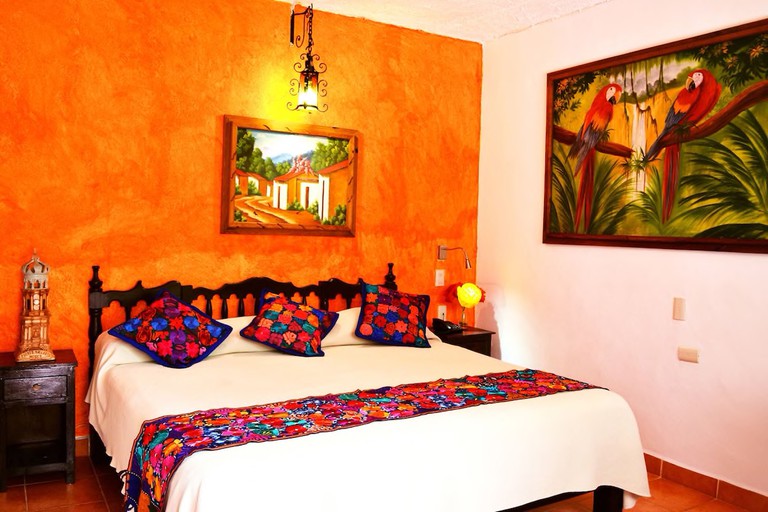 A community spirit flows through this hotel, which is set just a couple of minutes from the Malecon. Days can be spent shopping for fresh fish and tropical fruits at the local produce market, before returning to cook a feast in the communal kitchen. The courtyard is a retreat of tropical trees and bright flowers, a peaceful spot to relax and read. Start your day at Fredy’s Tucan, a lively cafe attached to the hotel, to drink in the locals’ energy with your coffee.