The Best Resorts in Baja California 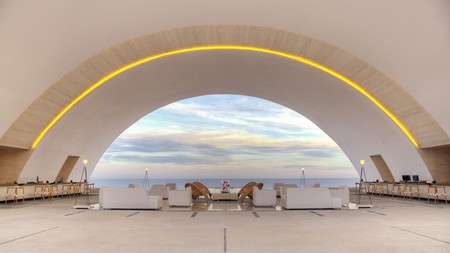 If you’re heading to Baja California, on the west coast of Mexico, you can’t go wrong with Cabo San Lucas or San José del Cabo. But away from the luxe resorts, why not try the boutiques of Todos Santos or San Felipe, or the vineyards of Valle de Guadalupe. Here’s our pick of the best. 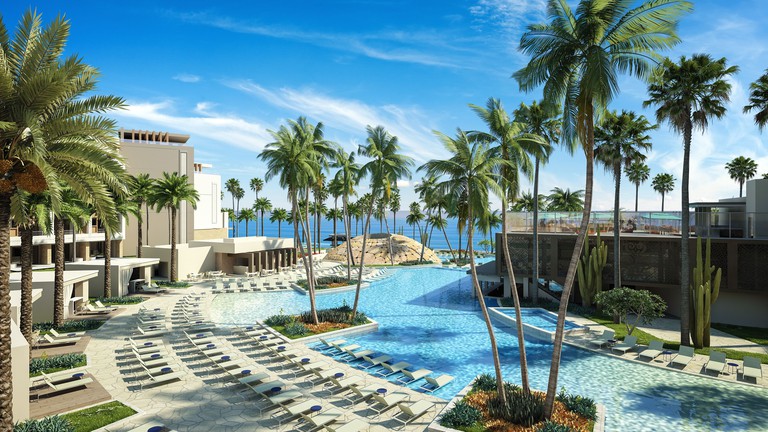 Courtesy of Hard Rock Hotel Los Cabos / Expedia
View Rooms
Pack your mirrored shades – the Hard Rock brings glitz and glam to the shores of Cabo San Lucas. You don’t need to be a paparazzi darling to get the rock star treatment; its contemporary rooms come with ocean views and a hydro spa tub on the balcony as standard. Its five pools have swim-up bars, water slides and shaded swings. Plus the all-inclusive package means you’ll want for nothing and includes an extensive selection of restaurants, head to Los Gallos for pan-Mexican cuisine served with panoramic ocean views.
More info 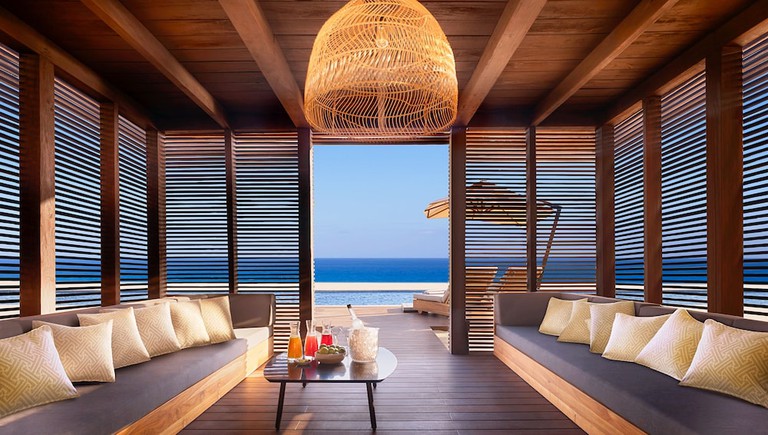 Courtesy of Nobu Hotel Los Cabos / Expedia
View Rooms
Sitting on the tip of the Baja California Peninsula, Nobu blends Japanese minimalism with the easy-going vibe of Cabo San Lucas. Its Zen-like rooms, many of which have ocean views, are complemented by an array of pleasing extras: deep soaking tubs, terry robes and Natura Bissé bath amenities. The 13,500sqft (1,254sqm) spa operates on Asian-inspired traditions and includes a hydrotherapy garden, water circuit and experiential shower. This being the work of renowned chef Nobu Matsuhisa, the food is exemplary. Head to Nobu Restaurant to try his signature dishes such as rock shrimp tempura and miso black cod.
More info 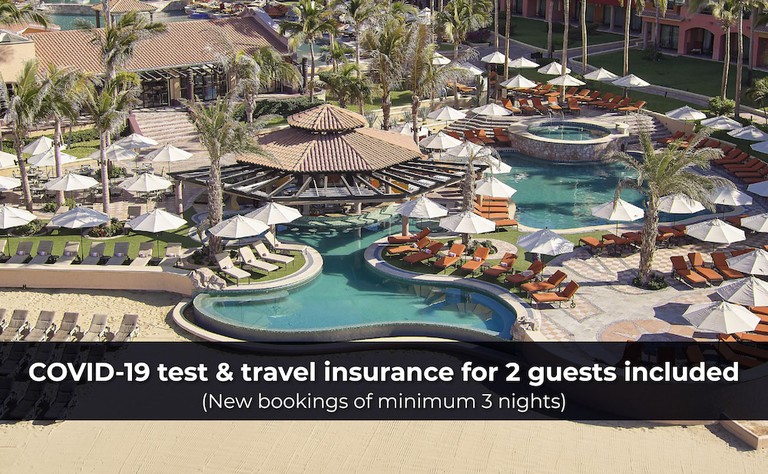 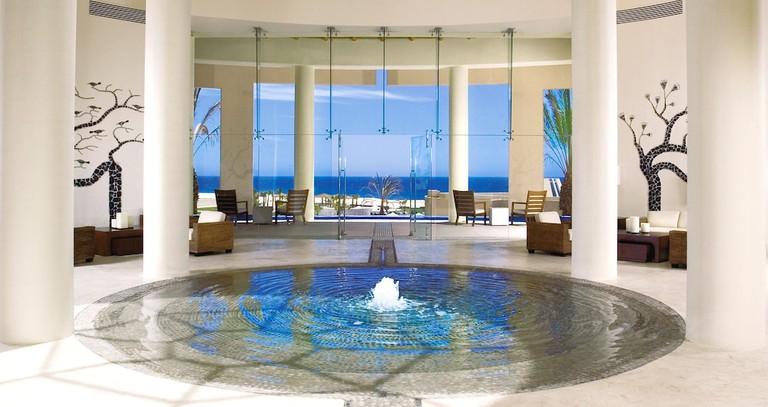 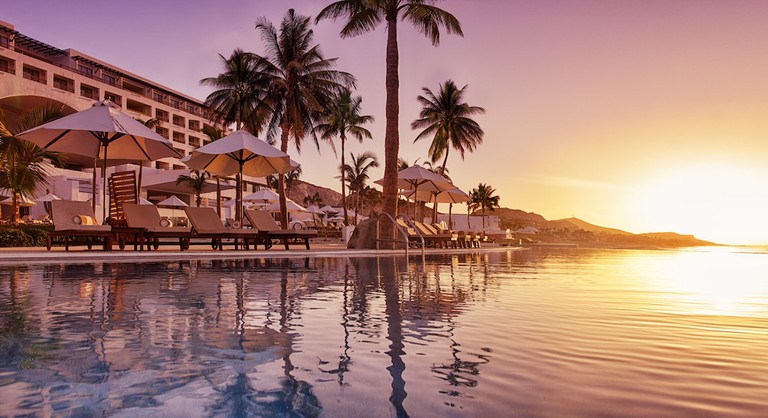 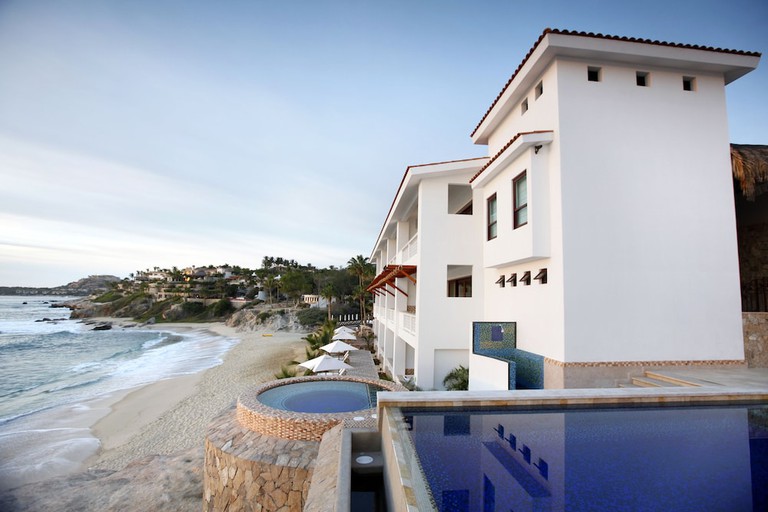 Courtesy of Cabo Surf Hotel / Expedia
View Rooms
It’s all in the name. A stay at this beach boutique resort is all about hitting the waves, which lap practically at the feet of the hotel. When you’re not tackling the surf (lessons are available for newbies) enjoy fresh seafood under the thatched-roof palapa restaurant, 7 Seas. Alternatively, drive 10 minutes to central San José del Cabo, the calmer of the Los Cabos twins, with its charming boutiques and Jesuit church, Parroquia San José.
More info 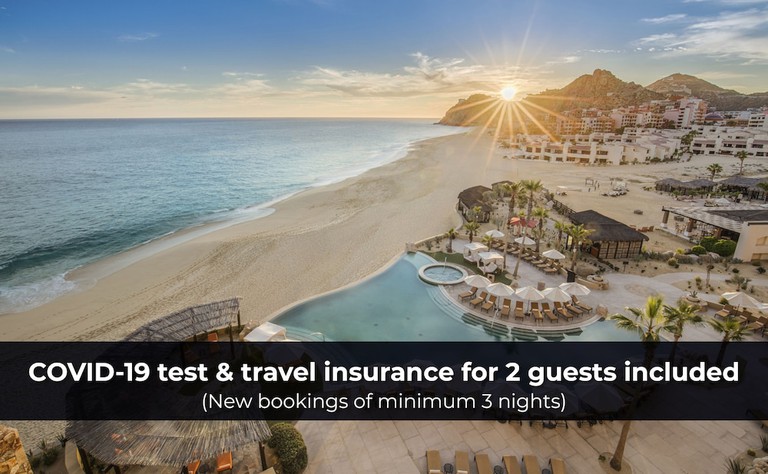 Courtesy of Grand Solmar Lands End Resort And Spa - All Inclusive Optional / Expedia
View Rooms
Just moments from El Arco, this luxury resort occupies prime real estate. It’s within walking distance of downtown Cabo San Lucas, but it’s the secluded beach that really appeals to most. Spend your days gazing out to the sea from the beachside pools – swim-up bars will keep you refreshed. Then take advantage of the gastronomic delights. Head to signature eatery La Roca for field-to-fork dining inspired by Baja-American flavors.
More info

The Cape, a Thompson Hotel 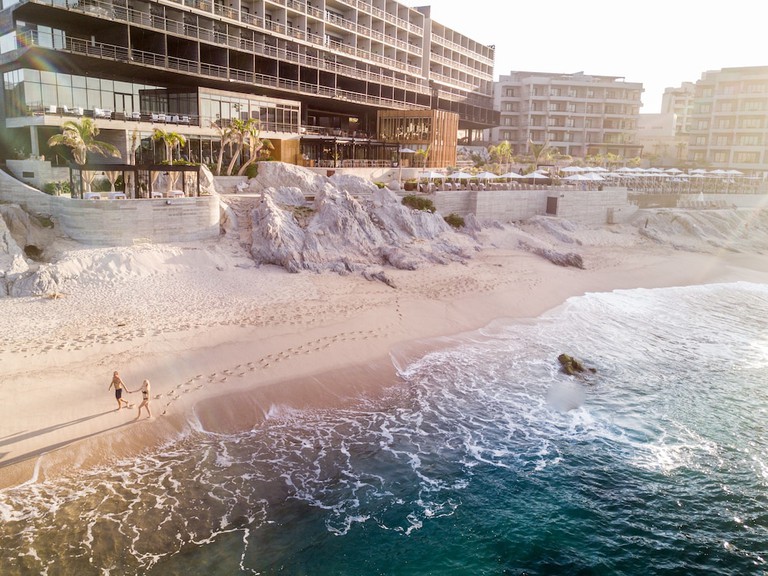 Courtesy of The Cape, a Thompson Hotel / Expedia
View Rooms
The work of Mexican architect Javier Sanchez, this luxury boutique is a design marvel sitting within view of El Arco. Each of its contemporary suites looks over that iconic landmark, and includes a private balcony, hanging daybed and a sumptuous copper tub. If you can tear yourself away from the room, the luxury touches continue through the resort from the outdoor infinity and saltwater pool to the selection of fine-dining restaurants. On that note, be sure to visit Manta, a fresh seafood eatery from one of Mexico’s most celebrated chefs, Enrique Olvera.
More info 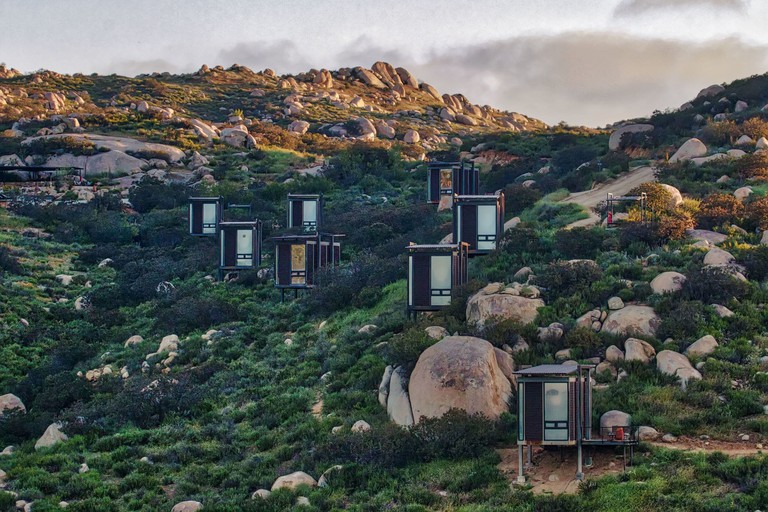 Courtesy of Encuentro Guadalupe / Expedia
View Rooms
Oenophiles will be well acquainted with Valle de Guadalupe, Baja California’s thriving wine region. But for those who still think of Mexico as a tequila-only zone, a stop here is essential. Combine your vineyard tours with a stay at Encuentro Guadalupe, an industrial boutique of 22 container-style lofts sitting on the valley slopes. Each comes with a private terrace, an outdoor clay kiva to keep you warm, and stretching views that reach to the crumpled mountains on the horizon. The best of the region’s varietals are found in the resort’s wine tasting room.
More info 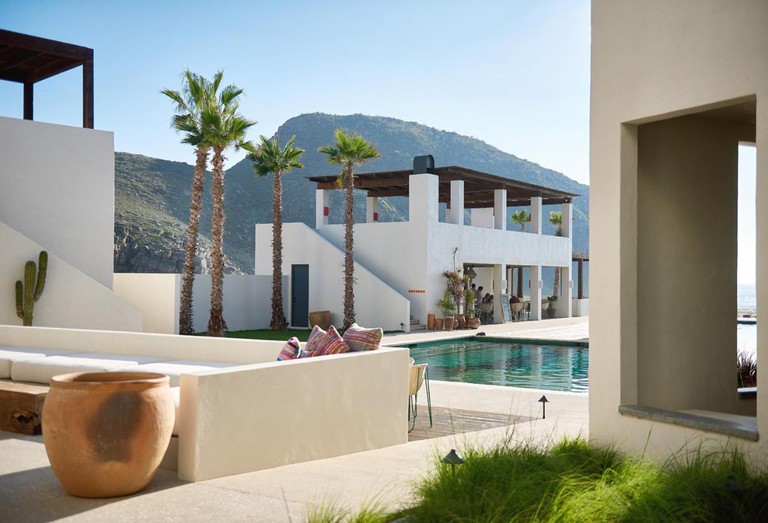 Courtesy of San Cristobal / Booking.com
Book Now
Break free from the luxe resorts of Los Cabos and instead journey to Todos Santos, a beachside town with an artistic persuasion. You can ingratiate yourself with the community by staying at San Cristobal, a stylish boutique right by the ocean. Guests can join a weekly trek, starting in the lobby and taking in the various terrains of Todos Santos. If that all sounds a bit too much like hard work, a beachside pool and restaurant take in plenty of the surrounding beauty. 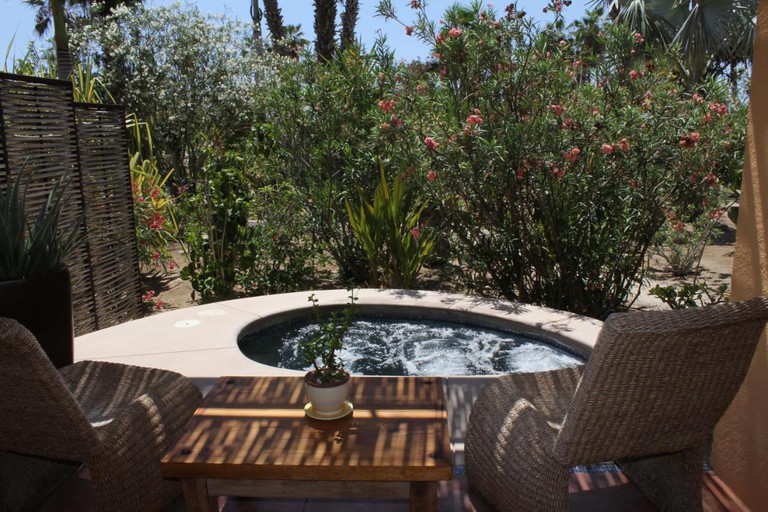 Courtesy of Posada La Poza / Booking.com
Book Now
The dream-made-reality of Swiss couple Juerg and Libusche Wiesendanger, Posada La Poza is the meeting point of European and Mexican style. Its eight rooms and suites are modestly furnished, but interspersed with bursts of Mexican color. Start the day with a free continental breakfast before exploring the boutiques and galleries of Todos Santos (stop off at Libusche’s own on Calle Juarez). Make sure to return by happy hour, though, when all guests get a free glass of wine. 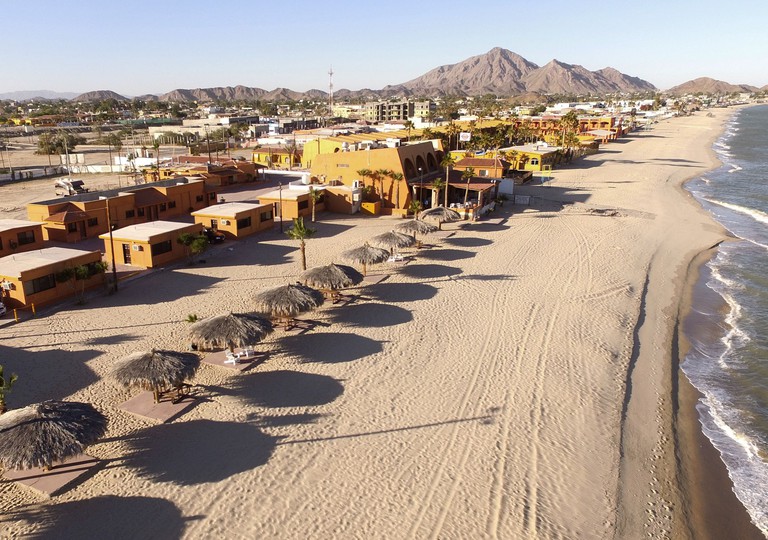 Courtesy of Stella Del Mar / Expedia
Book Now
A short hop – well, 125mi (201km) – from the northern border, San Felipe is a quaint fishing town sitting between desert and the Sea of Cortez. Far from the razzle-dazzle of Los Cabos, it makes an ideal place for a weekend escape. Base it in Stella del Mar, a charming boutique resort of just 14 beachside bungalows. The rooms are unfussy yet comfortable and, most importantly, just steps from the Pacific. Plus, if the sand gravity’s not too strong, the Malecon waterside promenade is within walking distance.
Give us feedback