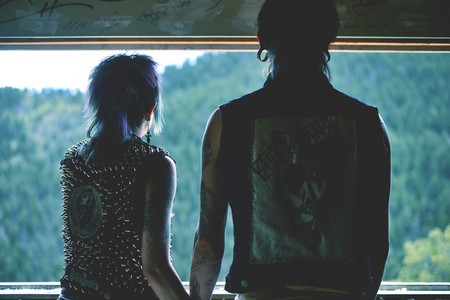 Punk never died in Mexico. Quite the opposite, in fact, as the punk music scene remains one of the capital city’s biggest ‘underground’ subcultures. Born in the 70s, the scene’s roots were developed through the music before fanzines spread the word and the punk movement became the flourishing subculture phenomenon we see today. However, no city adopted punk like Mexico City. Here’s your introduction to the capital’s punk music scene in just 10 key songs.

One of the best acts on the scene at the moment, Tungas are signed to the same record label (Light & Noise Records) as other key exponents of Mexican punk, Joliette, No Somos Marineros and Dolores de Huevos. Dating back over 10 years as a band, they made an indelible mark on the city’s punk scene with their song Brindemos from the 2010 EP El Espíritu del Tiempo, which has since become a classic of the scene.

Size surged onto the scene in the late 70s and early 80s when it was in its formative years and became one of the most influential groups in Mexico City post-punk. Fronted by the incomparable Illy Bleeding, Size is often considered the first Mexican post-punk band – or the first one to reach critical acclaim at least. Influenced by the British punk scene and sometimes singing in English, the song every good punk should know is definitely Tonight.

Formerly known as Dangerous Rhythm (they still go under the same name, just in Spanish), Ritmo Peligroso were contemporaries of the aforementioned Size and consider themselves the first Mexican punk rock band. Whatever the case may be, Ritmo Peligroso were also heavily inspired by international punk sounds and while they quickly moved into the rock genre that would give them the greatest commercial success, some of their early work is crucial for those looking to understand the early years of the Mexico City punk scene.

One of the greatest hardcore punk songs to come out of Mexico City in the 80s was Atoxxxico’s Puerco Policia, which well-represented a genre typically marked by a faster drum beat and shorter songs. To this day, the hardcore punk scene is still going strong in the capital city, but this song, along with the whole Punks de Mierda EP, still remains one of the best introductions to the breakaway punk genre.

Another hardcore punk exponent in Mexico City during the late 80s and early 90s was Massacre 68 (sometimes written in Spanish as Masacre 68). In fact, this band’s original bass player actually deferred to Atoxxxico. In the spirit of a good punk band, their name is an homage to the 1968 student massacre that took place in Tlatelolco, Mexico City, as well as the entire revolutionary student movement of that year. As you can imagine, their songs such as No Estamos Conformes were similarly politically charged.

Moving away from 80s and 90s punk and firmly into the 2000s with De Nalgas. Just like their punk antecedents before them such as Massacre 68, their lyrics are firmly anti-establishment and critical towards the shambolic Mexican government. The brains behind iconic songs like No Me Calles, we consider their deeply critical and most recent (and very Molotov-inspired) single Pare de Sufrir, Pare de Mamar their must-listen track.

Perhaps one of the most notable newcomers on the Mexico City punk scene right now, Olvido are more than worthy of a mention. They released their first EP in June of last year, and while it sounds as homemade as it was, the music still speaks for itself. In fact, they also released a fantastic cover of Kathleen Hanna’s punk classic The Punk Singer last year and describe their sound as ‘angry punk and sad pop-rock’. Their entire demo is worth a listen.

As to be expected from a band called ‘Civil Disobedience’, their lyrics lean towards the revolutionary and political, critiquing everything from religion to the British band The Exploited, as well as championing animal rights. Fitting (ironically) neatly into the anarchic-punk genre, they were one of the most influential groups on the scene in 1990s Mexico and achieved fame across Latin America and the US. Although they’ve since split, one of their most famous songs is No Hay Libertad Sin Desobediencia.

Surfing the wave of punk from its early beginnings in the late 70s, early 80s to the present day, Rebel’D Punk are one of the biggest and most pioneering bands that have stuck through the entire movement and continue to be one of the best on the Mexico City punk music scene. Their style is definitively punk rock, and their reach is international, having done tours in Latin America and the US. Their song Museo del Chopo, named for one of Mexico City’s major punk outposts, is a must-listen.

While Las Hijas de Violencia is technically not a punk band so to speak, they do have one key song which should be on the playlist of anyone wanting to understand the Mexico City scene, punk or otherwise. A performance art group that went viral just over a year ago, they tackle street harassment by blowing confetti and singing the song Sexista Punk at their aggressors.