An Introduction To Café Tacuba In 13 Songs 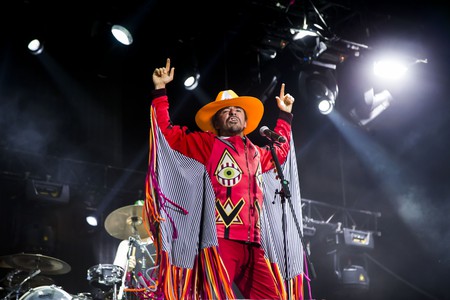 As one of Mexico’s most enduring and popular bands, Café Tacuba are most definitely a must listen for anyone planning on visiting the country in the near future. Since forming in 1989, they’ve released seven studio albums and supposedly have a new one coming out sometime in 2016, yet they continue to constantly experiment with new sounds and styles. With that in mind, here’s a chronological introduction to Café Tacuba in 13 songs.

One of Café Tacuba’s biggest hits ‘María’ was also one of the lead singles from their first and self-titled 1992 album Café Tacuba. The subsequent accompanying video was nominated for the Video of the Year award at 1993’s Lo Nuestro Awards. This song marked them out as a band capable of creating excellent love songs.

‘La chica banda’ was another song from the band’s 1992 album and was also one of the many songs from this album to make direct reference to the mestizo and Native American culture of Mexico. It talks about falling in love with the eponymous ‘chica banda’.

Another entry from Café Tacuba’s first album comes in the form of ‘Las batallas’. Based on the José Emilio Pacheco poem, ‘Las batallas en el desierto’, it’s a classic of the band that continues to be played and requested at their concerts to this day. It also gets bonus points for combining two important elements of Mexican culture in one fell swoop.

Featured on the 1994 album Re – which many claim was and continues to be the most influential of all the band’s seven albums – this upbeat song features perhaps the most iconic Café Tacuba intro of all time. As a result of the final line, which mentions ‘man to man’, it’s also considered to be a homosexual love story.

Another classic from their Re album, ‘Ingrata’ is a song that pays homage to norteño music and lyricises a response to the eponymous ‘ingrata’ (‘ungrateful woman’) of its title. ‘Ingrata’ also marked this album out as the perfect example of Café Tacuba’s ability to seamlessly switch and adapt their sound to multiple musical genres, such as banda and norteño.

One of the bands most enduringly popular songs, ‘Las flores’ was also featured on the immensely influential Re album. Almost brutally upbeat, it features the excellent and unmistakeable vocals of Rubén Albarrán, and an admittedly slightly odd video.

A tongue-twister of a song from start to finish, ‘Chilanga Banda’ is a head first dive into the world of chilango (Mexico City) slang. Not unsurprisingly, this is the city Café Tacuba themselves are from. ‘Chilanga banda’ featured on their third album, Avalanche de éxitos, and namedrops several Mexico City subcultures, such as pachucos, cholos and chundos.

Another hit from this genre-shifting album of cover songs is ‘Como te extraño mi amor’, which was originally by Leo Dan. Throughout the song, a distant ‘amor divino’ is appealed to, and asked to return. Over 10 years after it was released, it was included on director Alejandro G. Iñárritu’s Biuitiful (2010) soundtrack.

This is one of the band’s top five songs according to their guitarist Joselo, and was a part of the Amores Perros soundtrack (which is one of Mexico’s must-see films). Sung not by the usual lead singer Rubén Albarrán, but instead by Meme del Real, it may not sound like classic Café Tacuba but it’s one of their best songs for sure.

Featured on Café Tacuba’s lesser known tribute album Vale Callampa, which was actually dedicated to the Chilean trio Los Tres and covered their songs, ‘Déjate caer’ was a huge hit in 2002 for the group. Meaning ‘let me fall’ it continues to be one of their most popular songs, despite not being an original Café Tacuba track.

Perhaps the most emblematic of all the Café Tacuba songs, this 2003 offering was the third single from their hugely successful Cuatro caminos album and is now a modern classic of a love song. Meaning ‘you are’, the singer directs his lyrics towards the girl of his dreams, telling her she’s ‘the only one he loves in all the world’. Just hope that this, and not 1996’s ‘Ingrata’, is the Café Tacuba song you have dedicated to you!

‘Volver a comenzar’ was featured on the LittleBigPlanet soundtrack and on the band’s sixth studio album, Sino, and is especially notable for bringing the sound of Café Tacuba to a wider audience, beyond that of Latin America. Apart from international acclaim, it also won the group a Latin Grammy nomination for Best Alternative Song in 2008.

From their final album to date, El objeto antes llamado disco, ‘Aprovéchate’ was the third single released after ‘De este lado del camino’ and ‘Olita del altamar’ (both of which are also worth listening to). Their guitarist Joselo provides the lead vocals on this slow paced but beautiful song.